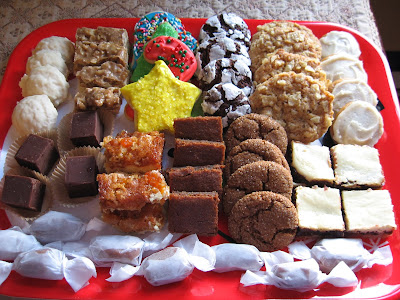 Since I went all out and made a dozen different holiday cookies/bars/candies this year, I figured I better do a blog post review and recap, as I tried many new recipes!

Cream Cheese Meltaways with Lemon Glaze
These have been a HUGE hit the past two years in a row -- there's never any left on the tray at the end of a party, and several people have asked me for the recipe.  If you like lemon even a little bit, make these -- you won't be sorry.  :)  (Plus, they are really pretty easy!)

Maple-Walnut Bars
A new recipe I tried this year, and although they are delicious, they are far from perfect.  :(  For starters, they were nearly impossible to cut without shattering the bars, (the crust largely crumbled into oblivion, and the topping frequently separated from the crust,) and personally, I don't think they have enough maple flavor to suit my tastes.  (The recipe called for 1/4 cup maple syrup in the topping, to which I added some maple extract, and it still wasn't "maple-y.")  I might ditch these next year in favor of the Maple-Walnut Spice Cookies I made last year.

Sugar Cookies
Even though these are far from "fancy," these are still one of my favorite cookies on the tray.  In fact, I may have one with my tea right now.  ;)

Chocolate Crinkles
I'm not a huge chocolate fan, although I do enjoy chocolate-mint things around the holidays.  I added some peppermint extract to these babies . . . delicious!  Beautiful!  Although, I have to confess, not great keepers -- after a few days, their texture has gone downhill and I'd now describe them as a little stale/dry.  :(  Definitely won't be one of the cookies I make in advance next year!

Potato Chip Cookies
Yeah . . . potato chip cookies.  Salty, sweet, crunchy, chewy, nutty, buttery . . . holy hell.  My only complaints were as follows: 1. wish I would have refrigerated the dough before rolling, as it was kind of a sloppy mess, 2. the recipe didn't call for nearly enough ounces of potato chips to meet the quantities of crushed chips called for, and 3. I baked them a couple of minutes too long, so they were on the crispier side.  Next year, I'll fix all of those things and we'll have cookie nirvana.  ;)

Pumpkin Cookies with Brown Butter Icing
A new favorite, and a repeat for years to come, I'm certain.  These soft, chewy, pillowy cookies are topped with the most flavorful icing ever.  I didn't think I could like pumpkin cookies without cream cheese icing . . . I was wrong.  These have also been awesome keepers (in the fridge) -- soft and perfect for days.

Buckeyes
Yeah, you're right . . . those squares look nothing like buckeyes.  That's because the recipe as-is is an epic fail, (c'mon, Real Simple, you've never let me down before!)  After chatting with a friend of mine about this, I've determined the original recipe is missing at least 2 cups of powdered sugar in the peanut butter base, maybe as much as 4 cups.  So, what did I do to rescue this year's batch?  I dumped the peanut butter slop into the pan of melted chocolate, added a few splashes of cream, melted the whole shebang down, and cooled it in my silicone pan.  Ta-da!  Fudge?  Not really.  Truffle?  Not exactly.  But peanut-butter-chocolatey delicious, and flying off the cookie tray faster than you can say, "fail, rescued!"

Apricot Coconut Bars
These are another repeat that I have received many compliments on and requests for these past couple of years.  However, I'm not entirely pleased with them -- basically, the crust is a crumbly mess!  Boo!  I was convinced the problem was that I was using a 9-inch pan, (the recipe calls for an 8-inch,) and the crust was falling apart because it was too thin.  This year, I used an 8-inch pan as directed, but no . . . still a mess!  Next year, I'm going to try chilling the bars before cutting, and making sure I flip the bars and cut them upside-down.  Any other suggestions?

Ginger Bars
This recipe has been on my back burner for years of holiday baking, and I just got around to it this year.  Frankly, they are simple to prepare and delicious, (moist, chewy, and faintly spicy,) but nothing special.  I'd take a gingersnap or gingerbread person any day of the week!  (And one problem that I didn't anticipate is that many people think they are a brownie!  Oops!)  I'm definitely not going to delete the recipe from my bookmark list, but will likely return to making gingerbread people next Christmas.

Chewy Gingersnaps
A perfect, classic, simple gingersnap recipe -- nothing fancy, which is ok, in my opinion.  :)  I've made gingersnaps with candied ginger or fresh ginger in the past, and sometimes, all you want out of a gingersnap is a soft, chewy, spiced molasses cookie.  This recipe delivers.  (P.S. they've kept beautifully -- still soft and chewy days later!)

Fig and Cream Cheese Bars
This is another recipe that I have been eyeing for years, and finally got around to trying this year.  WHAT WAS I WAITING FOR????  :)  Totally a new favorite of mine, and a hit with all who love figs.  Moist, with a crunchy yet sturdy crust, chewy from the figs, with just enough tangy cream cheese layer on top to offset the sweet richness.  The crust has softened with refrigeration, but still has just enough "bite" to it.  Good thing these bars are out of sight, as otherwise they might already be gone!  (Additionally, these look impressive, but were actually pretty easy to prepare, as you don't have to pre-bake the crust -- just layer the three different components in the pan and bake!  Pretty simple, if you ask me!)

Golden Vanilla Bean Caramels
I didn't make these last year, and everyone missed them.  These are moist, chewy, intensely flavorful caramels, (it's the golden syrup, I swear . . . the caramels have more depth and are less tooth-achingly sweet than most,) that are only improved by the addition of coarse salt at the very end.  Our friends' picky four-year-old snuck three of these in a row while the adults were chatting over coffee, if that gives you any indication as to their appeal.  :)

Other highlights from this holiday season include returning to the church choir just in time to sing for Christmas Eve, (always a late night, but always magical,) having a chance to see "White Christmas" on the big screen at the Riverview, (we had so much fun, we're already planning on making time to see "It's A Wonderful Life" next year,) plenty of get-togethers with family and friends, and the gift of an iPad!  I feel a little extreme in the technology department right now, (iPhone, iPad, and MacBook all at my disposal . . . sheesh!), but I have a feeling the iPad will become my primary "device," especially when it comes to using bookmarked or other digital recipes in the kitchen.  (An expensive "cookbook," but an extremely useful one!)

COOKIES! I definitely need to try those fig & cream cheese bars...as soon as I've recovered from our holiday sugar explosion. :) Hope you had a fabulous holiday!