There is a lot going on in the world to do with "pumpkin-spice" these days ... a lot of passion, both for and against the "issue."  Personally, I do enjoy pumpkin/squash foods in the fall, (pumpkin pie, pumpkin bread, pumpkin muffins, pumpkin bars, pumpkin oatmeal, pumpkin soup, pumpkin curry,) and warm spices such as cinnamon, ginger, nutmeg, and cloves just pair beautifully with the vegetable.  Pumpkin muffins have always been a favorite of mine, (fresh from the oven and spread with softened cream cheese in my perfect world,) and I've been known to make a pumpkin pie in July at least twice.  What's not to like?  Pumpkin-spice just makes sense.  Cooks for centuries have been pairing spice with pumpkin, long before "PSL" became a "thing."  I'm definitely pro-pumpkin-spice!

I also love coffee.  Like, LOVE coffee.  The smell, the taste, the feel of the warm mug in my hands, everything about it.  Even though I quit caffeine earlier this year, I still look forward to that cup of decaf each morning.  As my friend Dora wisely proclaimed, "coffee isn't a beverage - it's an experience."  It's so much more than a jolt of caffeine.  A cup of coffee, (and yes, even decaf,) is a ritual I would be hard-pressed to start my day without!  So, yes, I'm pro-coffee, obviously.

I suppose being pro-pumpkin-spice and pro-coffee makes me pro-pumpkin-spice latte?  I certainly wouldn't call myself Starbucks' #1 fan, (mostly because I really just don't care for their coffee,) but a couple of my coworkers share a passion for the "PSL."  Since I'm too broke right now to pay five bucks for a cup of coffee but not one to be left out of a culinary trend creating this much excitement, I decided to try my hand at making my own "PSL" at home.  Needed to see what all the fuss was about, y'all. 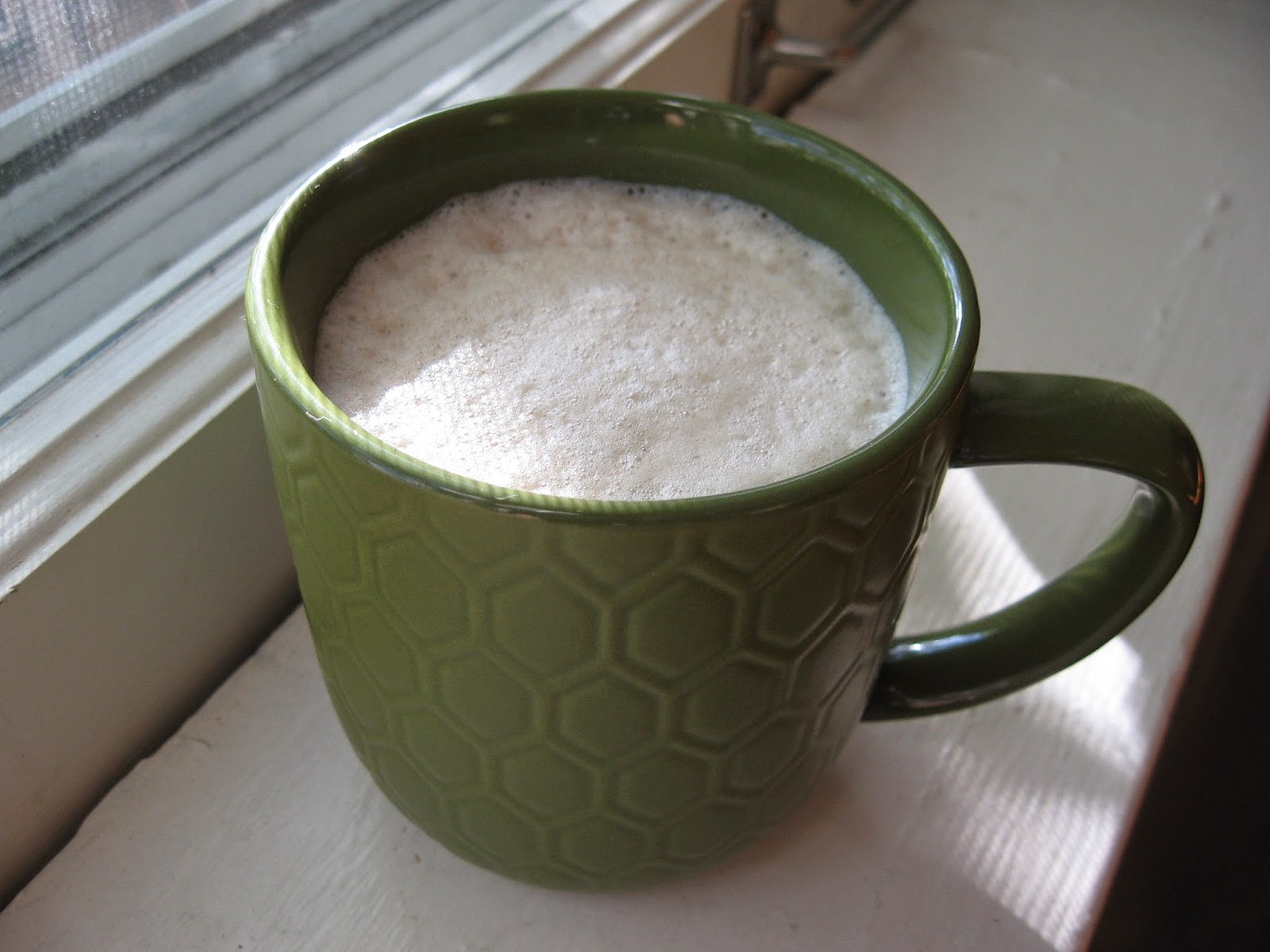 Since I own neither an espresso machine nor a milk frother, I needed to think outside the box a bit and use the tools I had at my disposal.  I have been using a Toddy to brew coffee for years, and figured, Toddy concentrate is a bit like espresso, at least in its level of coffee-intensity.  (Yes, I know . . . Toddy concentrate and espresso really are nothing alike, but since you lose the subtlety of an expertly-brewed espresso shot the second you dump it into a mug full of milk, I don't think anybody will notice, right?)  I also happen to have a Ninja blender, and figured with a few seconds of blending, I'd get a decent froth from heated, whole milk.

Directions:
Combine all of the ingredients except for the vanilla in a small saucepan.  Bring to a high simmer, cover, and cook for 8 to 10 minutes, stirring occasionally.  Strain the syrup through a cheesecloth-lined strainer.  Stir in the vanilla.  Cool, then store in the fridge.

I then combined 1 tbsp of my homemade Pumpkin-Spice Latte Syrup with 3/4 cup whole milk and 1/4 cup Toddy coffee concentrate, heated the mixture to just below boiling, poured the whole thing in the blender, and blended the heck out of it for a few seconds.  Voila!  A wholesome, homemade, all-natural, organic PSL, brimming with foam.  Delicious, slightly-sweet, creamy, subtly spiced, and a nutritional bargain at 148 calories; if you use unsweetened almond milk instead of the whole milk, you'll enjoy a mere 58 calories!  (Yes, I'm counting . . . forgive me?)  (By the way, almond milk will give you considerably less foam using this method, but it's still delicious.)

I'm glad I hopped on the (homemade) PSL bandwagon.  Won't you join me?

I too LOVE coffee and what I like to do when I'm craving that pumpkin flavour is I'll add pumpkin pie spice mix right to my coffee grounds then brew my coffee and its perfect - all the pumpkin flavour but not too sweet (not sweet at all actually because I drink my coffee black, no sugar added). On the very rare occasion I feel like a creamy coffee I'll do as above but I'll make this creamer to use. Its wonderful - very rich and creamy very close to cows milk cream (I think, its been 7 years so I might not be the best judge but from what I remember - spot on!)
http://www.mindbodygreen.com/0-14979/diy-dairy-free-coffee-creamer.html?utm_campaign=recommendation&utm_medium=interfeaturebottom&utm_source=feature