I heard about the inaugural Twin Cities Donut Crawl a few weeks ago, and quickly made plans with a friend and her daughter to attend.  A good thing, too, as tickets went FAST!  My friend picked up a regular ticket, which included three exclusive donuts from three local donut shops, t-shirt, and donation to Second Harvest Heartland, and I went for the VIP pass -- double the donuts (thankfully I had my friend's daughter there to help me eat them,) t-shirt, donation, and hoodie -- sa-weet!  (Both literally and figuratively.)

As Donut Crawl Day drew closer, the excitement was mounting -- people who had purchased tickets grew more and more fired up for the event, people who hadn't were sorely disappointed, as the crawl sold out in only a week.  That is, until ... the organizers opened up a second crawl date (tomorrow!) to meet the high demand for tickets!

The weather was was damp, cold, and grey this morning, but no amount of crummy late fall weather would stop hardy, hungry Twin Citizens on the hunt for amazing donuts!

Registration was speedy and well-organized -- we picked up our swag, punch cards, and complimentary coffee from Five Watt in a matter of minutes, and headed out to our first stop. 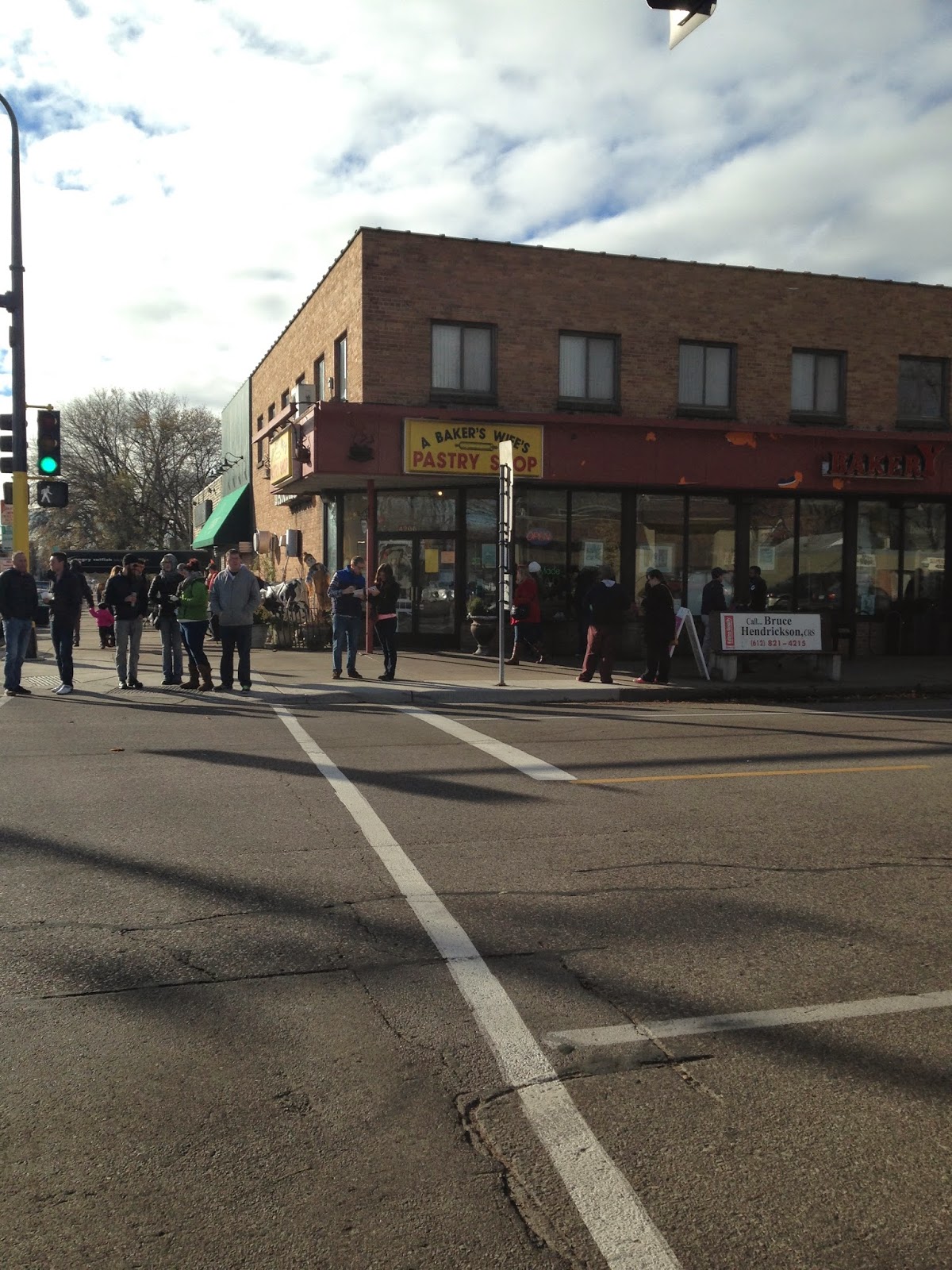 I've been familiar with cake donuts from A Baker's Wife for some time now, as they make frequent appearances at my place of employment on "donut Friday."  I was thrilled to learn Baker's Wife would be on the crawl, because their cinnamon-sugar cake donut is one of my top-10 all time most favorite treats EVER. Probably the best donut I've ever had! 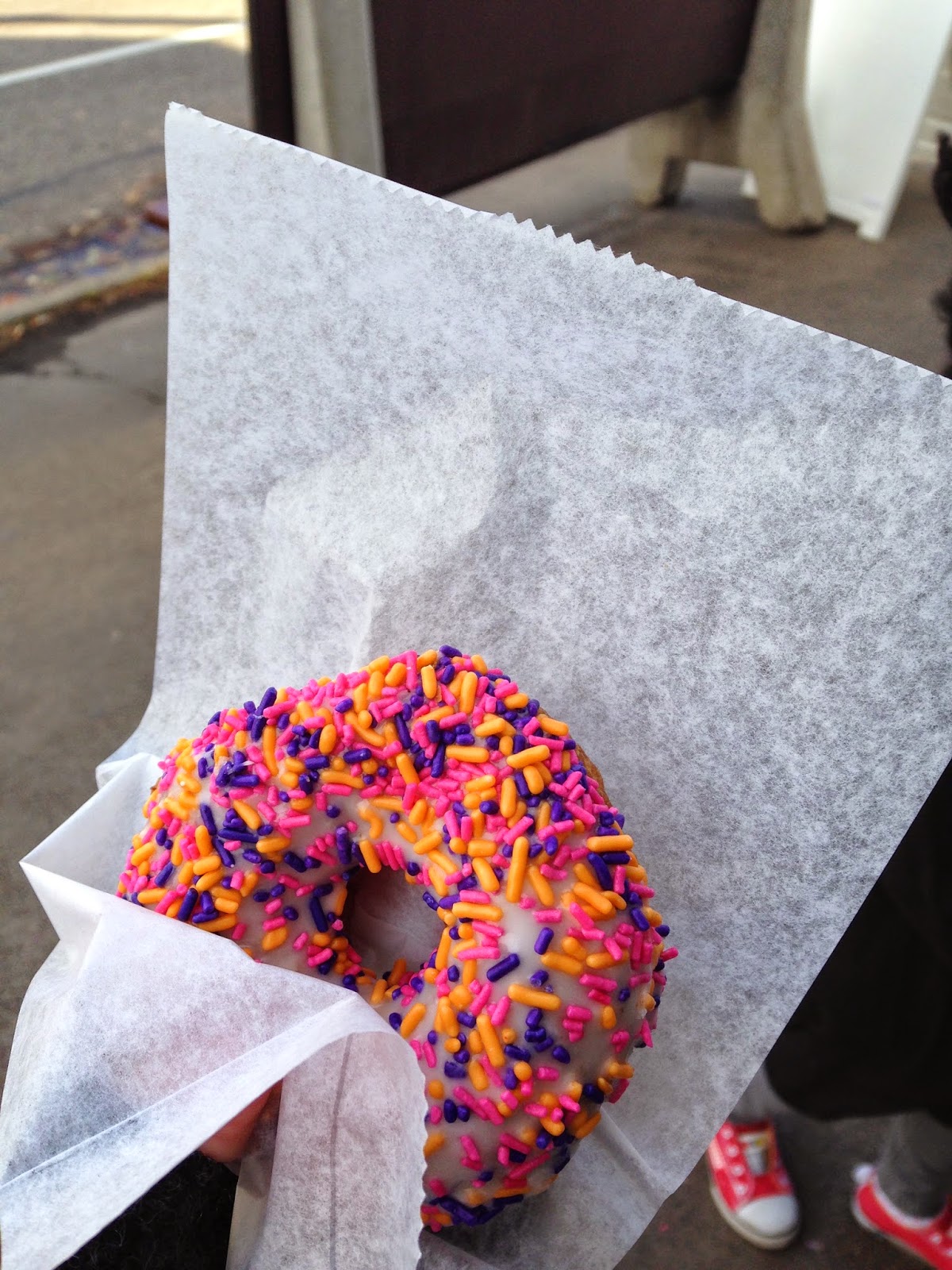 At each shop, we were greeted by tables full of exclusive "specialty" donuts just for us "crawlers" (crullers?) and willing helpers ready to punch our passes.  At Baker's Wife, we chowed down on their fabulous cake donuts, smothered with vanilla icing and sprinkles. 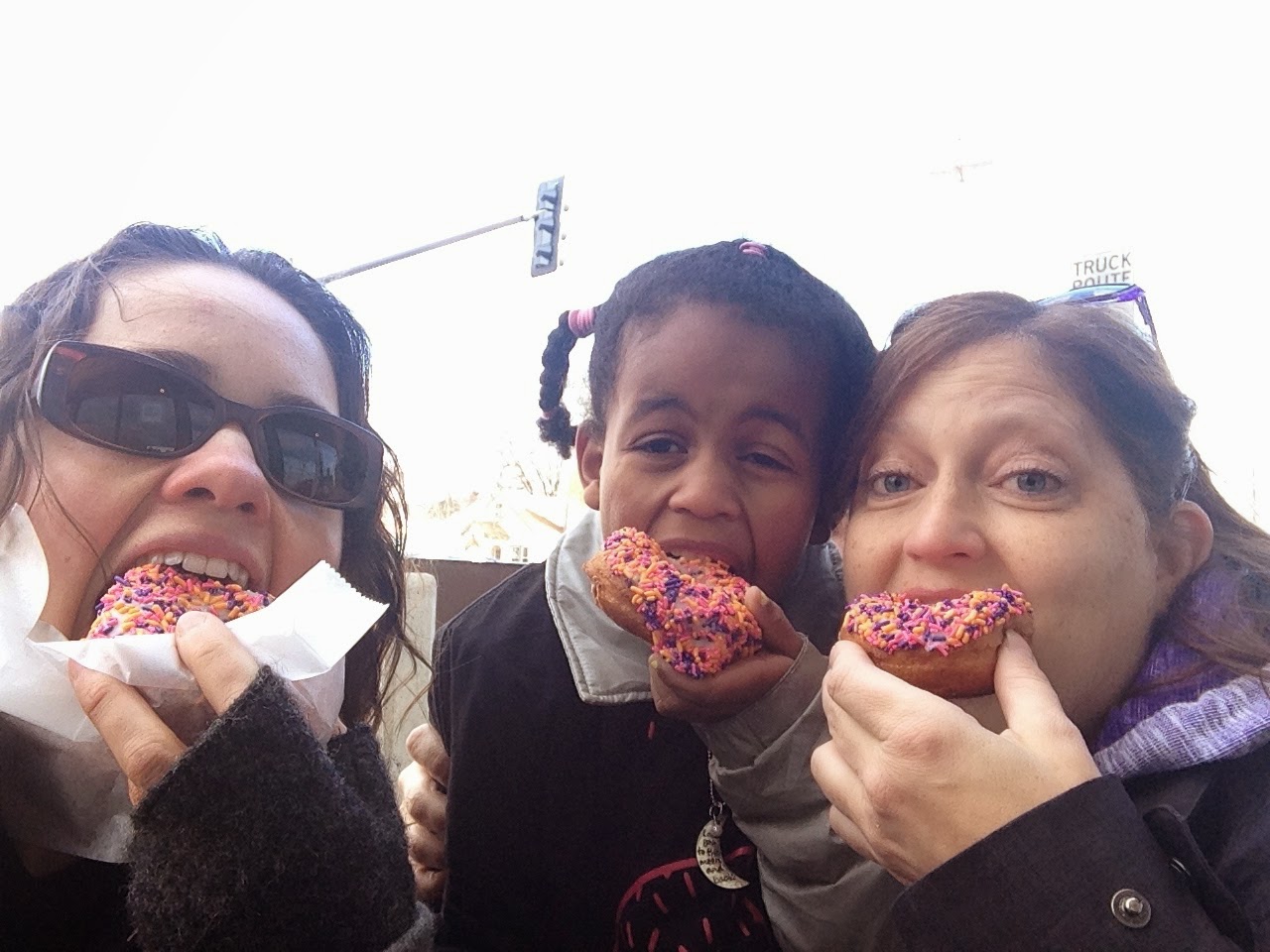 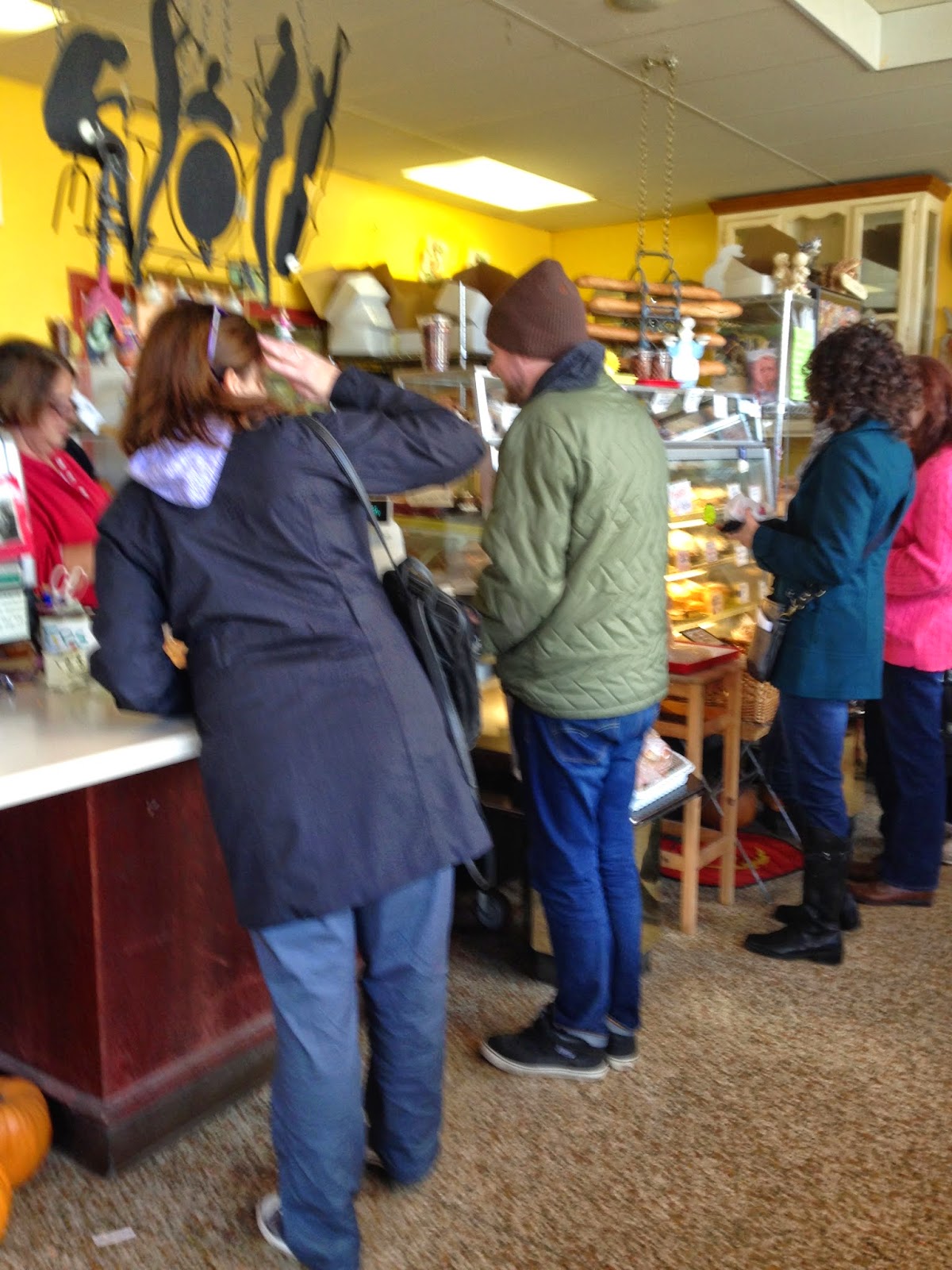 Inside Baker's Wife, there's barely enough room to turn around, but that's ok -- you get in, you order, you pay, you're on your way!  They have their incredible donuts, plus breads, cookies, pies, cakes, and other pastries for pre-order or grab-n-go.  My friend picked up two loaves of their double-sourdough bread -- a few sliced of which she shared with me, and ohmigosh, this bread is worth going out of your way for!  (She also surprised me with an extra donut -- cinnamon-sugar --  "for tomorrow."  'Cause I need extra donuts after today?  :)  I can't wait for breakfast tomorrow morning!) 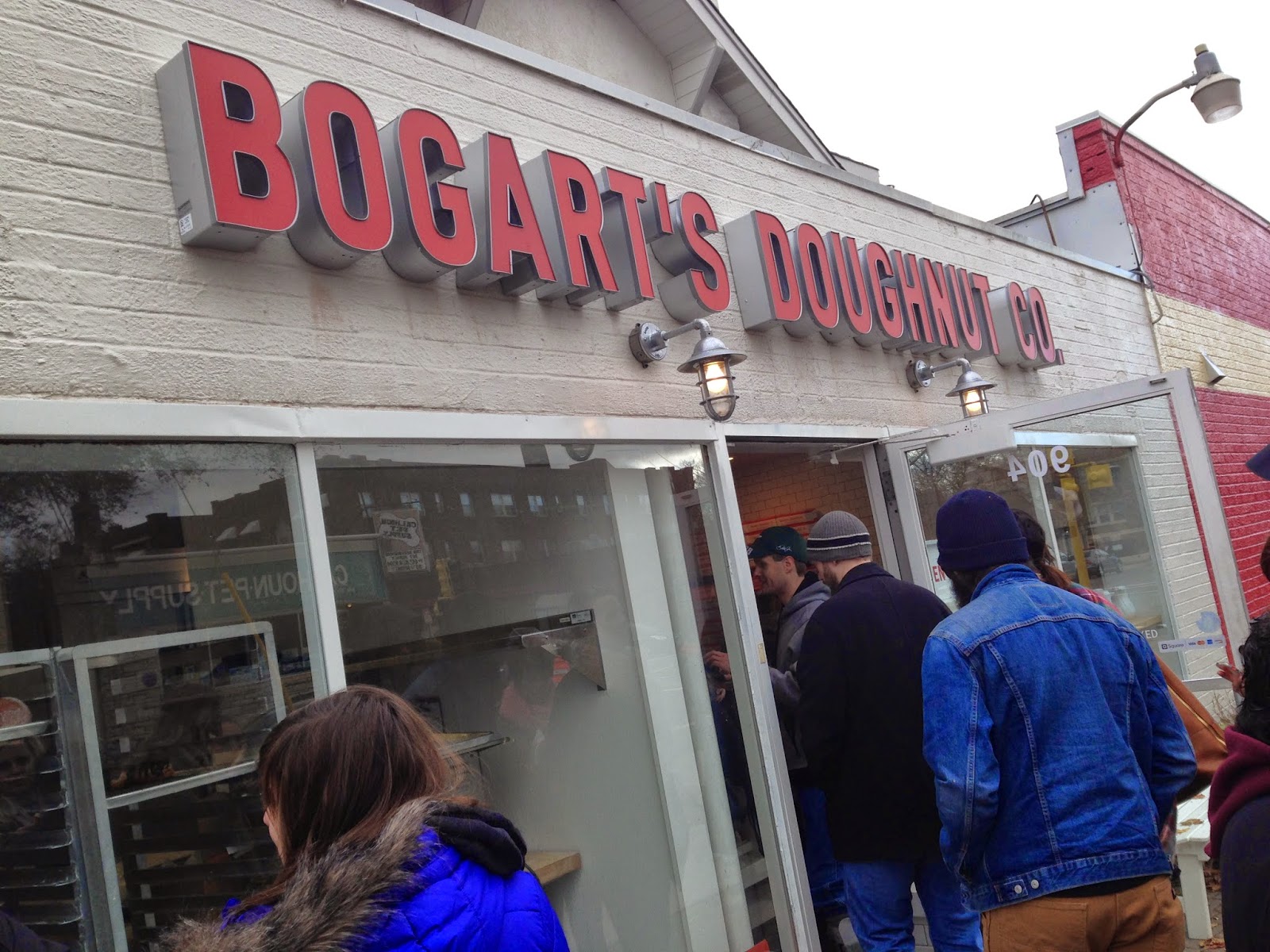 Our second stop, Bogart's Doughnut Co, was just as exciting as the first.  Bogart's has been receiving quite a bit of buzz and positive press since they first opened, as they employ a genius marketing technique -- they are open early in the morning until sold out! Get there and buy yer donuts, quick! 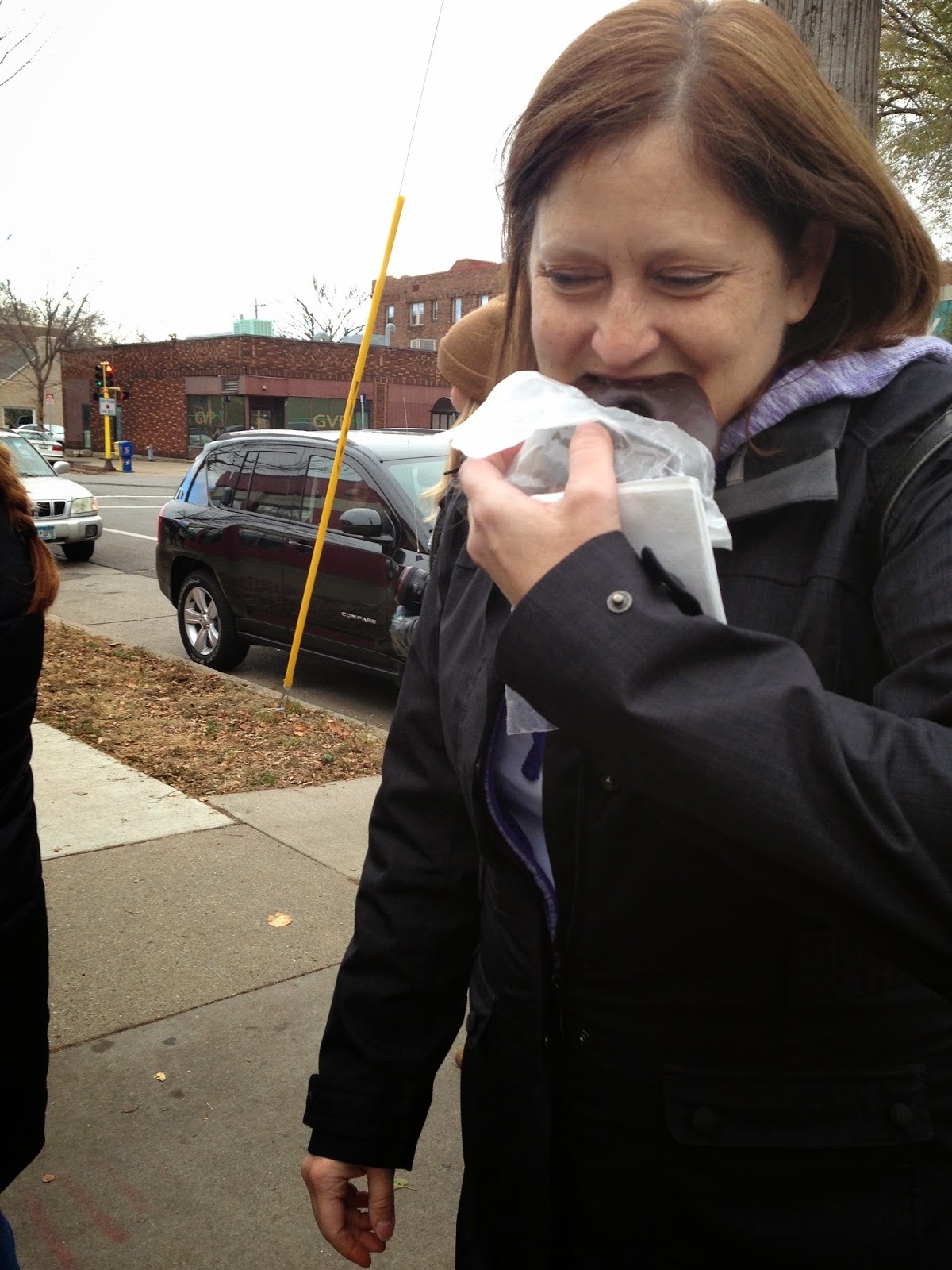 Bogarts treated us crawlers to their from-scratch yeasted brioche dough smothered in a dark chocolate glaze (an off-menu creation just for the event.) Although I'm generally not a fan of chocolate donuts, (they always seem to taste a little "fake" to me,) this was one delicious donut.  No fake-chocolate taste at all -- just rich, fluffy, slightly tangy dough, covered with a not-too-sweet chocolate glaze.  Although I tend to prefer cake donuts over raised donuts, this treat was a definite winner. 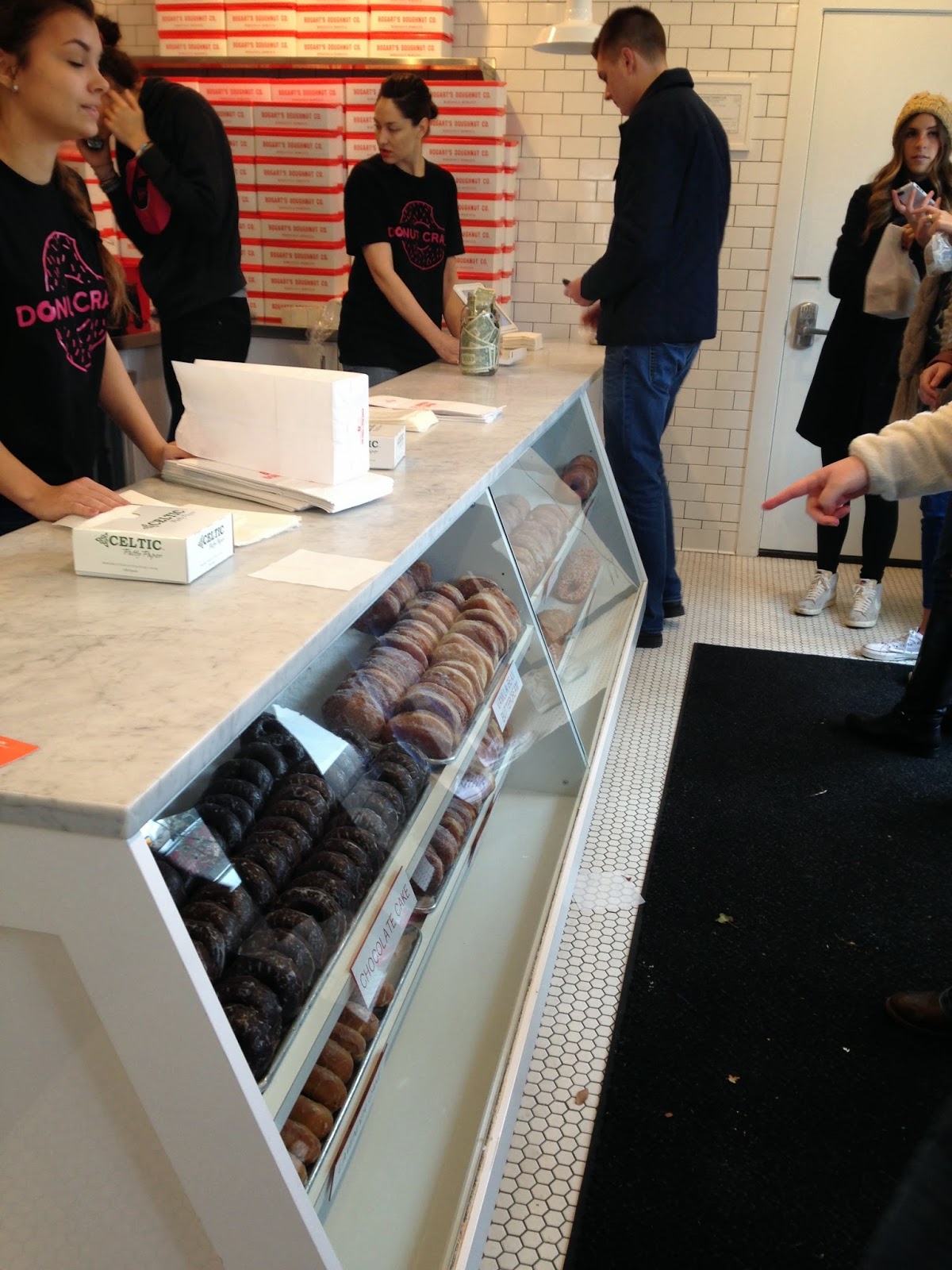 I can't wait to get back to Bogart's to try their lavender cake donut! 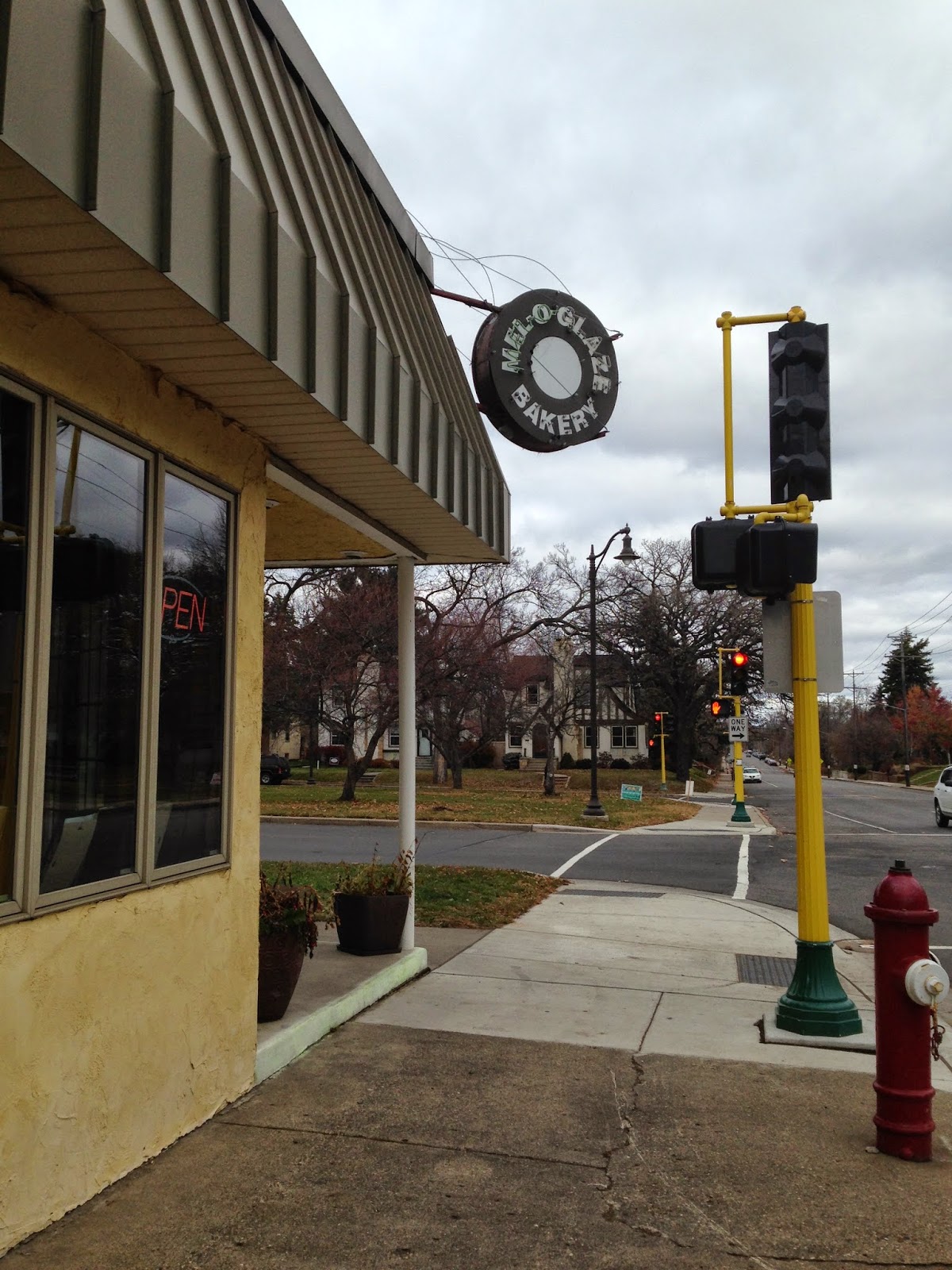 Our final destination, Mel-O-Glaze Bakery, has been serving up donuts to south-Minneapolitans for many, many years.  I had never heard of Mel-O-Glaze before signing up for the crawl; I am always excited to try someplace new! 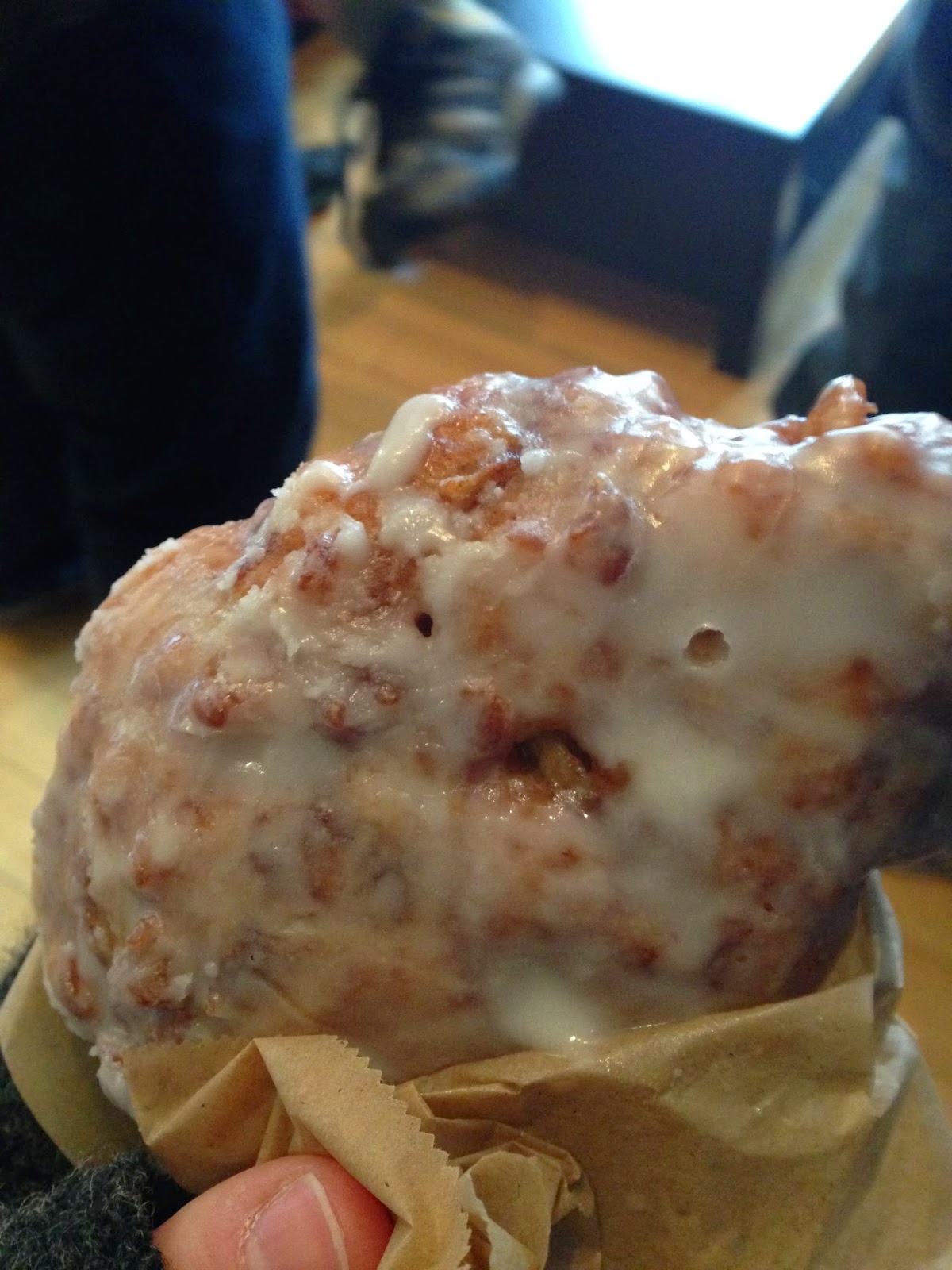 Here we have a still-warm apple fritter.  Do I even need to say more?  Even though I was pretty full from the first two stops, I managed to gobble up this baby no problem.  Mmmmmm .... 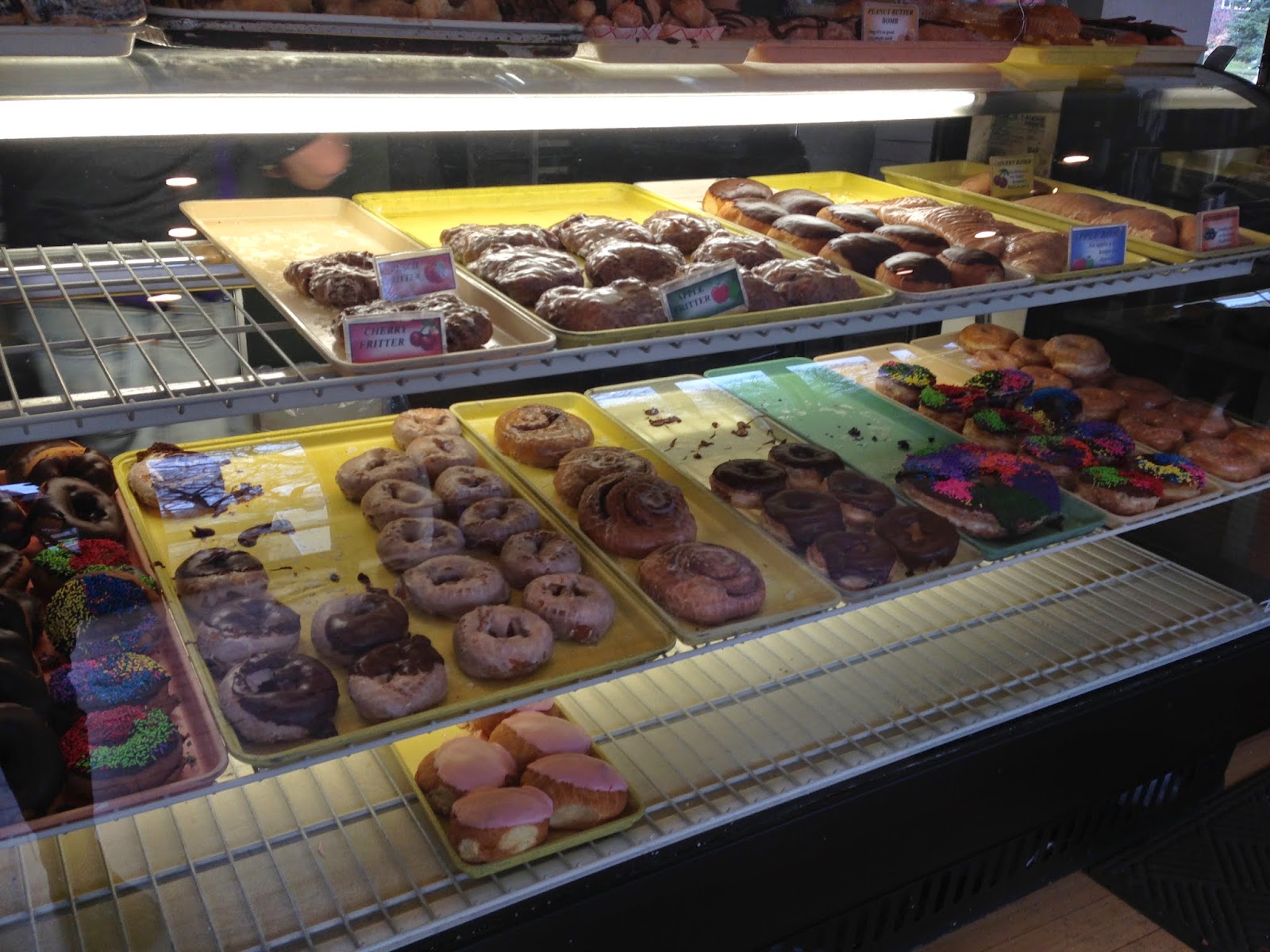 Mel-O-Glaze had a variety of donuts, breads, cookies, cupcakes, and other treats available -- my friend picked up a loaf of cheddar-jalapeno bread.  I can imagine that would make a righteous grilled-cheese sandwich or stellar accompaniment to a steaming bowl of chili! 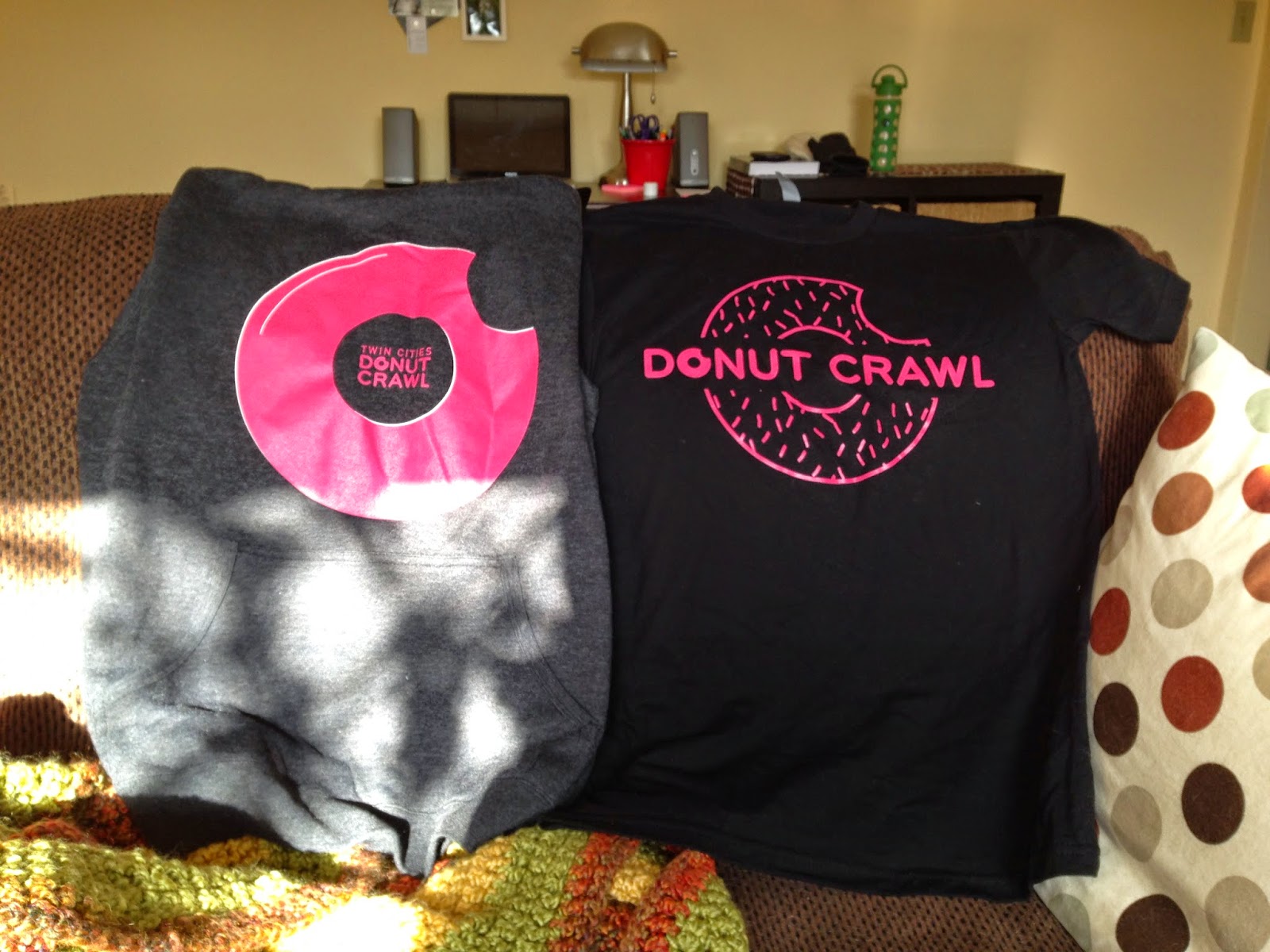 My VIP swag is so awesome!  The hoodie is soft, cozy, and comfortable, and I love the graphics on both!  (And that the tee and hoodie have different designs!)

The first annual Twin Cities Donut Crawl far surpassed my expectations -- the event was skillfully planned and totally snafu-free, the donuts were delicious, and the shirts are awesome!   (I also wasn't sure I could safely consume three donuts in one morning ... I needed a cup of peppermint tea and a walk when I got home, but I managed to tuck into all three with gusto!)  I also appreciated that Second Harvest received a hefty donation from crawl proceeds -- I'm excited to learn how much was raised by crawlers!

(I hope they serve decaf next time ... I'm still buzzing, since I quit caffeine 10 months ago!  Wee!)

(Please note ... I don't know whether any of these three shops are actually serving vegetarian donuts.  Many bakeries do still use lard for making donuts, and I am well aware of this fact ... let's just call this a "visual vegetarian" moment, m'kay?  If you are planning on visiting one of these shops and are a more strict vegetarian or vegan, I'd recommend calling first!)
around 6:49 PM
categorically speaking: donut crawl, donuts
Location: Minneapolis, MN, USA

What fun! I have never heard of any of those places except Mel-O-Glaze, but they sound fantastic! I miss Minneapolis :)