disasters in gluten-free baking (plus a dinner and shoes!)

We have treats during our break at church choir rehearsal every week -- usually some kind of baked good (muffin, cookie, etc.,) plus fruit or veggies. The whole "treats" thing started when folks found out that a lot of people were coming to rehearsal straight from work and not eating dinner, so people started taking turns providing a substantial snack during our 8:30 break.

It was my turn to bring treats this week, so I decided to try my hand at some gluten-free baking. (One of the folks in the choir is gluten-intolerant.) Originally, I had planned on making two different kinds of mini-muffins -- a gluten-free banana, and the vegan spiced chocolate muffins I made a couple of weeks ago. THEN, I forgot to borrow Courtney's mini-muffin pan! Egads. So, I decided to just make loaves of quick bread.

Tuesday night rolled around, and I was in a time crunch -- tired, ready to sit down and eat dinner and watch a movie with Dan, I decided to just make a larger batch of gluten-free banana bread. I threw the breads together, stuck them in the oven, and sat down to dinner. Later, I smelled something . . . opened my oven and found that the breads had overflowed all over the oven floor! Crud. (The lady I talked to at the co-op said I could use the gluten-free mix she recommended in place of flour in a regular recipe . . . then I read the back of the package and learned that the mix recommended that I do that, but cut down the fat and leavening. Sheesh!)

At that point, I was ready to give up and go to the store the next day and just BUY something for choir treats. However, later Tuesday night, I decided to try one more time, and make a nice, safe, simple treat -- chocolate chip cookie bars. 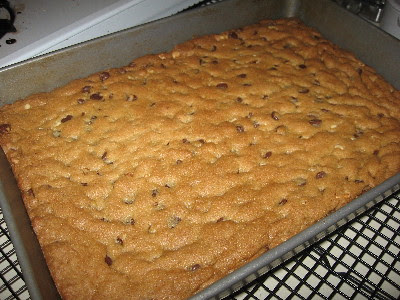 Full of wheat (and not vegan -- I used an egg, although they were dairy-free,) I threw in the towel in regards to gluten-free baking . . . at least this time. I have a half-package of mix to use up yet -- we'll see what I end up doing with it.

(The bars were a hit, by the way -- only about six made it home at the end of the night!) 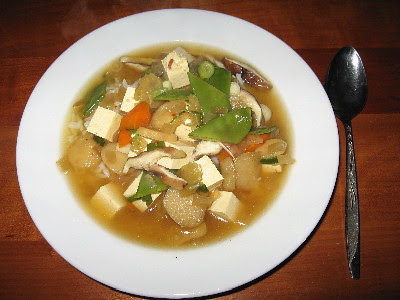 I have to admit, I was a little worried about this recipe at first, because, honestly, it smelled a little funny. However, it was delicious, and very easy! I highly recommend this simple crock pot soup -- you start the broth in the morning, add the tofu, mushrooms, snow peas, and green onions when you get home, make some rice, and dinner is ready! Nice and spicy without being over the top, this soup is flavorful, healthy, and fantastic! 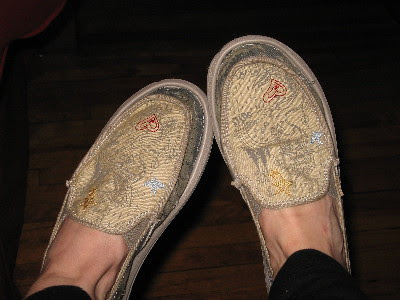 So, I learned a couple of weeks ago that it's not recommended we wear sandals in Haiti -- the streets are pretty dirty, and I guess it's quite easy to pick up some kind of bug just walking around. I have plenty of closed-toe shoes, but most of them are suited to fall/winter/spring in Minnesota -- not a hot, humid, tropical climate. I do have a pair of Vans, which I will bring along, but I wanted a second pair of shoes in case we get caught in a rainstorm and/or I step in something totally gross and need to rotate out a pair of shoes. Here come the Sanuks! I had never heard of these shoes before, but found them on shoes.com when I searched "vegetarian." They are a flip-flop bottom with a light, canvas upper, cute as heck, (the color of my shoes was called "scribble,") and surprisingly comfortable. I hope they will be just the thing for my trip!

I just discovered your blog and all I can say is WOW! Can't wait to try some of your recipes...thanks!

Oh no--I am so sorry about the banana bread! I hate wasting food/ingredients/etc...that is so annoying. It sounds like your cookie bars were a hit, though.

Your shoes look so cute! I love them!

Courtney
PS I told you I would be happy to drop off the mini-muffin pan, silly! Mini-muffin cookies, perhaps?!

Wait, I'm out of the loop- you're going to Haiti???! Lucky! I can't wait to hear all about your trip.