We had been carefully planning our vacation for weeks, and when the day finally arrived, we got a later start than we had originally planned -- Dan was convinced the cold he had been nursing was strep throat. So, after a trip to urgent care, a negative strep result, and pizza out for lunch, we finally loaded up the car and headed northwest to Lake Itasca State Park.

On our way, I saw the strangest sight from the highway: 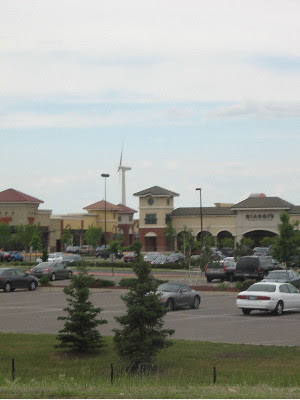 We had estimated it would take us about four hours to drive to Itasca; between mysterious mid-afternoon traffic as we were leaving the city and some highway detours on our way there, the drive took more like five hours. No worries though, since we had plenty of daylight left to set up the tent, eat dinner, and go for a short hike.

The sun was setting as we headed towards the headwaters of the Mississippi river: 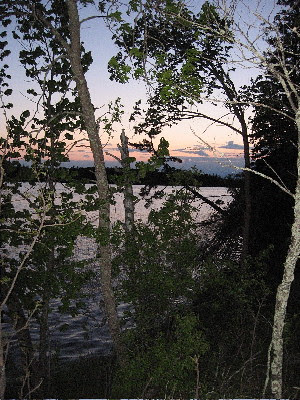 By the time we arrived at the headwaters, there wasn't enough light left to take photos -- and we needed our flashlights for the hike back to our campsite. It was a nice, short hike, and good to stretch our legs after such a long time in the car. We had to be especially careful on our hike back, since the path seemed to be covered with frogs! We used our flashlights to scare them off the path as best we could, and tread carefully.

Is that wind turbine in Maple Grove?! They totally have some there if it isn't, and I agree--it is SO weird to see them among the new malls and construction...but, like you say, it is a good thing!

Is that Albertville? How have I NEVER noticed that before. Granted, I haven't been there for like 3 years, but still...was I so distracted by shopping to not notice a wind turbine?

Glad to see you had such an amazing trip. I love all the stories and photos!