The August 2009 Daring Bakers' challenge was hosted by Angela of A Spoonful
of Sugar and Lorraine of Not Quite Nigella. They chose the spectacular Dobos
Torte based on a recipe from Rick Rodgers' cookbook Kaffeehaus: Exquisite
Desserts from the Classic Caffés of Vienna, Budapest, and Prague.

I took a few liberties with the challenge recipe this month, choosing to flavor my Dobas Torte using a chocolate-mocha theme. I split the sponge cake batter into two batches, adding cocoa powder to one for a chocolate/vanilla alternate layered contrast, used a mocha buttercream recipe (rather than the cooked dark chocolate buttercream recipe from the challenge,) and substituted Toddy coffee concentrate for the lemon juice in the caramel cake "fans" on top of the cake, thus creating a coffee-caramel crunchy top. Oh, and I propped up the "fans" on chocolate-covered espresso beans, rather than on hazelnuts. 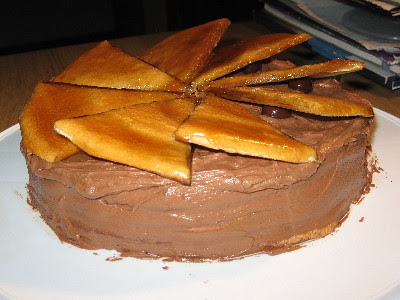 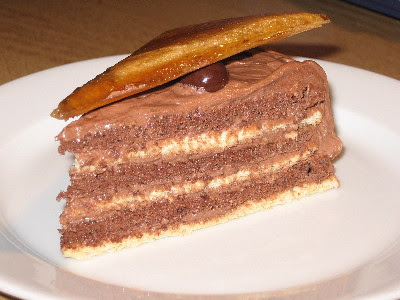 My thoughts? Sorry guys, I just don't like cake very much. (I must confess . . . I ate about half a slice of this treat before pitching the rest of my portion. Sugar overload!) I dig a batch of cupcakes once or twice a year, but this recipe is just WAY too sweet for me -- too much frosting, too much sugary caramel topping, just too much. I'm going to pass this around to friends/family, though, and see what other folks think!

*** UPDATE Dan loves this. Said that he couldn't eat more than one piece, but also noted that he'd be happy to polish off the rest of the cake by himself. :) Everyone's tastes are different, I suppose!
around 12:01 AM
categorically speaking: baking, cake, coffee, Daring Baker's Challenge

sorry you didn't like the cake...at least you got a taker. and I did the same thing with the cocoa but i plated it quite differently.

Wow--did you veganize this one? It has a ton of eggs in it! If you did, how did you do it?!

Sorry you didn't like it, but it does LOOK impressive!

I agree, that was a lot of cake. I only had one bite, but everyone I gave it away to loved it. Yours turned out very nice!