Last week was a "Brooklyn Pad Thai" (with broccoli) week: 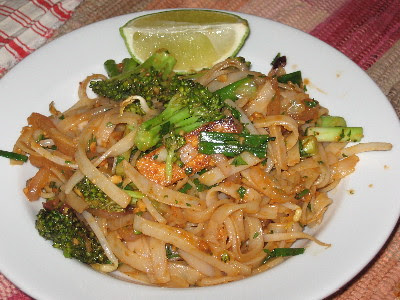 I know that Isa says that her recipe in Vegan with a Vengeance makes four servings . . . but we get between six and eight servings from one recipe. Whew! (Who can eat that much food in one sitting?) I'm really not complaining, though, because I loves me some delicious pad thai. And this past week, I streamlined the whole process by prepping all of the ingredients, including the sauce, on the weekend, so when it came time to eat, all I had to do was heat a pan and dump pre-measured bags/containers in. Woo! Convenience!

We also had this delicious meal, prepared by Dan: 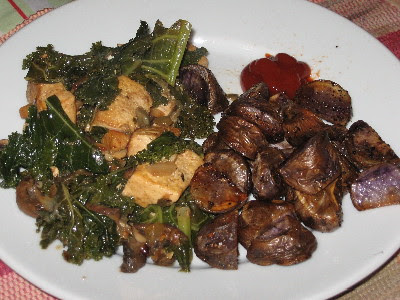 Dan fried up some tofu, added mushrooms, garlic, onion, kale, and a whole bunch of yummy stuff to make a "sauce," (including, but not limited to, mustard, balsamic vinegar, and capers,) and served roasted purple potatoes on the side. I did nothing to help with this meal, besides chop up the kale. (Dan said he was intimidated by the size of the bunch.) Delicious! Dan really should cook more often. :)

And, chili and cornbread is always a quick, delicious dinner: 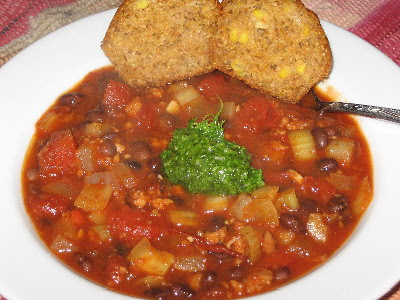 I edited Robin Robertson's recipe for "Black Bean Chili with Cilantro Pesto" by adding some TVP, a canned chipotle pepper in adobo, and four Thai chiles, minced, and threw the lot in my Crock Pot and cooked the chili on high for four hours. Spicy, spicy chili! My tummy may hate my later, but this was FANTASTIC. The cilantro pesto really makes this dish! Corn muffins are extra-dark because I used buckwheat honey to sweeten them, but I love the dark muffin with the golden-yellow kernels of corn poking through. Plenty of leftovers for lunches this week, too!
around 7:44 PM
categorically speaking: baking, broccoli, chili, cornbread, kale, muffins, mushrooms, potatoes, Thai, tofu

The pad Thai looks great! I can't wait to try that recipe.

lol, I feel I get about three servings from the pad thai recipe. I'm a serious pad tai addict!