I made it! Moved officially yesterday, and I'm in the new place! Wahoo!

I MOVED IN THREE HOURS! Holy cow, that was amazing. A few things helped:

1. Friends. Ann, Tiffany, Christine, Courtney, Dora, and Dan, to be exact! With seven of us and four cars (one small SUV,) we were flying up and down those stairs! Shout out to ALL of my awesome friends who helped me yesterday!

2. Furniture (or lack thereof.) I replaced almost all of my furniture in this move, (explanation at a later date,) so we had very little big stuff to lug around. Only a few important pieces came with me, and I had all of the new stuff delivered and assembled already, so that was super-slick.

3. Forethought. I worked my behind off, being prepared for this move -- I was totally, completely, 100%-ly packed and ready to go a full half-hour before my friends and their vehicles showed up. (Don't you just hate it when you help someone move and they are so NOT packed when you are ready to start helping? Frustrating.)

So, since the move finished by 1:00 yesterday, (and we were done with lunch by 2:00,) the unpacking is moving along nicely. I am almost completely unpacked, except for the kitchen -- take a look! 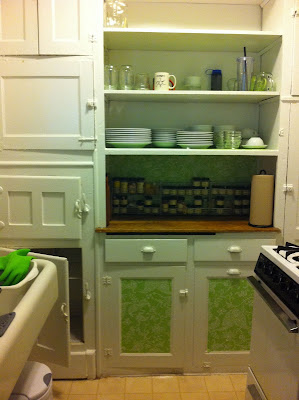 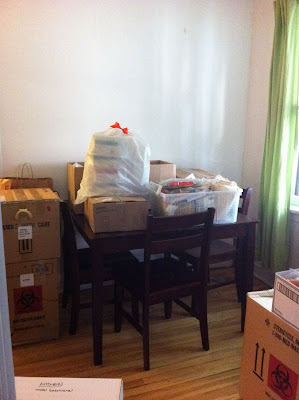 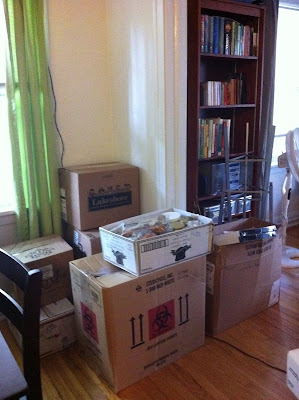 I have been dreading moving for SO long, and now that it's over, I am so happy to have moved! I really had outgrown my old place, and I still can't believe Dan and I lived there for a year and a half and didn't kill each other :) -- it was WAY too small to be useable for two people! I am so happy to have a few new things, plenty of room to spread out, and a little visual "breathing room" -- my last place was so jam-packed with furniture and stuff, every inch seemed to be covered at times. I'm enjoying that there is a little empty wall space, empty floor space, and empty storage space here! Whew!

The kitchen looks great so far--I love the spices in that space! Huge shout out to you for being so organized and packed and prepared for us to help yesterday...I swear that made a world of difference. Good luck with the rest of your unpacking and "settling in"...I love that part :-)

I love the green in the kitchen. Such a fresh color.

I love making a space 'mine.' It's overwhelming, but so exciting too. Good luck!