After a busy weekend in the kitchen baking cookies, I had assumed the last thing I wanted to do was mess things up again by making a huge meal . . . but I was wrong. :) I decided I was due a healthy, slightly indulgent, comforting bowl of delicious food for dinner! I had picked up the ingredients for "Mushroom Potato Stroganoff" from The Cheese Factory Restaurant -- and I roasted up nearly two pounds of brussels sprouts on the side. (Every once in a while I get to tag along to Costco with my friend Courtney, and massive amounts of produce always result! Woo!) I decided to mound everything into one of my giant Asian soup bowls and curl up on the couch with a movie: 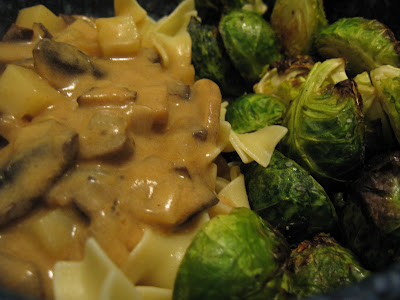 I also grabbed the hugest box of spinach and a giant block of feta when trolling Costco . . . and I have a box of filo in my freezer. Spinach pie, anyone???? :)
around 6:02 AM
categorically speaking: Brussels sprouts, mushrooms, pasta, potatoes

Mushroom stroganoff! Yay! I need to make some of this in the near future.