food, and a hiatus

First, in no particular order, here are some things I cooked or baked this weekend: 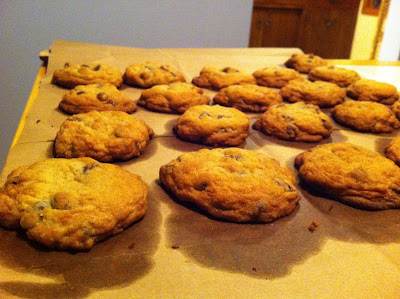 John had a potential tenant coming over on Saturday evening to look at a room he's renting out, and thought it would be good if the house smelled good. I suggested we bake something; after a quick trip to Target for flour, sugar, chocolate chips, and measuring cups, we made cookies! They were delicious, and the potential tenant took the room! Win win for all!

After John ate four cookies, we decided it was about time we made dinner, before cookies became dinner: 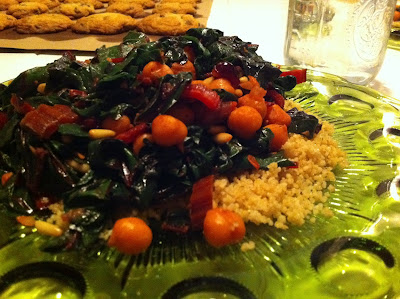 Swiss Chard with Chickpeas and Couscous is speedy, healthy, and almost always a hit. We used dried cranberries instead of raisins, (per John's request, as he's opposed to raisins almost always,) and I always reduce the amount of salt called for in the original recipe. Another hit!

Thursday night was a simple pasta and salad: 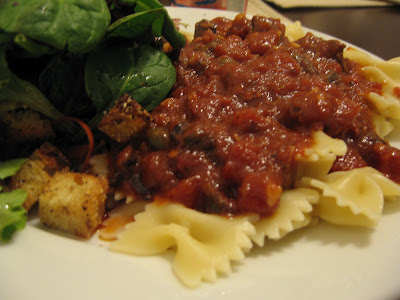 Homemade puttanesca sauce, sans anchovies, over bowties, with a "clean out the crisper" salad on the side. I even managed to use up some stale bread and made croutons! Delicious. 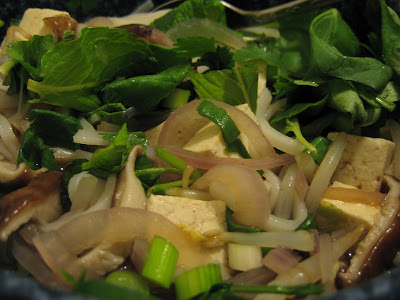 Persuaded by a coupon, I decided to try Pacific Food's Vegetarian Pho Soup Base to make life a little easier this week. :) The boxed broth definitely made the whole homemade pho process speedier, and the broth is actually pretty delicious! My only complaint is that the broth is pretty high in sodium, and doesn't actually taste all that salty. John and I each added a few dashes of soy sauce to our bowls after our first couple of bites; processed food is always higher in sodium than homemade, and I guess that's a "hit" I'm willing to take in the future for speed and ease of meal preparation, at least in this case! What do you think? Have you tried any of the pho broths yet?

And now, it's time for a hiatus. Work is EXPLODING right now, and to top it all off, I'm taking an online class, which starts today! Really, really bad timing given how late I've been working these past couple of weeks, but I'm certain the class will be really good and I'll learn a lot. It's going to be weird . . . I haven't had reading assignments, lectures, and homework for YEARS! (Flashback!) Wish me luck staying on top of everything, and I'll be back when things slow down.
around 6:24 PM
categorically speaking: baking, chard, chickpeas, chocolate, cookies, couscous, pasta, pho, soup, Vietnamese

NomNomNom...COOKIES! No to the hiatus please. :)

As usual, everything looks tasty, especially that Pho! Boo on your taking a hiatus, but in all reality, I do understand and think it is awesome you are going back to school.