happy birthday to me!

It was a short week, with little cooking, I guess!  Perhaps we have been eating out too much lately?  :)

(I suppose that's not entirely a bad thing?) 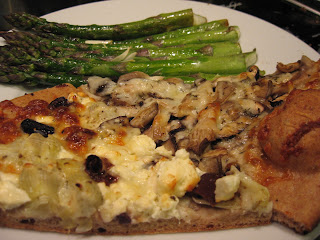 The front pizza is topped with olive oil, mozzarella, feta, artichokes, kalamata olives, and dried tomatoes; the back pizza is topped with caramelized onions, asiago, mozzarella, and three different kinds of mushrooms!  The mushroom pizza was definitely the hit -- I give credit to the caramelized onions.  They add an amazingness to meals, don't they? 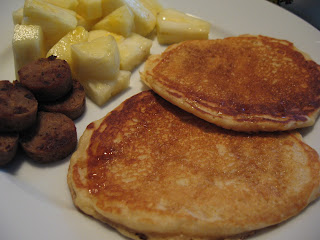 I made buttermilk pancakes with half whole-wheat pastry flour, half chickpea flour.  Delicious, albeit a little "beany," (they benefited from a little extra syrup, is all.)  I need to figure out my buttermilk to flour ratio a little more, as my buttermilk pancakes tend to spread too much and be a little too tender (i.e. nearly impossible to flip in one piece.)  Ah, pancakes just aren't my specialty, I guess!  I'll stick to waffles. 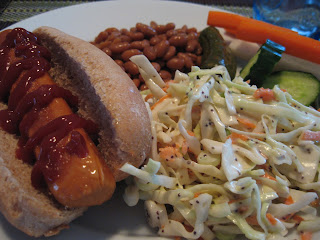 Yes, we had veggie dogs, coleslaw, baked beans, and veggies for my birthday dinner!  We were supposed to go camping this weekend, (hence, the veggie dogs,) but then with the nearly constant threat of severe thunderstorms, we decided to postpone.  Veggie dogs don't taste quite as good at home, but were still pretty tasty.  I used Liz's coleslaw dressing recipe, adding pepper and poppyseeds, and tossing it with shredded cabbage, carrot, and sliced green onions.  John doesn't like coleslaw!  Oh well. More for me.  :)

I've enjoyed having the last two days off from work for "birthday fun" -- and we'll keep it up through the weekend!
around 7:58 AM
categorically speaking: asparagus, cabbage, cheese, faux meat, pancakes, pizza
Location: Saint Paul, MN, USA

Happy Birthday again, Catherine! You never did tell me what you ended up doing on your birthday...you will have to send me an e-mail :-) I hope you are having a good weekend!

Happy Birthday! I've been celebrating my birthday this week too :)

HAPPY BIRTHDAY!!
Your pancakes look absolutely fine to me. As does your birthday dinner. YUM!