When I got home from work tonight, I was feeling especially hungry, although I managed to put down quite a bit of sushi (avocado rolls -- YUM) for dinner earlier, and some steamed edamame as well. I decided to bake some muffins, since I had been wanting quick breakfast/snack type bread goods for a few days now. I didn't feel like making blueberry muffins, so I decided to make cinnamon-peach muffins. I also didn't feel like chopping the frozen peaches, so I just shoved a couple slices into each muffin, Vicki-style. (Not too long ago, Vicki made a peach-cobbler style muffin, using this "shoving in" technique.) The muffins are rather tasty, (I've eaten two already,) and look kind of cool. The only drawback was that the tips of some of the peach sections burned a little bit in the oven. I snipped the burned ends off with a scissors. High-tech operation in my kitchen, let me tell you!

On to the bike:

Recently, I acquired a new bike. (My old one disappeared -- stolen or supposed abandoned, I don't know -- it had no seat and two flat tires, so I can't imagine the thief got all that far with it!) A church choir colleague of mine has been generous enough to lend me one of her two bikes. I now have a fabulous Bridgestone XO-5 on long-term loan. Wowza: This bike is a hybrid, which means it's more stable than a traditional road bike, and I could put larger tires on it if I wanted to do mountain biking, but it is lighter and faster than a traditional mountain bike. (It weighs roughly 30 pounds, and I can easily carry it up and down two flights of stairs in my apartment building.) I'm one lucky girl, here! Biking to work (and home) is faster than taking the bus, which is awesome. Plus, I just really missed biking!

I am in the middle of two books right now, both of which are nonfiction, which is unusual for me, both about history and politics, which is also unusual for me, but both (at least in part) about food, food production, and food distribution. 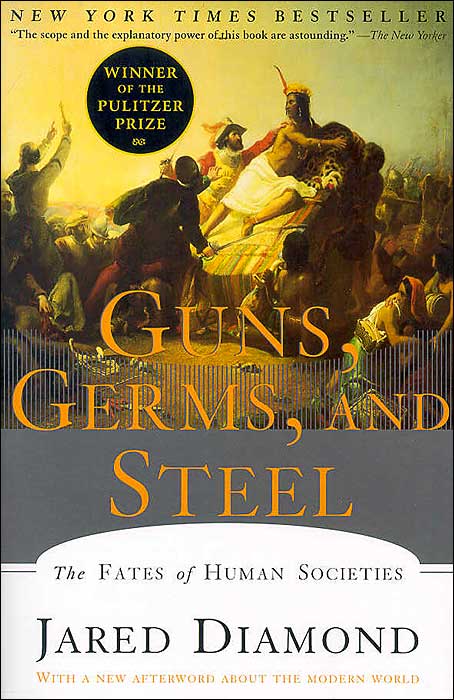 This book is essentially a short (440 page) history of the development of human society, from the big bang forward, with the focus on why certain societies/cultures have thrived/dominated the world, and others have struggled, some almost to elimination. The author argues that the most successful societies have been the ones that have had access to farming, guns, germs, and steel, while societies who remained hunter-gatherers and were less technologically-advanced have been the ones that have struggled. I am finding the chapters on the development of food production especially fascinating. I'll let you know if the later stuff holds my interest, but for now, this is a great book, and not nearly as thick and boring as it looks. It is rather well-written and engaging -- the author explains lots of theory, but also uses very clear, interesting examples to explain his point. 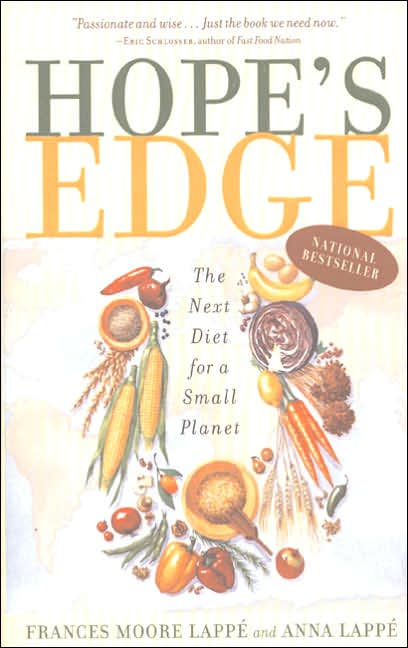 Now, I have not read Diet for a Small Planet, (I should,) but this book is essentially an updated, "part 2" type book. Frances Moore Lappe and her daughter, Anna, travelled the world in search of organizations that are fighting hunger by returning to local, organic, sustainable methods of farming. I have read so far about a school district in California that has implemented an on-school-grounds garden programs for all the schools in its district, a prisoner-rehabilitation garden that offers jobs to people just out of prison, in order to help them reconnect with the land and their communities, the MST in Brazil, which is organizing landless people in reclaiming and farming much of the land that is laying in waste by rich landowners, a community in Brazil that considers access to healthy food a basic human right, thus providing healthy, low-cost meals for anyone who wants them, the Grameen Bank in Bangladesh, which provides "microcredit" (very small loans,) to women who pledge to uphold 16 principles, thus freeing them from dependence on moneylenders, allowing them to start small businesses which allow them to adequately feed their families, and slowly creating social change (i.e., equalizing men and women as citizens,) and I have just started the chapter on organizations in the US and India that are trying to fight corporate patenting of seeds and genetic information. I have to tell you, this book is absolutely fascinating -- I can't put it down. I am learning so much, and for the first time in a long time, I'm incredibly interested in politics. I knew I'd get there eventually, (Dan is an avid news junkie, and I think wishes sometimes I was too, so he could talk politics more in-depth with me,) and I'm starting to get hooked -- and fittingly, the avenue was through learning about food!

In the end, all of this baking and biking and books have made me feel lucky -- lucky that I have the resources for and access to healthy, mostly local, mostly organic food.

Read Hope's Edge, if you haven't already. (I promise to read Diet for a Small Planet, too!)
around 11:34 PM
categorically speaking: baking, biking, books, muffins

The muffins do look pretty cute, and what could be easier?

I am in need of a good book - I've been reading the same one for about 5 months now! Mind you, I do have a bookshelf full of contenders...

Your muffins are gorgeous! i love the little bit o'peach poppin' up atop. So cute. Vicki-style indeed!

That is a really nice bike. Wow. Enjoy that cycle!! And don't forget to wear a helmet...

Judy, what have you been reading?

Kleo, let me know what you think of Hope's Edge, when you get to it. (And I always wear a helmet . . . in fact, just like you, I harass others I know to wear theirs!)

It's so funny, when I was a child I only read fiction. Now as an adult, it is rare that I read fiction (probably 1 out of 10 books I read is fiction). Not that I don't like fiction. I just find so many interesting non-fiction books that I'm interested in. I went to the library yesterday and I came back with 3 cookbooks, 3 books on improving memory, 2 books on women's health, and 3 memoirs written by travelers/expats. Guns, germs, and steel sounds fascinating. I've been meanint to check out Hope's Edge as well. Those are going on my list for the next library pick up. Thanks for sharing.

Have fun riding your bike!

Guns germs and steel changed my life! And my husband's! And my brother's! It is the closest I know that anyone has come to encapsulating complex history into one neat and eye-opening book. Love it. I love non-fiction books so much, especially about politics, the politics of food, travelogues, and any combination of those 3.

Hey, that's some nice handy-work with the scissors! Thanks for the shout-out. Way to go on the bicycle - it's a beauty!