Recently, I described my weekend as an "eat-a-thon," as I tend to do most of my cooking over the weekends while John is around, and live off leftovers during the week.  This past weekend was no exception!

Our weekend started a little early this week, as I had some downtime between jobs.  I decided to plan a fun Thursday night dinner -- baked potato bar!  I ended up coming up with so many ideas for toppings, I had to split my potato in half and "theme" each one. 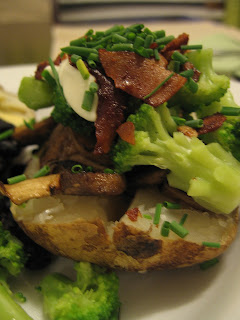 Following a bit of butter and salt, I piled on sauteed mushrooms, steamed frozen broccoli, homemade sour cream, Coconut Bacon, and minced garden chives.  A note on the coconut bacon . . . I really liked it, John didn't.  He doesn't care for coconut, so that makes sense.  :) 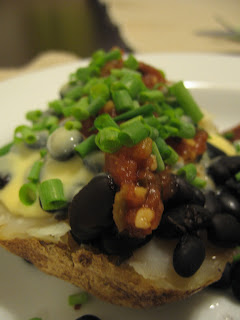 Plenty of seasoned black beans, Cheddar Cheese Sauce, salsa, and garden green onions.  I was really happy with how this batch of beans turned out, and that cheese sauce?  Awesome.  I think this was the first time that I've made a cheese sauce that hasn't broken!  Woo!  The trick?  Let the sauce cool a LOT longer than you think it needs to before whisking in the cheese.  We both loved this sauce -- it was light, creamy, cheesy, totally easy to make, and a budget-friendly way to stretch a small amount of cheese out into several servings.  I think I'll make this sauce again soon, and add it to some hot cooked macaroni for a healthier version of stovetop mac and cheese!

John had a long day working outdoors in the cold on Friday, so I figured he needed a pretty hearty meal at the end of the day: 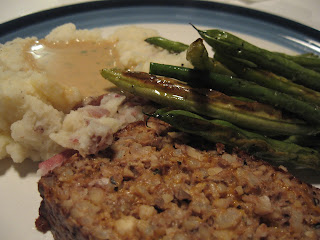 Nutloaf, homemade-buttermilk-garlic mashed potatoes, Quick Gravy, and oven-roasted green beans.  Nutloaf, while neither inexpensive nor terribly healthy, is terribly tasty.  :)  I recommend leftovers sliced, with ketchup, in-between two slices of good wholegrain bread.  We both really liked the gravy, too, (and it really was quick!) although I think I'd add an extra tsp of flour next time -- it was just a little too thin in my opinion. 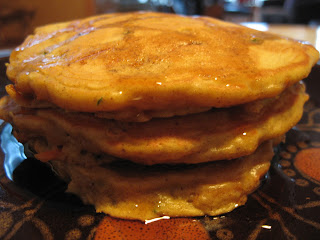 Who doesn't want to sneak in a serving of veggies at breakfast?  :)  I didn't have quite enough carrots this time 'round, so I ended up using about half shredded carrots and half shredded garden zucchini, with good results.  John was out of whole wheat flour, so I used all-purpose . . . and we both decided we preferred the hearty, nutty flavor of the whole-wheat flour in this recipe.  The AP pancakes were too sweet and too plain tasting, in our opinion! 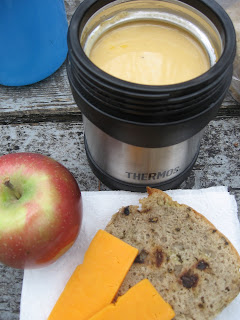 Homemade butternut squash soup, Kalamata Olive Bread with Oregano, sharp cheddar, and an apple.  The soup turned out really well, and I was excited to use some of the squash we grew in our garden this year!  I also really liked the olive bread -- it was dense without being heavy, savory but not too salty, and held up well during backpack transport.  (I also got to use some fresh oregano from our garden!) 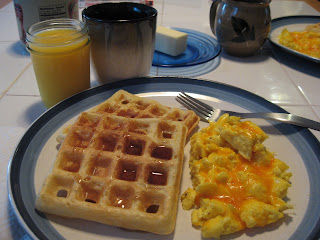 Cheesy scrambled eggs, Buttermilk Waffles, orange juice, and coffee.  Have I mentioned lately how much I love buttermilk?  Yeah?  Well . . . these waffles were another excellent use of my new favorite ingredient.  Crispy, light, slightly tangy, offset by a sweet drizzle of syrup.  Waffle perfection! 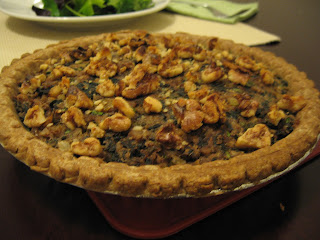 This was quite tasty, and very easy to make in advance -- I prepped the filling on Friday afternoon, stuck it in the fridge, and spooned it into the pie shell tonight before baking.  Superfast dinner in the oven!  However, I did make a couple of changes to the original recipe, including adding more oil and a couple of well-beaten eggs to the base.  My filling looked so dry after I mixed everything together, I wasn't convinced it was going to set up at all, and didn't want a crumbly mess on my hands!  Adding the eggs and extra oil gave the tart a beautiful structure, although it was no longer vegan.  Thoughts?  I might try this again using hummus as the base, adding some whole chickpeas for texture, and keeping the other veggies and seasonings basically the same.  Flavor-wise, this was fantastic, and surprisingly filling!

Nothing wrong with a good weekend of eating! In fact, there are plenty of things right with that... :) Waffles!!