Have you ever made plans with a friend, specifically, to get togther and bake? I never have . . . until this weekend! Courtney and I hung out on Saturday morning and worked together to try out two more recipes from The Joy of Vegan Baking -- lemon bars, and hearty spiced cocoa muffins. We had so much fun! Who knew cramming two people (and a very large, overly interested cat) 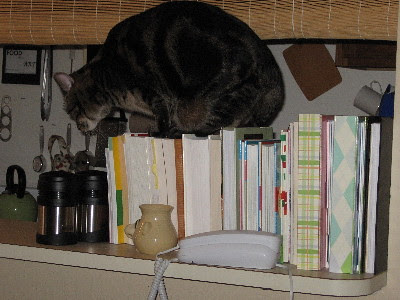 into the smallest kitchen imaginable could result in delicious treats!

First, we worked on the hearty spiced cocoa muffins. Courtney measured the dry ingredients, (including several spices -- yum!) while I whipped the egg replacer, added milk, and melted the Earth Balance. And then . . . a funny thing happened. When I poured the melted Earth Balance into the bowl with the other "wet" ingredients, it mysteriously re-solidified into a lumpy, almond-milky, buttery mess. Extremely strange. We weren't sure whether we could rescue the wet ingredients -- we assumed the cold milk caused the Earth Balance to firm back up, but we weren't sure. First we tried sticking the bowl in the preheated oven . . . no luck. Next, we tried putting the wet ingredients back into the microwave . . . much better results! After finally adding the dry ingredients, (and some walnuts and chocolate chips), we were in muffin business. Courtney, scooping muffins into her muffin pan (she brought hers along since I struggle so much with mine!) -- 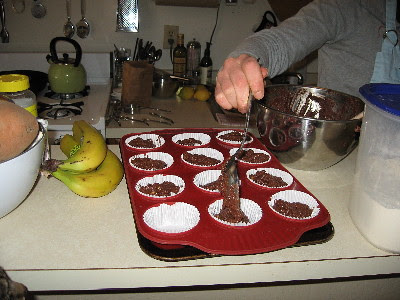 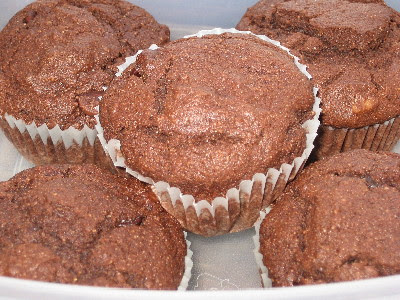 Yum! I sampled one warm yesterday, and another one that had been chilled, for breakfast this morning. These muffins are rich, deliciously spicy from cinnamon, cloves, and cayenne, chocolatey, sweet (but not overly so,) with enough structure to make you feel as though you've eaten something. I think the only change I would make for next time would be omitting the chocolate chips (I think the muffins are plenty chocolatey without them,) and adding additional walnuts, because they provide a wonderful crunch and flavor contrast to the overall muffin. YUM!

After the muffins came out of the oven, we worked on vegan lemon bars. Relatively easy to prepare, with a stellar finish! 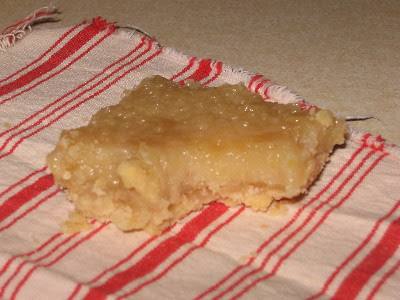 I do have a couple of changes I would make to this recipe for next time, however. First, the lemon flavor is VERY present -- almost overly present. The bars are more sweet-bitter, as opposed to sweet-sour. The original recipe called for the zest from TWO lemons, in an 8-inch pan of bars. I think I will cut down the zest to just one lemon's worth, next time. :) Also, the author did not suggest building the crust up the side of the pan, which I will DEFINITELY do next time. Why? Because shortbread shrinks a little as it cooks, which left gaps between the crust and the pan for the filling to seep down into, and then burn and glue the bars to the bottom of the pan. Grumbe, grumble, growl. I ended up losing a few lemon bars this time around, because the edges of the crust were positively glued to the pan -- I cut around the edges, lifted out the middle of the lemon bars, and used my chef's knife to cut them into squares on a cutting board. The pan and sticky, burned edges are still soaking in my sink. Now I know for next time!

ALSO, since I am becoming a baking queen, I may have to invest in a new square "bar pan." Lately, I have been dreaming of this removeable-bottom, 9-inch square pan that my former employer carries at the store . . . I may have to pop in and pay them a visit in the coming weeks!

What (tasty) fun we had! The next time we're getting together, we've already planned to make Courtney's recipe for carrot-spelt muffins, and a maple cake recipe from Cooking Light, which we plan to veganize. (Courtney gave up cane sugar for lent, so we need to use recipes that call for more natural, unrefined sweetners. She's taking her share of this week's treats to her coworkers -- bummer for Courtney, but bonus for them!)

I'm planning a trip to the asian grocery store this afternoon -- wahoo! I have only a couple of things on my list, but we'll see what else I end up hauling home. :) Until then!
around 8:02 AM
categorically speaking: bakeware, baking party, bars, muffins, vegan baking

Oh no--I am sorry to hear about the lemon bar problems! I feel bad...I greased the pan and spread out the dough for the crust. Apparently I didn't do such a great job there...
They do LOOK impressive at least!

Have fun at the Asian grocery store! I love going to them, and have not been in quite a while, so I may have to plan a trip myself soon!

How fun!! I love baking and/or cooking "dates"!

Courtney, don't blame yourself for the lemon bar retrieval problems! We followed the recipe as writ -- next time, we know better!

Julie, I know! I've never really had a baking "party" before, but it was so fun!

thanks for the tip in those bars.