Dan has been nursing a cold all weekend long. Phooey! Lucky for him I had planned on making vegetarian "chicken and dumplings" for dinner tonight! 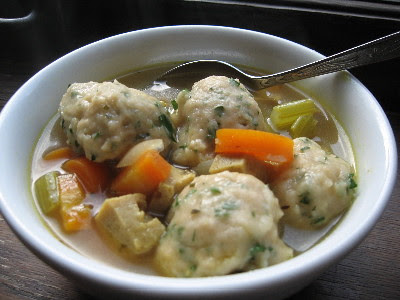 I followed this recipe, courtesy of Cooking Light, with a few modifications, as always: I doubled the recipe, used vegetable broth instead of chicken broth, used one recipe of chicken-style seitan (the recipe I have is from Vegan Vittles, I think,) instead of chicken, and used almond milk instead of dairy milk in the dumplings. So delicious! (And vegan!) I would use less seitan next time, but that's about the only change I would make. Oh -- and I'd definitely make MORE dumplings!! Those went first, of course. :)

I quartered the last of the beets and crumbled the rest of the goat cheese on our side salads. I figure, if I'm making a "get-better" dinner, there better be as many vitamins in there as humanly possible, right??
around 7:17 PM
categorically speaking: dumplings, faux meat, soup

I made a very similar soup recently. I am so in love with dumplings! Your soup makes me want more.

beets and goat cheese?! you're spoiling him haha :)

Bex, aren't dumplings the best?? I hardly ever make them, but they are SOOOO good. I have a Mexican-style soup that has masa dumplings in it . . . that might have to be next on the list!

Teddy, he is spoiled ROTTEN! But, he knows it, and is grateful. :)

Leng, the recipe I modified from is linked in the post -- hope that helps!