super-awesome treats, among other things! 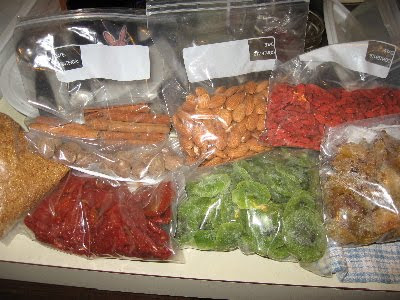 Clockwise from far left: golden flax seeds, stick cinnamon, whole nutmeg, organic almonds, dried goji berries, dried STARFRUIT, dried KIWI, and sun-dried tomatoes!!!!! Amazing! I think I'm going to use the kiwi and starfruit as decorations on cupcakes -- they are WAY too pretty to just gobble up! I was also super-excited about the goji berries, since I'd never tried them before!

I've cooked a little bit this weekend, -- here's what we've been eating: 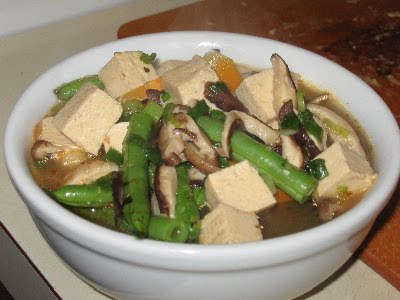 This is salty, noodley, comfort food at its best! Please note if you click through to the recipe . . . the first time I made this, I followed the recipe as written, and it was so salty for me, I couldn't eat it. I've cut the low-sodium soy sauce down to 1/3 cup, and that seems to suit my palate better. Also, I always add a block of cubed extra-firm tofu, for added protein and "staying power." I had two bowls of this soup for dinner on Friday night, Dan had three bowls. Yum! Dan woke up this morning and declared sleepily, "I feel like something sweet." Now, Dan never, ever, EVER makes food requests -- I ask him over and over for meal ideas, and he just says, "whatever. Pasta. Beans and rice." I was SHOCKED that he said he was hungry for something! I asked him, "what kind of something sweet did you have in mind?" And he replied, "pancakes!" Wow. I didn't even think he liked pancakes that much! Since pancakes take less than five minutes to make, (not including cooking time,) I was HAPPY to oblige this request. I asked Dan if he would like blackberries in his pancakes, since we had some in the freezer from this summer, and he replied, "that would be INSANE." So, blackberry pancakes it was. Dan had SIX for breakfast, and I ate the last three of the batch later in the afternoon for a snack. Ha! Leftovers, shmeftovers. 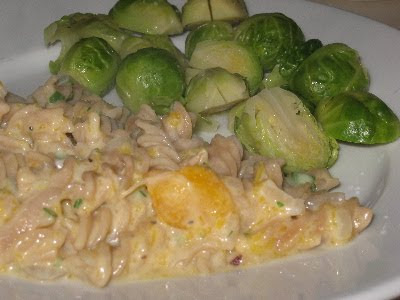 Hello, cheesy, creamy, pasta goodness. I made Fettuccine with Butternut and Gorgonzola Sauce, from Cooking Light, except I used spiral pasta because I couldn't find whole-wheat fettuccine at the co-op this week. Although this dish used, I swear, every pot and pan I own, it didn't actually take that long to prepare, and was definitely worth the extra scrubbing. Creamy, slightly sweet, slightly tangy sauce, full of squash and onions, smothering whole-wheat spirals made for a VERY comforting dinner. I kept the side simple -- plain steamed brussels sprouts fit the bill.

Almost forgot about dessert! How can that be? 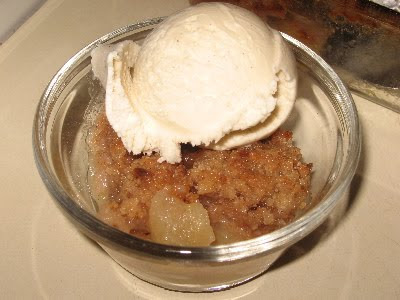 Apple crisp, with a scoop of vanilla ice cream. I love, love, love the apple crisp recipe in Joy of Cooking, which is weird, because I hardly ever cook out of that cookbook! Joy gets used mostly as a tofu weight in my house. :) However, applying that recipe to some of the apples we picked yesterday made a very satisfying dessert.

In addition to making the meals pictured above, I also made granola, 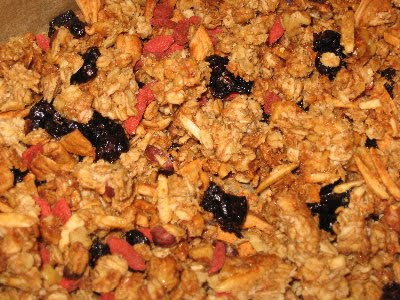 (using some of the goji berries Courtney gave us!), a pumpkin cake with cream cheese frosting (which we haven't cut into yet, so you'll see it later this week,) washed and chopped a huge bunch of kale, made a batch of almond milk, and roasted up an eggplant and quickly pureed it into some tasty baba ganoush. (Am I spelling that correctly? Probably not. Oh well.) Yay for being prepared for the week!
around 8:55 PM
categorically speaking: apples, baking, blackberries, Brussels sprouts, cheese, granola, pancakes, pasta, squash, tofu

Wow! All those treats from Courtney look awesome! That pasta dish sounds very delicious and I have 3 huge butternut squashes from my father-in-law that I need to use!