Why is it that just about everything I make is fiber-loaded?

I suppose it's that whole commitment to whole grains, plant proteins, and lots of fruits and vegetables. Well.

Anyhow, on to the food!

Here is a very belated photo of the lentils and rice I made last week, with some frozen broccoli mixed in. This was surprisingly tasty and satisfying! 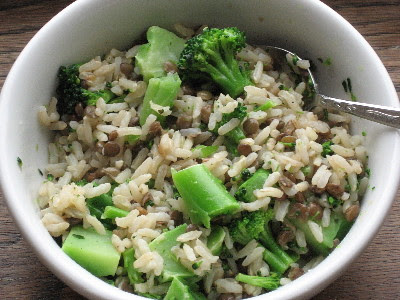 Last night, Dan and I completed our first joint cooking experience and made the vegetable curry that is in the May/June 2007 issue of Cook's Illustrated. I have mixed feelings in general about Cook's Illustrated, (mixed enough feelings to allow my subscription to lapse,) and have had mixed results with their recipes. This curry was a LOT of work, and yielded, in my opinion, mediocre results. I felt the finished product needed considerably more salt than the recipe called for, (but I did use unsalted diced tomatoes, which could have been the problem,) and in general, I thought the curry was "just okay." Curries, like soups, are always better the next day, though, so I'll update once one of us eats the leftovers. Anyhow, here's Cook's Illustrated's Vegetable Curry served with Onion Relish and a big dollop of whole milk yogurt: 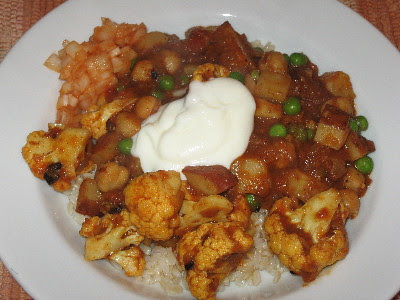 I recently purchased a big bag of Bob's Red Mill White Whole Wheat Flour, and gave it a test-drive this week in some blueberry-lemon muffins. I am especially excited to try this flour in no-knead bread, (I'm thinking about making a loaf that is entirely white whole wheat flour, because of its higher protein content,) and was curious how a higher protein wholegrain flour would perform in baked goods. The blueberry muffins do have a somewhat more "bready" texture, as opposed to the typically cakelike texture of most muffins. However, I love them! My only complaint is that they aren't lemony enough -- I used the zest and juice of one lemon for 12 muffins, and I may need to use two lemons next time. :) These are quickly disappearing around here: 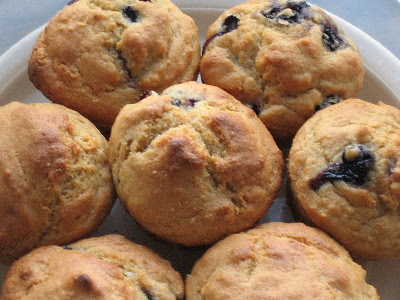 Last but not least, I made another batch of chai this morning. I have been experimenting with the amount of different types of spices and also the amount of sweetner in this recipe, and I think I may have gotten it "just right" this time . . . unfortunately, I didn't take notes, so I may not be able to replicate this! Alas. I'll just have to enjoy it now, and experiment again another time. 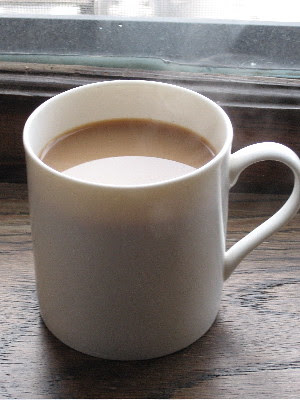 Back to working on the cookbook! (Editing has been going smoothly, and I have several more recipes to add, and many more recipes to test! I'll post when I'm ready for testing helpers!)
around 11:27 AM
categorically speaking: baking, chai, curry, lentils, muffins

I LOVE lentils and rice. The addition of broccoli makes it seem even better (and more fiberlicious!) Sometimes I also put caramelized onions and/or raisins (!) on my lentils & rice. I'm sorry your curry didn't turn out too well. I don't even know what Cook's Illustrated is! Mmmm, and I could go for some chai right now. Don't you hate having to write down everything you cook- proportions, amounts, etc.?

I just made the chai cupcakes from Vegan Cupcakes Take Over the World, and I am now in the mood for chai! Your post convinced me to make some of my own, which I have never done before.

I am glad to hear the cookbook is going well--and I am excited to test some more recipes!!

Bazu, I wasn't sure at first what I'd think of lentils and rice, but I love them! Almost more than beans and rice. Mmmm fiberriffic. Cook's Illustrated is the magazine published by the people who do America's Test Kitchen (that cooking show on PBS.) Many people consider Cook's to be the supreme authority on all things culinary . . . I tend to disagree at times. And yes, I do find having to take notes while cooking a bit frustrating!

Courtney, your cupcakes sound delicious! Email me if you want my chai recipe -- it's pretty easy. (P.S. I'm working tomorrow night if you want to stop by and say "hi!")

i <3 fiber, and i love all the stuff that you made! The muffins are the greatest! Lemony blueberry goodneess. I'm also partial to the lentils & rice & broccoli. I totally agree about curries... i'm not the biggest fan of them but they are almost always better a day later..

The bowl of rice & lentils looks soooo good! So do the muffins and the curry looks incredible. Too bad it didn't live up to your expectations.

I tried making the no knead bread with the Bob's White Whole Wheat Flour and it didn't turn out at all. Very dense and no rise. When I get some more time I'm going to try to make it with 50/50 white whole wheat and all purpose and then try to increase/decrease the white whole wheat amount until I get it right. If you succeed, let me know.