stocking up (the freezer, too!)

My friend Ann and I usually go for a walk on Thursday nights, and after our walk last night, she was kind enough to drive me to the co-op! I had a huge number of staples/stock-up things I needed to pick up, and it just wasn't going to happen if I had to carry it all home on the bus. See? 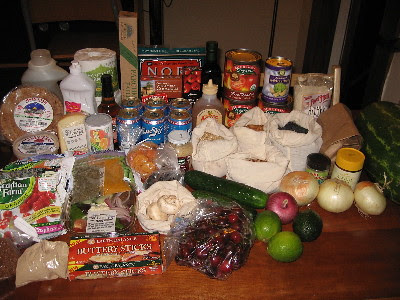 DELI:
locally-made greek salad with balsamic vinaigrette (I hadn't had dinner yet -- and it was great!)

AND, even after all the walking, shopping, and putting-away of groceries, I managed to squeeze out a couple of cooking projects last night, too! 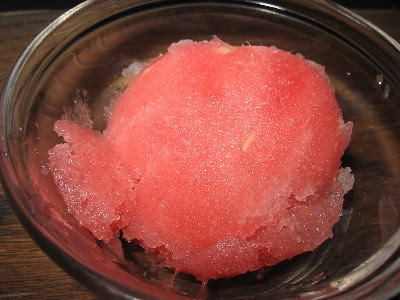 Holy Moly, this is amazing! I pretty much followed the recipe as writ, except doubled it, and used agave (1/4 cup for a double-recipe) instead of the called-for sugar. (Why? I'm actually low on sugar. Don't you hate it when you get back from the store and realize you've forgotten or overlooked a major staple? Grumble.) Anyhow, I can't even begin to tell you how much I've grown to love my ice cream maker this summer! Sigh.

While the base for the sorbet was chilling, I started one more recipe, too! 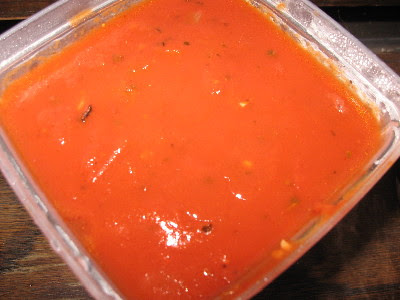 This recipe I, again, followed as writ, except subbed fire-roasted crushed tomatoes for the regular crushed tomatoes called for in the recipe. I was seriously considering buying jarred pasta sauce yesterday . . . but stuck to my "Five or Less" guns and decided to buy the ingredients to make my own instead! I've made this recipe before, and it's quite delicious. Nicely spiced with a hint of fennel and traditional Italian herbs, basic enough to be used in a variety of recipes, but still having its own personality atop hot, cooked pasta. Since this recipe yields twelve cups, I kept three cups in the fridge for use soon, and froze three additional three-cup portions.

Pizza and sushi planned for this weekend, plus a trip to the Farmer's Market tomorrow morning!!! What will I find??? I can't wait!
around 7:23 AM
categorically speaking: grocery shopping, marinara, sorbet, watermelon

WOWSA! That IS a lot of groceries, you would have to have ample trunk space to get that load home. I'm stoked to see what you cook up with all this goodness.

(Oh, and by the way, apparently there has been some confusion on my blog. Both myself and my partner Brett post on the Veg*n Cooking blog, so to know who wrote what, you'll have to look at who posted it. Brett wrote a piece about "less is less", and I got an email from someone discussing it, who had thought it was me who wrote it! I liked it though and your commentary was some good stuff to chew on as well.)

*are you on purpose shortening the word "written" to "writ"? It's like blog shorthand, huh? That seriously cracks me up!

I love the color of your marinara! Good luck at the farmer's market tomorrow too!

Wow--you did stock up! Oh my goodness...cherries! YUM! I have been eying those at the co-op every time I have gone in there for the past month...mmmmmm....

Man am I jealous of your ice cream maker :o) Especially today when it is disgusting out and humid and muggy and in the 90s. I hope you are enjoying some ice cold watermelon sorbet tonight and keeping cool!!