my weekend in food: a story 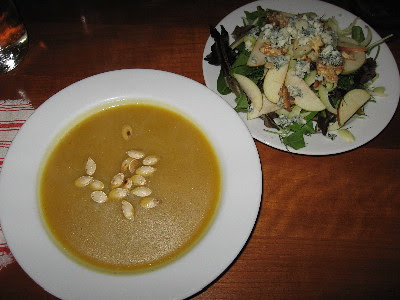 Vegan Creamy Pumpkin Soup:
Saute 1 cup onion, chopped, in 2 tablespoons nonhydrogenated margarine until the onion is soft. Add 1/4 tsp ground cinnamon, 1/8 tsp ground ginger, and 1/8 tsp ground black pepper and allow spices to toast for a few minutes. Add 3 1/2 cups vegetable broth, 2 cups pumpkin puree, and 1 tsp salt, and bring everything to a boil. Lower the heat and simmer the soup for 15 minutes. Puree soup with a stick blender, or in a regular blender in batches. Stir in 1 cup nondairy milk of your choice, and heat through.

Breakfast Saturday was simple enough -- peanut butter toast in a rush before I ran out the door for my shift at the store. I drank a Naked Juice smoothie during my shift, as usual. (They are a lifesaver!)

I met my friend Christine for lunch after work, and we headed over to Lucia's Bakery. I had a solo mushroom and onion pizza, some mixed roasted vegetables, and a pumpkin bar with cream cheese frosting. MMMMMMMM. Lucia's never disappoints! A wee bit pricy, but very much worth it. 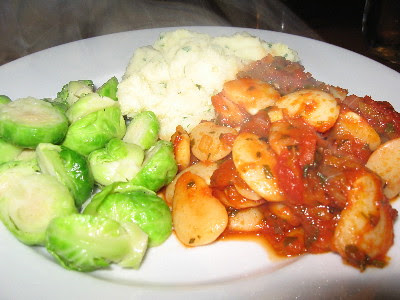 Dan and I worked together to prepare steamed brussels sprouts, garlic mashed potatoes, and Mediterranean-Style Baked Lima Beans, from VCON. I HAD to try this recipe, especially since my friend Courtney believes so strongly in it that she bought me a pound of lima beans with which to make it! And she's right . . . those are some DAMN tasty beans! 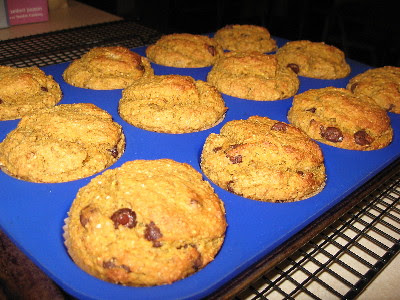 When I saw these on Diann's blog, I couldn't make them fast enough! I have always been intrigued by the combination of pumpkin and chocolate, but have found the texture of pumpkin chocolate chip cookies to be a little . . . off-putting? They always tasted like overly dry cake to me. (Blech.) Anyhow, I was so impatient to make these, in fact, that I couldn't wait until I had millet in the house to stay true to the recipe . . . I subbed a half-cup of Bob's Red Mill 10-grain hot cereal mix for the millet. They are FANTASTIC! Thanks for sharing your recipe, Diann!

There may have also been some "pull-n-peel" Twizzlers involved later Saturday night . . . Dan is a bad influence when it comes to candy! 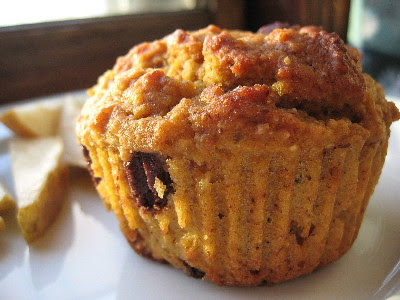 That's right . . . you get a close-up of one of those fantabulous pumpkin muffins, and they were just as delicious this morning as they were last night! Sliced local pear on the side. Not pictured: black coffee (of course.)

Mid-morning, Dan and I headed over to the Farmer's Market, to buy apples and a pumpkin: 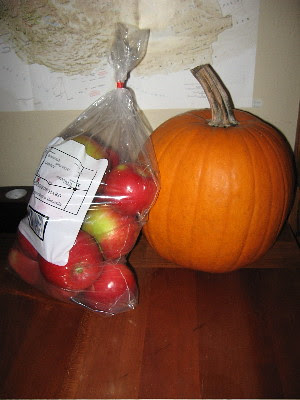 We bought a nice-sized Jack-o-Lantern for carving (and seed roasting!) for only three bucks, and a bag of "UMN 1622" apples -- the University of Minnesota is always working on something in the apple department!
These tomatoes also caught our eye: 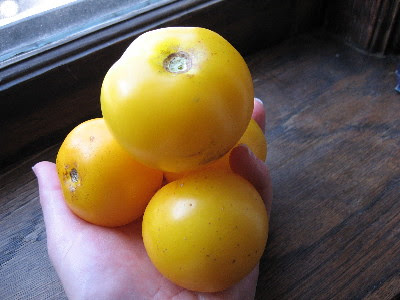 They are an heirloom called "sundrops." Aparently no acid, so they are super-sweet. We'll have to wait for them for a couple more days -- they don't smell ripe yet!

After the FM, I made brunch: 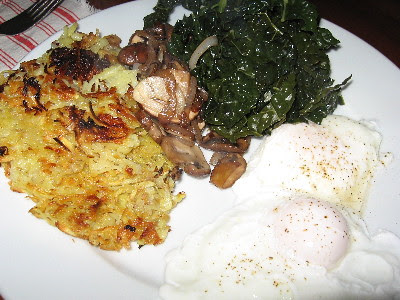 Same old, same old, but still delicious. Sauteed mushrooms added to the plates for a little change of pace.

Dan and I went to see the movie "W" this afternoon -- it was much better than I was expecting it to be, given the reviews. Bush, Bush, Bush . . . I realize this is a story told about him by someone else, but man . . . I shakes my head, I do!

We got out of the movie later than I had expected, so time for dinner was crunched short -- we ended up going out to a favorite local Mexican place, Salsa a la Salsa, even though I had originally planned on cooking. I ordered the vegetable tamales, which are smothered in a spicy green sauce, and accompanied by black beans and grilled veggies (on request -- typically, rice is the second side. But I love their veggies!) The service is always friendly, and tonight our server offered us a free sample of dessert! I was expecting a small sliver of cake to share, but no, she brought two nice-sized pieces of a limey cake/cheesecake layer treat, smothered in a deep red strawberry sauce. YUM! (She earned herself a very generous tip with the free dessert!) Ooohh -- I also had horchata.

Your weekend was miiiiighty tasty!! :0)

I am a huge fan of the broad beans in tomato sauce, it's a popular dish in Greece and I order it almost every night when I'm there.

You certainly did have a great weekend. The yellow tomatoes that I got in my CSA box are super sweet. I hope yours are good too. And I'm so glad you liked the muffins - yours turned out great!

I made the lima bean recipe from Vcon and I loved it! Nobody else really did, so I ate the whole thing by myself - took me a week!

All of the pumpkin food sounds amazing! I <3 pumpkin. Thanks for posting the soup recipe.

How do you make your hash browns? I don't think I've ever made hash browns before! gassssp

The beans in tomato sauce look so good to me right now. I think I am protein deficient. I love all your meals - and the muffin - oh my heavens! I am such a fool for muffins. I almost never have them either. I must get some tomorrow. Or maybe I can bake some.

Julie, it's taken me a LONG time to figure out hashbrowns. But they are pretty simple!

1. Preheat a cast-iron fry pan. Coat with a good amount of safflower oil when the pan is hot (but not scorching -- you don't want to burn your taters.)
2. Shred yukon gold potatoes. Squeeze out the starchy liquid.
3. Plop the potatoes in little cakes in the fry pan. Spread them out/squish them down so as much of the potato comes in contact with the pan as possible. Salt the uncooked side.
4. Watch 'em and flip when golden brown. Cook the second side, then transfer to a plate and dig in!

That soup looks and sounds wonderful - your whole weekend sounds yummy in fact! Thank you for the recipe for the soup as well as the hashbrown directions - mine always end up a icky burnt mess on my pan.