I checked The Supermarket Vegan out from the library a week or so ago, and have just gotten around to cooking from it a little bit this week. What a great little gem of a cookbook! All of the recipes seem simple and relatively quick to prepare, which is a plus in my house on busy weeknights! Too bad it's too late to let Santa know about this one! :) 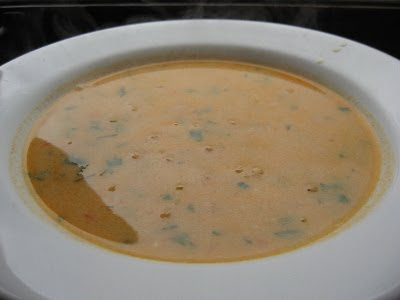 Now, I liked how EASY this recipe sounded, but I was wowwed by how tasty the finished product was! I ended up using about a teaspoon of harissa in the soup (instead of the suggested cayenne,) and finished the soup with some of the harissa-infused oil Anna and Langdon shared with us when we were in Milwaukee. MMMMMM! This was an incredibly satisfying lunch on my snow day yesterday, with a crisp green salad and some lightly toasted pita. Yum yum yum!

Next, we have Lentil Tacos: 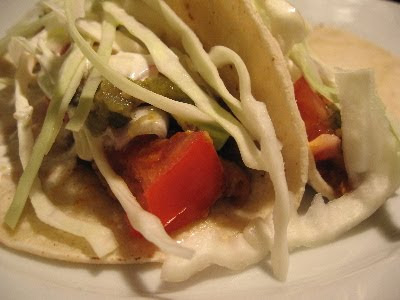 This was another winner with both Dan and I -- we agreed that neither of us really cares much for ordinary lentils, but we like this recipe! (I ended up adding the juice of one lime to the filling, to counteract the over-saltiness I tasted in the finished product -- it helped!) We spooned the fillng into corn tortillas and topped with diced red onion, chopped tomato, sliced avocado, sour cream, some of the salsa verde I made last weekend, and shredded cabbage.

Now, my only complaint about these two recipes is that both tasted over-salted to me, and I didn't even add any salt at all to the first recipe! I'm wondering if it's because I used commercial veggie broth base -- has anyone ever tried "Better than Boullion" before? I picked it up because it was both cheaper and yielded more than the Rapunzel brand, which I used to buy all the time. (I have been making my own veggie broth base for years now, but needed broth and didn't have time to make more base last weekend.) Maybe I'm so used to my own version, (which probably has less salt,) that my tastebuds are just overwhelmed? What do you think?
around 7:23 AM
categorically speaking: chickpeas, hummus, lentils, soup, tacos

Yeah, it probably has a lot more salt.. I've seen a pretty big variety in broths..

I LOVE hummus in soup. I have a recipe for a broccoli/quionoa hummus soup on my blog.. yum!