It's been a weekend of sickness.  I've been harboring a cold for a week or so now, (just as soon as my allergies wrapped up, I caught the cold the kids at work have had,) woke up with back pain on Friday, and also came down with a bit of a tummy bug on Saturday.  Boo!  While I'm on the mend today, John's getting worse, so we haven't been eating much this weekend.  Or doing much of anything, besides sitting on the couch.  (We went to the Redbox yesterday, and I had to take a nap afterwards, it's that kind of sick.)

Here are a couple of pictures from before the germs took hold . . . 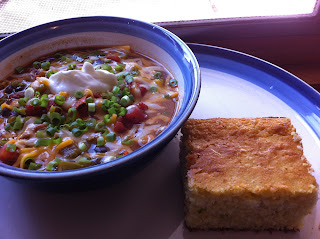 I made my plain/basic recipe, which is always a little bit different, but always contains onion, garlic, green peppers, minced mushrooms, beans, diced tomatoes, chili powder, cumin, and a little hot sauce.  This time, I also added a few spoonfulls of leftover refried beans and a few spoonfulls of leftover homemade salsa, in an effort to clean out the fridge.  :)  Topped with shredded cheese, green onions from the garden, and sour cream, this was a great, filling lunch.  Side of Buttermilk Cornbread (I cut the sugar in the original recipe down to 1/3 cup, by the way,) rounded things out nicely.

Since it's been chillier, I've been wanting oatmeal for breakfast lately.  I decided to switch things up and make baked oatmeal! 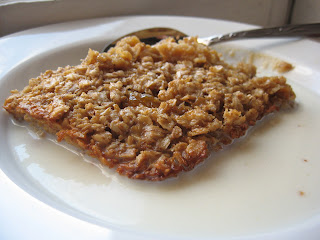 This is a relatively simple breakfast to make, and doesn't take too much prep time, although it does require about a half hour in the oven.  I'd consider making this the night before and popping the oatmeal in the oven just as soon as I wake up, or save slices to be reheated in the microwave as needed.  :)

Directions: Combine everything well and pour into a greased 9-inch baking dish.  Bake at 350 for about a half hour, or until the oatmeal is set and beginning to brown around the edges.  Serve with milk or a drizzle of cream!

OK . . . back to the couch.  I'll be back to work tomorrow, so I better rest up!
around 6:10 PM
categorically speaking: baking, black beans, chili, cornbread, oatmeal, pinto beans
Location: Minneapolis, MN, USA

I hope you feel better soon! Eat some more of that chili and it'll fix you right up. :)

Hope you are feeling better! I love eating Pho when I'm sick...not sure if restaurants typically have vegetarian broth options though...

Hope you are feeling better! Pho is my favorite when I'm feeling sick - not sure if any restaurants offer veg broth though...?