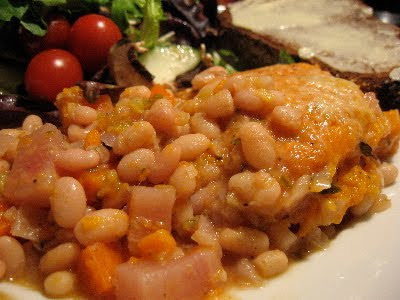 Sweet Potato Shepherd's Pie, from Vegetarian Times. This was . . . just okay. I have to confess that I probably wouldn't make this recipe again as is, but have thought about several changes that would maybe make it a ton better:

1. I was originally concerned by the amount of liquid in the recipe, and no thickener added. I did add 1/2 tsp cornstarch to the vegetable broth, which was clearly not enough. I would add at least 2 tsp next time, or reduce the amount of liquid called for. The version we ate last night was REALLY soupy, which meant the sweet potato topping didn't brown at all. Ugh!

2. I would reduce the quantity of beans called for to probably a cup, add some sliced mushrooms to the veggies, and some cubed seitan as well. (The filling just tasted sort of "flat" to me. Bland food doesn't fly in this house!)

3. I don't cook with wine, so I just added extra vegetable broth this time. I would probably add 1 tsp white wine vinegar to the liquid next time, too, to wake the gravy up a little bit!

I'm curious if you've ever made a shepherd's pie before, and how it turned out!
around 7:29 AM
categorically speaking: sweet potatoes, white beans

I actually made it just the other day. I made a post about it if you want to check it out. I love shepherd's pie but it is a wonkey beast and sometimes comes out runny. :) As long as it tastes good right?

I have never made it...but wanted to, thanks for the heads up!