I'm not going to get into the stuffing/dressing debate, because I grew up with wheat bread-based "stuffing," as opposed to cornbread-based "dressing." I guess I shouldn't judge "dressing" until I've tried it, but the idea of soggy cornbread . . . I'm just not sold that it's a good idea! Someone prove me wrong, maybe?

Anyhow, I've never cared much for stuffing -- although I did have a psychotic love of chicken-flavored "Stove Top" as a child. Stuffing tends to be one of those side dishes that sways one direction or the other -- mushy and gluey, or dry and tasteless. I also REALLY don't care for sage. So, let's just say, me and stuffing don't have the best track record, 'kay?

Well, courtesy of Real Simple, stuffing and I have made amends -- their recipe for Caramelized Onion and Herb Stuffing was, hands down, my second-favorite thing on my Thanksgiving plate this year! (Nothing can beat out the sweet potatoes!) 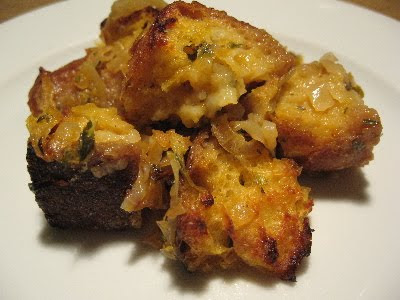 Other than the time it took to caramelize the onions, this side dish was a snap to prepare, (the day before!), with only a few ingredients, and NO SAGE! Bless you, Real Simple! (My vegan substitutions were as follows: veggie broth for the chicken broth, extra veggie broth whipped with EnerG for the eggs, and Earth Balance in place of the butter.) After careful thought over the recipe, I don't think I would EVER make this recipe using eggs, even though we do eat eggs on occasion -- I think the egginess would overpower the subtle flavors of the caramelized onions and fresh herbs. Stuffing still needs some kind of "thickener," though, so I would strongly encourage egg replacer in this one!

How do you feel about stuffing -- love it, or skip over it? What ingredients do you like in your stuffing?
around 2:00 PM
categorically speaking: stuffing, Thanksgiving, vegan mofo

I am with you...I have never liked stuffing. Soggy bread? I'll pass...
I am glad you have found a recipe you seem to like, though!

I never knew the difference between stuffing and dressing.

I never knew about the distinction between dressing and stuffing. I have always had the wheat bread kind, we don't really eat cornbread up here in Canada. I used to really love my dad's stuffing but since going veg I have not had it in years. I miss it sometimes. I've never tried making a veg version, and for some reason it doesn't appeal to me.... But maybe I will try this version and surprise myself. I might add some sage to it though :)

I love stuffing! I'm looking forward to making a version with smoked apple sage field roast sausages this Christmas...if I ever get my kitchen back!