My vacation is almost over!  I can't believe I've been away from work for an entire week, and it's already time to go back . . . I had a great week, though.  Saturday through Monday, John and I traveled to Wisconsin to visit my family, and we spent the rest of the week hanging out at his house.  (We even brought Oliver along -- and he did great!  He only hid in John's boxspring for the first day, and then spend the rest of the time trotting around, sniffing everything, and having "conversations" with John's roommate's cat through her closed bedroom door.  Ha!)  I did plenty of baking and cooking, we spent a day volunteering at the organic farm where John has been helping out this summer, spent plenty of time doing yard work, and made time for reading, watching movies, and relaxing.  :)

Of course, we did plenty of eating!  After a restaurant-marathon while visiting my family, we have been eating at home the rest of the week, trying to "recover."  Does anyone else feel just awful after eating out too many meals in a row?  I know I sure do.

We had lots of leftover beans, rice, and cheese, so ate plenty of Tex-Mex meals during the week: 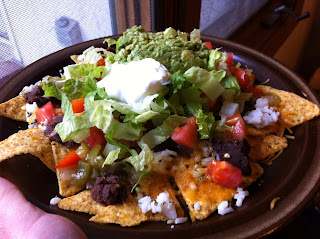 After we ran out of tortillas, we finished almost everything up  in nacho form.  :)  Refried beans, cilantro rice, cheese, homemade tomatillo salsa, garden tomatoes, lettuce, sour cream, and homemade guacamole.  MMMMMM.  Kind of want this plate for breakfast right now!

We had a surplus of kale this week, which is definitely a good thing!  We left the farm on Tuesday with a huge bunch, and also had a nice-sized harvest waiting for us in the garden.  After more "Magic Kale Salad" with tempeh, I made soup! 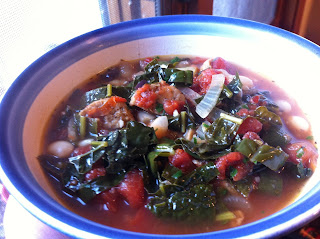 Kale, vegetarian sausages, onions, garlic, white beans, tomatoes, olives, broth, and seasonings made for a spicy-delicious soup!  I ended up with the hugest pot of this stuff, so we are still eating leftovers, and they are still just as tasty!

One of my kitchen projects this week was my first foray into cheese-making: 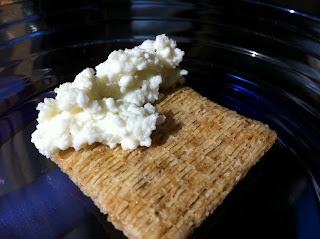 The last time I made butter, I used the leftover liquid to make "buttermilk cheese."  This is seriously the simplest thing ever -- you let the true buttermilk sit out at room temperature for 24 hours, and then heat it slowly until it begins to curdle.  Strain for 4 hours, salt, and enjoy!  I would describe this cheese as a somewhat creamier, less tangy ricotta -- I think it would work nicely in a lasagna, or on top of a pizza, or pureed with herbs, pepper, and lemon juice to make a dip for crackers or veggies.  It was pretty tasty just on crackers!