I seem to have a little, ahem, problem with the Farmer's Market . . . I tend to go twice in one weekend, buy a ton of stuff, and then wonder what to do with all of it! This past weekend was no exception.

Oliver wants you to see Dan's and my haul Saturday morning: 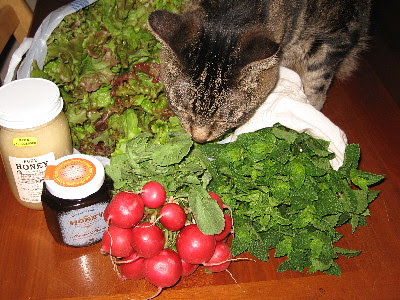 We were lured into purchasing not one, but TWO different kinds of honey -- I chose a jar of creamy, pale yellow pure raw honey, and Dan was drawn to a jar of thick, dark "Blue Earth Buckwheat" honey by Ames Farm. (Also raw.) I also picked up a beautiful bunch of radishes, a huge bunch of mint, and a gigantic bag of lettuce! After washing and roughly chopping all of the lettuce today, I am realizing I am in for a LOT of big salads this week. :) I've made big salads already for dinner Friday night and lunch Saturday, and am loving my veggies!

Dan and I also stopped at Shuang Hur and the Wedge after our errands Saturday afternoon, to pick up a few essentials for dinners this weekend: 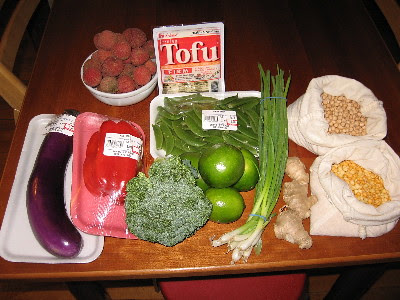 I love the Asian grocery stores for their prices and otherwise unknown to me ingredients, but I DON'T love that they package all of their produce on styrofoam trays, wrapped in plastic wrap! Sigh. Anyhow, we picked up Japanese eggplant, a red pepper, some snap peas, broccoli, limes, green onions, ginger, and tofu for our planned stir-fry dinner, and some lychees!! Lychees, if you've never had them, have the texture of a grape, and are very sweet with slightly coconutty, slightly floral, slightly melon-y flavors. Go buy lychees! Pictured on the right are bulk chickpeas and yellow split peas from the coop, to use later in the weekend. I learned my lesson with Hmong Family sweet soy sauce -- it is SWEET. This was good, but I wouldn't make it again this way -- I'd use regular tamari next time!

Courtney and I went to the Farmer's Market again this morning: 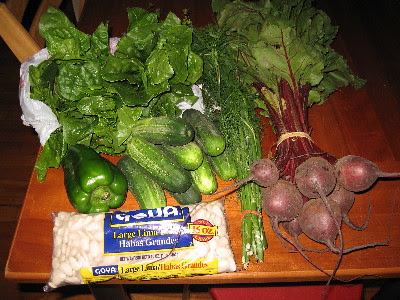 Courtney kindly gifted me a bag of large lima beans, strongly encouraging me to make the baked lima bean dish from VCON. (She's so subtle! Do you think she feels strongly about this recipe???) ;-) Thanks, Courtney! I purchased spinach, beets, dill, a green pepper, and just over a pound of large pickling cucumbers at the market.

I was pretty hungry when I got home, so I made a green smoothie snack/second breakfast: 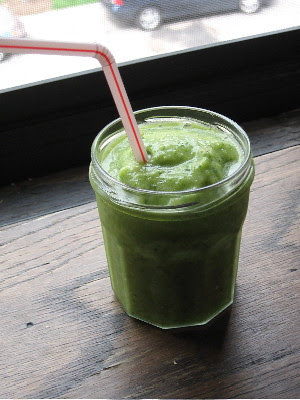 Pineapple, peaches, banana, spinach, a squirt of agave, and some orange juice. Dan enjoyed his own serving for breakfast, and was pleasantly surprised by the sweet, fruity, slightly grassy flavor. Dan doesn't eat as healthfully as he could during the week, so I'm happy to pack him full of vitamins over the weekends. :)

Give you two chances to guess what I made with the pickling cucumbers and dill . . . 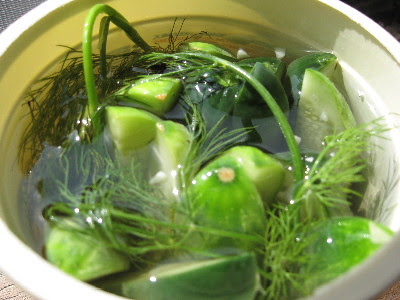 Yes, that's right, pickles! Shocker. I made up a recipe that didn't require any cooking, and that didn't use any sugar -- I like my pickles cold, crisp, salty, and vinegary, and that's about it. Garlic, dill, salt, and peppercorns went in with the cucumber spears, covered with equal parts white vinegar and water. Give 'em a week, and we'll see what I've created!

OH! Forgot to show you two frozen treats I made earlier this week. Pineapple-Coconut Popsicles: 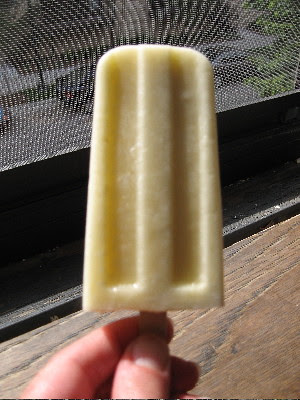 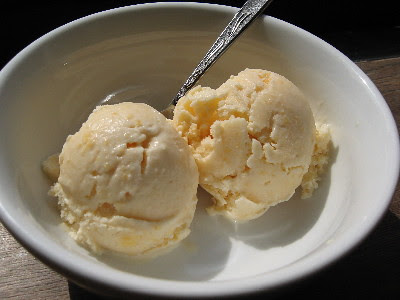 I used a basic ice cream recipe, lightening it up a little bit by using half and half instead of a mixture of heavy cream and whole milk, but made the mistake of choosing frozen peaches. I think I should have used fresh peaches instead, because this ice cream has NO peachy flavor whatsoever. It's still good, it just tastes like vanilla!

I decided to roast my beets this afternoon, and while I had the oven on I also made another batch of granola: 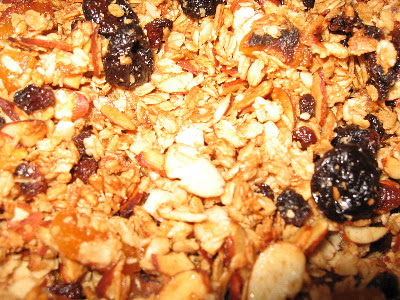 Dan's sister, Sarah, raved about my granola last weekend -- I should really email her the recipe!! 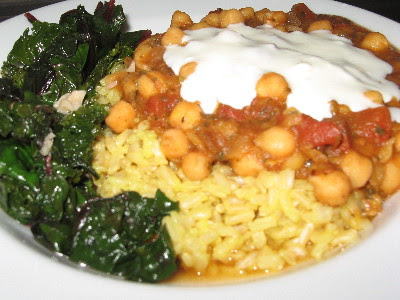 I used the jalapenos Dan grew in his garden and the mint I picked up at the Farmer's Market yesterday, along with a whole host of other ingredients, to make Paraati Chana from Madhur Jaffrey's World Vegetarian. This has to be one of my most favorite chickpea dishes EVER. (Plus, it's the closest thing I've made to authentic Indian food in my very own kitchen.) I served it atop brown rice flavored with a pinch of saffron, and a side of mixed greens -- kale from last week's trip to the market, and the beet greens from this week's trip.

I sent Dan home with the leftover dill and some of the mint, three lychees, leftover stir-fry, leftover greens, leftover paraati chana, and a jar of granola. As he was getting ready to leave tonight, I said out loud, "why is it that you always seem to leave with a goody bag?" He replied, "because I have a nice Jewish momma who takes good care of me." We both laughed -- I'm neither Jewish nor a momma, but I guess I do take pretty good care of him!
around 7:46 PM
categorically speaking: beets, broccoli, chickpeas, eggplant, ginger, granola, herbs, honey, ice cream, limes, lychees, onions, peas, peppers, pickles, popsicles, radishes, smoothie, spinach

Those popsicles look awesome. Enjoy the salads - got to love the farmers market.

Wow--look at all that FOOD! The pops are calling to me. I think I'm going to have to make them, too! :)

Your food looks so tasty! I'd make sorbet out of the pops recipe. But that's just because I'm not a big pop fan. ;D

Those popsicles look PERFECT. I want one now! I only wish I had a popsicle mold.

Wow--everything looks amazing! Your ice cream is beautiful, and vanilla is my absolute favorite flavor (and one I have missed since going vegan), so your peachy-vanilla flavor sounds good to me! I am sorry it wasn't very peachy, though.

Your pickles sound SO good, and I have to agree about Shuang Hur and their packaging. I don't buy their produce that is pre-packaged, just the stuff that is loose...I don't understand why they do that! I am excited to see what you use the yellow split peas for--I love yellow split peas!

Courtney, the yellow split peas went into the Paraati Chana -- they kind of fall apart and make a dal-like sauce. Mmmmmmmm.

LYCHEES!! Its so damn hard to find fresh, juicy lychees here in the states. When I lived in Brasil, I lived in a city that had a very large Japanese population, so their colony had a large lychee crop every year. I could probably pop 50-100 lychees in one sitting and barely realize it.