I had been planning on a mock chicken (i.e., seitan), noodle soup for one of our meals this past weekend, and never got around to it. I thought I'd make the soup tonight, but by the time I got home from work, seitan just wasn't sounding good to me for some reason! Lentil soup sounded MUCH better . . . so I stuck the seitan back in the freezer, dug out some lentils, and began experimenting. Results: 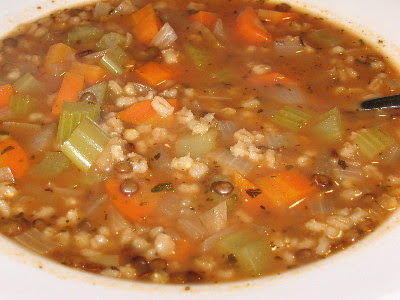 DIRECTIONS:
1. Bring at least 2 quarts of lightly salted water to a boil. Add the barley, and boil for about fifteen minutes, or until the barley is tender but still chewy. Drain and reserve the barley.
2. Heat the oil at medium heat in a 4-quart or larger soup pot. Add the onion, carrot, and celery, and cook about 5 minutes, or until the veggies begin to soften.
3. Add the remaining ingredients except for the barley, and bring the soup to a boil. Lower the heat, cover, and simmer 35 minutes.
4. Stir in the barley and simmer 10 more minutes. Serve with a slice of crusty bread.

This soup is good. Very good, to be precise! I forget how much I like barley. :)

I also made muffins tonight! I majorly modified this recipe of Diann's, to make Multigrain Banana Walnut Muffins! 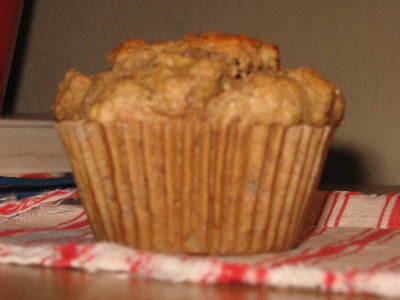 Verdict? This version of these muffins has AMAZING flavor . . . but the texture is a little gooey/gummy. My guess is the oat flour, since my waffles acted the same way over the weekend, and I used oat flour in them, too. Does anyone out there have much more experience than I using oat flour? Is this expected?

Oh my gosh! Everything looks amazing!
That muffin looks amazing too! I'm totally in for banana muffins - good substitution!

Your soup sounds terrific! I can't eat seitan, so I like your new version much better :)

Oh that soup looks so good... it's been ages since I've had barley. And these below-freezing temperatures seem to be begging for it...

Yes for some reason we haven't used barley for a while either, and it has wonderful flavour. I shall be getting some today and will try your soup (with adaptations to conform to my low-fat and low-salt preferences). Thanks a bunch - it looks delicious!!!

It doesn't seem like I've had that problem with oat flour, but I guess it is less absorbent of the wet ingredients than wheat or rice flours. I would try a smaller proportionate amount of oat flour next time. I have a recipe for banana muffins you might like to mess around with -
http://eatnvegn.blogspot.com/2007/09/tester-burgers-and-wheatfree-goodies.html

hehe, and here is a picture of someone typing on an ASUS 900, same size keyboard as mine. Mine is just prettier, haha. http://blogs.guardian.co.uk/technology/EEE901-7344-IMG3341s-thumb.jpg

You get used to it. Sometimes I find myself typing differently on my main one. But I adore it. Its so great to have.

I would have loved your soup (and the muffins) tonight. It suddenly got so cold here in Tampa!