Dan and I got up pretty early yesterday and did the grocery shopping, despite the snow, in an attempt to beat the Saturday crowds. It worked! We were in and out of two stores in an hour, and came home with the following: 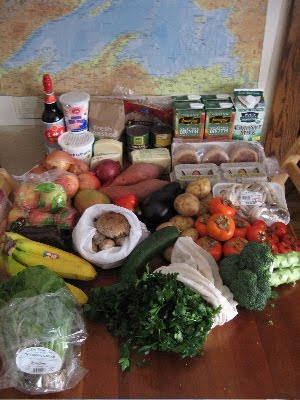 We picked up almost everything this week at the co-op, but did grab a few items at our local Asian market, Shuang Hur. (Those items are marked with a "SH" below.) Here's the list:

I was very happy with our budget-consciousness this week -- we managed to come in $35 under budget, and still pick up everything on our list! (Plus, Dan picked up a newspaper, which wasn't on the list.) Also, I was pleasantly surprised by the amount of our local purchases -- almost half of our spending! Given that it is already the dead of winter in MN, I think that's pretty good, if you ask me!

Now, on to the cooking!

Dinner last night was protein-packed, which was a good thing, since Dan and I ended up walking several miles in the cold to the movies! (Traffic was majorly backed up downtown, and essentially, we were walking faster than the bus. Tragedy!) Anyhow, we had plenty of fuel in our bellies during the journey: 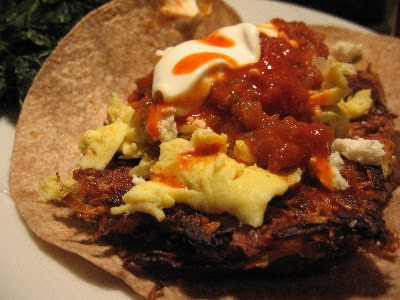 Dan's comment about this dinner -- "you really like breakfast burritos, don't you?" Heck YEAH! They are just as good for dinner, and especially fantastic with a side of kale, which we had last night. 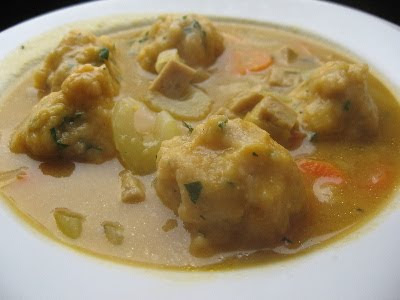 I've made seitan and dumplings many times in the past, but it's never turned out this monochromatic before! Sigh. At least it tasted good!

Dinner was much more visually appealing: 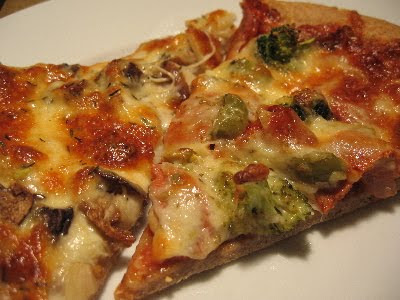 PIZZA! How we've missed you, pizza. Half whole-wheat Artisan Bread dough, topped with mozzarella and parmesan. The pie on the left also had caramelized onions, 4 kinds of mushrooms, (portabella, oyster, shiitake, and cremini,) tons of sliced garlic, dried thyme, black pepper, and a pinch of salt. The pie on the right had organic tomato sauce, red onion, green olives, roasted red peppers, broccoli, some Yves pepperoni, and dried oregano. Both were fantastic, but something about the phony pepperoni pie stole my heart this week! Mmmmmmmmm! (We did have a green salad on the side.)

Hope you all enjoyed your weekends! I put up a few Christmas decorations today, (not the tree, but a few other things,) and spent some time downtown with my friend Christine, window shopping and eating ice cream. :) It's beginning to feel a lot like Christmas!
around 8:01 PM
categorically speaking: budgeting, grocery shopping

Sounds like you had a good weekend! What movie did you see?

go you! I love how you support your local farms!

I really need to figure out a way to do it on a tight budget.

What do you make with persimmons?