Oh my, was that a long illness.  Just as soon as I started feeling better, John took a turn for the worse.  Consequently, I haven't been doing much cooking these past couple of weeks!  However, come Sunday, we both finally had appetites.  Hurry up, Catherine -- cook something! 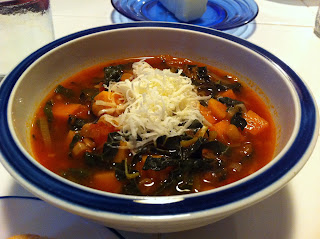 Is anyone else as obsessed with Real Simple's recipes as I am?  Winter Lentil Soup has made it onto my list of all-time favorite soups.  Check out this recipe, seriously . . . I know that it doesn't look like much, but sometimes simple is better, right?  John and I both love kale and sweet potatoes, John loves lentils, (although I'm not a fan, there aren't many in this soup, and they are not the dominant flavor,) and I've come to realize I don't cook with leeks nearly often enough.  I even skimped and used dried thyme instead of fresh, then tried to make up for that switch by using half vegetable broth and half water, instead of all water like the recipe called for.  Slurp!  Plenty of leftovers -- some for the fridge, some for the freezer!

On the side -- buttermilk biscuits! 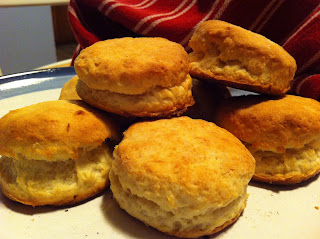 Buttermilk might be my new favorite baking ingredient.  Every recipe I've used it in bakes up light, fluffy, and tender, and has just the slightest sour tang.  Yum!  If you are interested in learning how to serially culture buttermilk, let me know -- I'll do a post.  It's so easy it almost doesn't merit a post, but I'd be happy to oblige! 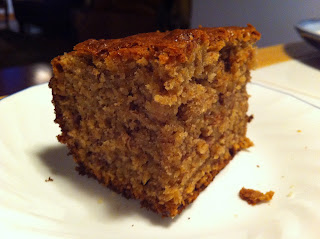 Peanut Butter Banana Bread
(By the way, I subbed sour cream for the yogurt called for in the recipe, as that was what John had on hand -- success!)  John doesn't much care for banana bread, but thought he might be able to enjoy it more if it was infused with peanut butter, one of his favorite flavors.  I think it's a hit, and I managed to use up all of the overripe bananas littering up his kitchen.  :)

And treats for my house: 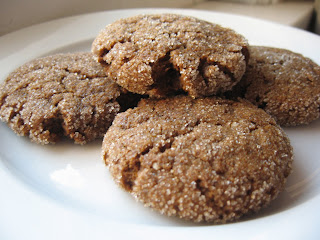 Pumpkin Molasses Spice Cookies . . . thank you, Mama Pea, for introducing the world to the softest, doughiest, chewiest, best molasses cookie EVER . . . let's just say I'm glad this recipe only made 24 cookies, because they are incredibly addictive.  These may be making a repeat appearance around the holidays at my house!

Let's hope we are able to keep the germs at bay for a while!  More cooking, please!

Oh man, sorry you were sick for so long! That sounds miserable. I'm glad to her you guys are feeling better and ready for hot soup action. :) Also, leeks! I need to get my hands on some of those immediately.

I am so happy to hear that you are both finally feeling better! Let me know if you need anything :-)

Lentil soup is the best! You really don't like lentils?! They are soooooo good! And good for you, too. I am glad you are able to stomach a few in that soup...the more the better!

Ooh - off to check out that banana peanut butter recipe - I've got some bananas to use ASAP.

Have you tried Mama Pea's pumpkin gingersnaps? I use dairy butter, but otherwise follow the recipe. I love them! I also love that you can make the dough in advance and whip out fresh baked cookies whenever you desire.

Glad you are feeling back to normal!