Stress, at least for me, means that I don't sleep much. I know that I will eventually get back to a place where I'm sleeping 8+ hours a night, but for now, I just don't think that's going to happen. I choose to look on the positive -- waking up early in the morning just means I have more time to work on projects, like making homemade instant oatmeal packets, right? :) 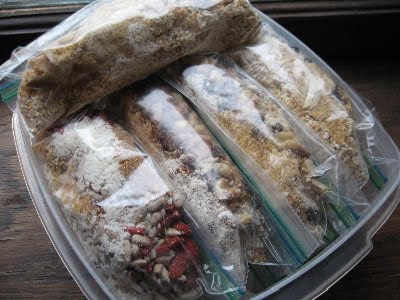 Inspired by this post from Crystal at Cafe Cyan, I picked up a few key ingredients earlier this week, (instant oats, maple sugar, and snack-sized ziploc baggies,) and had plenty of fun being an "oatmeal chef" this morning. :) I ended up with nine packets total, using about 3 1/4 cups instant oats. It was kind of fun, digging through my container full of different bags of dried fruits, assembling the packets and choosing different ingredients that I thought would "go" together. I thought briefly about labelling the packets, but then decided having a "surprise" might just be more fun. (And also qualify as the "lazy person's" approach.)

I did make a few subtle adjustments to her recipe, including omitting the protein powder (since I didn't have any on hand,) and I also reduced the sugar in each packet to two teaspoons. I know I'd LOVE to have a full tablespoon of sugar in my oatmeal, (and I'm sure there's WAY more than that in pre-packaged stuff from the grocery store,) but I also know I don't need it. :) Two teaspoons seemed like a decent compromise!

Weirdly, I discovered that I had purchased dried cherries WITH PITS! What the hell? I didn't know such a thing existed? I ended up using cherries in just one packet, meaning I only had to pit 2 tablespoons of cherries. I ended up just sort of peeling the fruit off the pit with my fingernail . . . messy, but it worked. WHAT should I do with the rest of the cherries? I can't see myself wanting to pit these, for some reason -- usually I'm fine with fussy kitchen projects, but this is a bit over the top. I might try and just snack on them out of hand, but that seems like a lot of work, too. Waa! Suggestions?
around 8:35 AM
categorically speaking: oatmeal

Yay - oatmeal packets! Let me know how they turn out once you use them.

Dried cherries with pits? Never heard of such a thing - what a bummer!

I'm sorry your so stressed. I am too and my sleep suffers as well. I like your attitude and what a great idea to make these!

Very strange the cherries had pits in them.