I had planned on making spaghetti for dinner last night, until I remembered that I had picked up a package of tofu and a package of tempeh at the co-op last Wednesday. I began flipping through VCON, until I found not one, but TWO recipes for tasty deliciousness that I had all of the ingredients for! 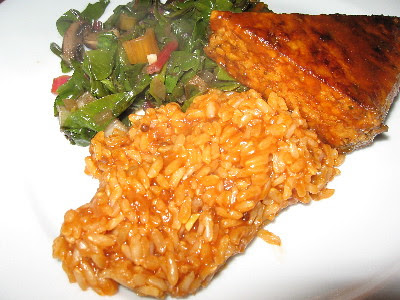 Hot-Sauce Glazed Tempeh, with sides of Messy Rice (both recipes from VCON,) and sauteed mushrooms and chard. YUM.

I made a couple of substitutions in the tempeh marinade, including subbing veggie broth for the wine called for, and apple cider vinegar for the lemon juice called for. This tempeh was AMAZING! So flavorful, with an almost addictive tangy-spicy flavor. The rice was also spectacular, and very easy. (I did use brown rice, since I didn't have enough jasmine rice on hand, and increased the water a wee bit.) We both loved the citrusy-ness of the fresh coriander. Mmmmmmmmmm.

So glad I have leftovers for lunch today! I sense it's going to be a happy Monday, all things considered. :)
around 8:28 AM
categorically speaking: brown rice, chard, mushrooms, tempeh

Oh yum! That messy rice looks really good. And sauteed mushrooms and chard? I will take the leftovers!

Isn't it great when you have all the ingredients on hand for a great meal to come together?

I agree the messy rice looks great, and sauteed mushrooms and greens sound great too!

Sorry, guys, but the leftovers are MINE! (Well, and I sent some home with Dan, too.)

haha, I was actually supposed to make the hot-glazed tempeh but I didnt have wine nor lemon juice. I was going to go ahead with it til I realized it was a whole lemon and I couldnt think of what I could substitute. So glad you made it, Ill be making it tomorrow with your substitutions :)

I've had agruments with people about tempeh vs seiten... Tempeh wins... esp with hot sauce!