Appropriately, I really tend to crave summer foods during the summer. Last night's dinner was no exception! 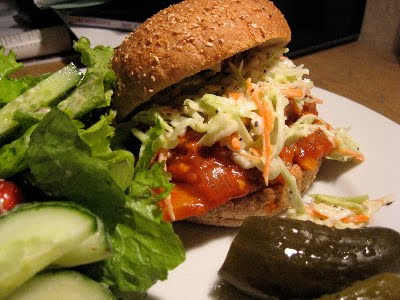 Pulled "Pork" BBQ Sandwiches, topped with homemade coleslaw, are always a huge hit at our house. Even though I don't generally love seitan, I do love it in this recipe! I made a few changes, of course -- I used a batch of homemade seitan, thinly sliced, instead of the prepackaged kind, and also added LOTS of Cholula to the sauce recipe, and a big ol' dollop of honey. (I do prefer my barbecue on the slightly sweet side.) I also find that this barbecue tastes better when made a few days ahead and allowed to sit in the fridge before rewarming. (Also makes dinner prep that much faster when it's time to eat!)

I think the only thing that would have made last night's dinner any more delicious would have been the addition of a few sweet potato fries and an ear of roasted corn! Oh well . . . I'll just have to make BBQ again when corn comes into season here. :)
around 6:43 AM
categorically speaking: barbecue, seitan

I have been looking for a good bbq sauce recipe...I may have to give this one a try!