Sometimes, I find excellent recipes in the strangest places, including advertisements for food products in magazines! I guess I shouldn't be surprised, really -- those folks design recipes that make their products shine! 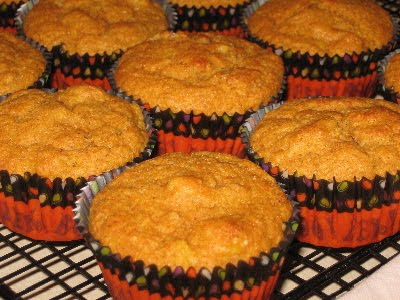 Since I can't ever leave well enough alone, I did make the following modifications to the printed recipe . . .
~ I used muffin liners instead of brushing the bottoms of the pans with oil
~ I used canola oil instead of extra-light tasting olive oil (it was what I had on hand)
~ I didn't bother mixing the sugar-cinnamon mixture and sprinkling it on top of the muffins -- just blended it all in
~ I used pumpkin pie spice instead of cinnamon
~ I used 1/2 tsp apple cider vinegar mixed with 2/3 cup almond milk instead of buttermilk
~ I used one whole egg, instead of 2 whites
~ I omitted the orange zest, just because I didn't have an orange in the house
~ I have smaller-than-average muffin tins, so I got 16 muffins out of this recipe

How are they, you ask? Fan-tas-tic!!! Moist, rich, subtlely spicy, almost buttery, with juicy-sweet chunks of pineapple throughout. These will make great grab-and-go breakfasts next week, (I love that they contain some whole-wheat flour,) keeping both Dan and I happy until lunchtime. :) I think these could only be improved by the addition of the suggested orange zest, and I will make every effort to include some in my next batch.

What?! You didn't use the Pompeian Extra Light Tasting Olive Oil?!?! Hmmmm :-) I always read the advertisement recipes too, and I have made quite a few of them myself. Why not, right?

I love the Halloween muffin liners!

YUM great idea!! I have a can of pumpkin just begging to be baked into something. I am going to try to veganize this without the egg.