Even though Dan and I decided to go out for dinner on Tuesday night, (to Saigon! for banh mi!), I did end up cooking a little something so we had plenty of leftovers for lunches throughout the week . . . 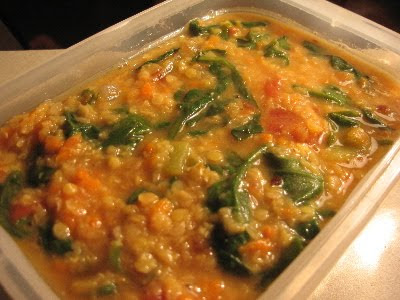 "Red Lentil Soup," from Moosewood Restaurant Cooks at Home. I added a huge amount of fresh spinach to this recipe, which was an excellent idea, as was more chili flakes than the recipe called for. Mmmmm! I also quickly cooked up a bunch of leftover half whole-wheat Artisan Bread dough into some chewy, flavorful naan.

Last night, it was time again for tacos! 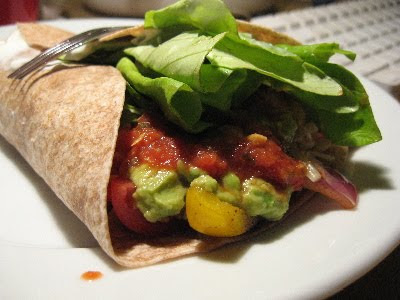 Whole-wheat tortillas stuffed with black beans, cast-iron fried peppers and onions, chipotle gouda, fresh tomatoes, lettuce, homemade guacamole, sour cream, and salsa. MMM! I always think of tacos as kind of an "indulgent" meal, but when I looked at the piles of produce on the counter last night as I was preparing to start cooking, I may slowly be changing my mind! :)

I love putting tons of greens in lentil soup...good call!