My friend Dora gifted me a celery root last weekend. (It's becoming less and less unusual these days for me to receive gifts of produce. Does this happen to anyone else?) To quote Dora, "I just want to see what you're going to do with it!"

After a little thought and a little research, I decided on soup. (Of course. 'Cause I love soup, you know?)

Other than picking up a leek from the co-op, I had pretty much everything on hand that I wanted to include in my soup: 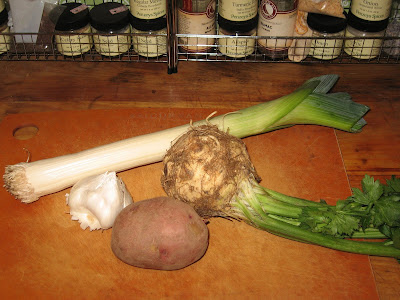 In addition to the leek, garlic, celery root, and potato, I also used olive oil, vegetable broth, salt and pepper, and a healthy splash of unsweetened almond milk at the end, for extra creaminess.

Even though the soup looks humble, it was fantastic! 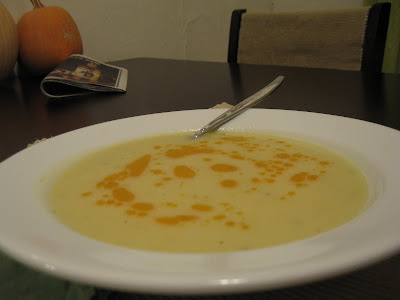 I drizzled a little harissa-infused olive oil over my bowl before slurping, and that just took it over the top. :)

While I can't say that the flavor of the celery root was all that strong, (truthfully, the finished product just tastes like a good, creamy, potato-leek soup,) it was fun to try out a new to me vegetable. Thanks for the inspiration, Dora!
around 6:23 AM
categorically speaking: celery root, garlic, leeks, potatoes, soup

I love celery root! My favorite way to eat it is in this pretty white salad: http://notwithoutsalt.com/2009/11/05/winter-white-salad/.

Kudos for trying something new! And harissa infused oil...yum!

I think people are definitely getting more into giving both produce and homemade foodstuffs. My neighbors have given me cucumbers and tomatoes; I've given big bags of pineapple guavas and homemade schnapps and pickles. The more the better!

I will say that I never know what to do with celery root, though. Your soup looks like a great way to put it to tasty use!