After a long day yesterday, (I had choir practice in the morning, and Dan and I ran errands on foot/via bus all afternoon,) I decided we were deserving of something a little special for dinner. I had been eyeing the recipe for Corn Chowder with Roasted Poblanos from The New Mayo Clinic Cookbook, so there you have it: 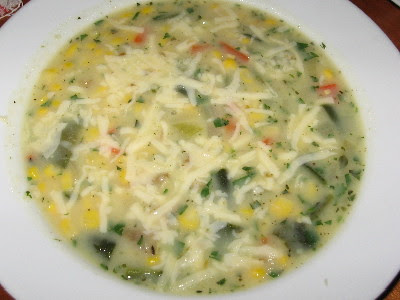 The only change I made from the original recipe was to substitute lite coconut milk for the 1% dairy milk called for in the recipe -- no noticible coconut flavor that either of us could detect. This change made the soup vegan, too!

We did, however, top the delicious vegan soup that I made with some shredded pepper-Jack cheese. The cheese definitely upped the deliciousness factor, in my opinion, but it would be great without!

And, 'tis the season to crave sweets, right? However, I haven't started my holiday baking, so I've been lacking in the dessert department. Enter: key lime pie! 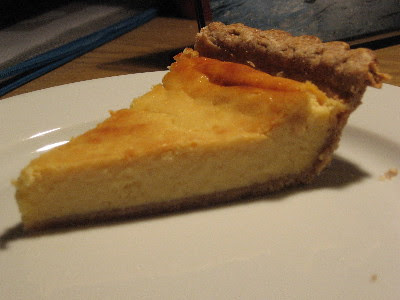 I swear this is the easiest pie in the world, containing only three ingredients: eggs, sweetened condensed milk, and lime juice. I had the pie in the oven in less than five minutes! (I did by a wholegrain, pre-made piecrust to speed things along further.)

I may start cooking dinner here in a few minutes, to beat back the "Sunday Night Blues." Weekends are ALWAYS TOO SHORT, if you ask me!
around 5:50 PM
categorically speaking: baking, cheese, corn, limes, peppers, pie, potatoes, soup

So glad you made the soup! I love that one. Thanks for the suggestion on my blog. I've been thinking of some sort of spanakopita thing.

yum! I printed off the chowder recipe to try

update: made the chowder and it was delicious!