When Dan and I were talking on the phone tonight, he mentioned he had ridden his bike to the Hampden Park Co-op this evening to buy some granola, since he had run out of my homemade stuff. Little did he know . . . 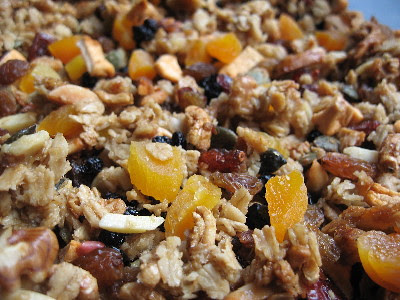 I was a busy baker this afternoon! I made a double-batch, loaded with tons of good stuff: oats and puffed kamut, almonds, walnuts, pumpkin seeds, blueberries, golden raisins, apricots, apples, and craisins! (Sweetened with maple syrup, and stuck together with Earth Balance.)

I love making granola -- it's so easy, tasty, and nutritious!

P.S. The cookies I made this afternoon are HEAVENLY! They are just the right combination of crispy-outside, chewy-inside, with wafty brown sugar aroma. (Is "wafty" a word? Eh, who cares!)

OH -- one more thing. Remember that gigantic bag of spinach I bought at the Farmer's Market on Saturday? I finally got around to stemming/washing it tonight, and decided to weigh it, just to see what kind of a deal I got. The spinach I bought weighed in at 14 ounces, (just under a pound,) for $2. I don't know about you guys, but spinach bulk at my co-op can be more than $7 a pound! What a deal!

One more reason to shop from your Farmer's Market!
around 9:51 PM
categorically speaking: budgeting, granola

the grapefruit bread is from an article in Vegetarian Times magazine. i posted the link under the picture on my blog :)

I can't wait to go to the Farmer's Market this weekend! Which one did you go to?

The dried fruit in that granola sounds like a great combo--and it LOOKS delicious too!

Wow! That looks very tasty.
Thanks for visiting my blog and commenting. I appreciate it.