I threw a "make your own pizza" belated birthday celebration for my friend Tiffany last night, and we had a blast!  Since only a few of us could make it, we were able to cram around my dining table, smashing out pizza dough, spreading sauce, layering toppings, and sprinkling cheese relatively comfortably.  I provided the dough, (I used this recipe, instead of my usual Artisan Bread in 5 dough, as I find the AB dough kind of hard to work with if you're not used to it . . . my instincts were right on, as John exclaimed almost immediately, "wow, this is a LOT easier to use than that other dough!"), two kinds of sauce, (prepared pesto from the co-op deli, and Muir Glen pizza sauce,) and four kinds of cheese, (mozzarella, parmesan, fontina, and feta,) and friends brought the toppings: 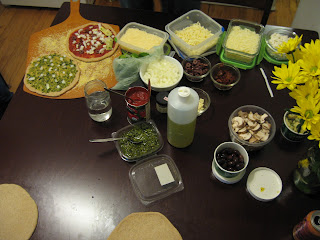 We had lots of olives, lots of mushrooms, onions, garlic, spinach, dried tomatoes, artichokes, capers, oregano, and chili flakes.  So many choices, I had to make my pizza in "halfsies" -- 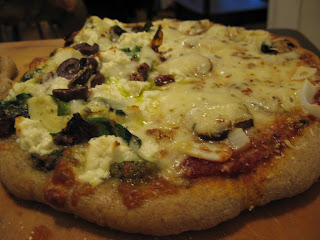 For our salad, I made a new kale slaw: 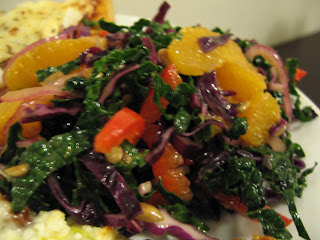 I found a recipe on the Whole Foods website that looked delicious, but the dressing quantities seemed a little "off," in my opinion.  Here's my modified recipe:

Whisk the dressing ingredients together in the bottom of your serving bowl until emulsified.  Add:
1 small red onion, thinly sliced

Toss the onion in the dressing until it becomes completely coated.  (You want to lightly "pickle" the onion, to take out some of its sharpness.)  Then layer in the bowl:
1/2 small head red cabbage, shredded
1 large red bell pepper, sliced thinly
1 bunch dino kale, ribs removed and sliced thinly
1 cup orange sections

Cover and chill the salad for at least an hour.

Just before serving, toss everything together with:
1/3 cup sunflower seeds, toasted

After eating so many virtuous vegetables, make sure you save room for dessert! 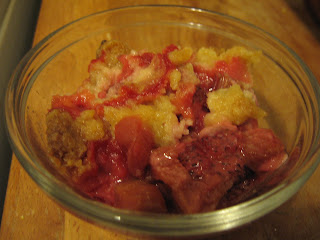 I was gifted some rhubarb earlier in the week, so strawberry-rhubarb crumble was the logical dessert choice.  :)  (Plus, the birthday girl loves rhubarb!)  I promised Ali I'd post the recipe, which is loosely based off the "Apple Crisp" recipe from Joy of Cooking, but with a few of my own modifications.

DIRECTIONS:
1. Fill the baking dish with the fruit.  (If you use a large quantity of berries or any frozen fruit, I recommend tossing the fruit with a few teaspoons of cornstarch.  And thaw and drain any frozen fruit!)
2. Combine the sugar, flour, and butter.
3. Using your fingers, break the sugar/flour/butter into small clumps, and sprinkle evenly over the fruit.
4. Bake at 375 for 50 to 60 minutes, or until the fruit is bubbly and the topping is golden brown and crispy.
5. Serve warm or at room temperature, with ice cream or a drizzle of heavy cream.

I had so much fun with the "build-your-own" dinner party, that I might have to look for more things like this to do in the future!
around 7:41 AM
categorically speaking: cheese, entertaining, fruit crisp, kale, pizza, rhubarb, salad, strawberries

GREAT party! Thank you so much for hosting! I can't wait to try that fruit crisp recipe!

Yay! Make your own pizza is one of my favorite parties--we've been making it a tradition for christmas eve. :)

just came across this blog from a HeavyTable link, everything looks delicious and is making me hungry! looking forward to more posts :)