We stopped at Betty's Pies, which is located along Hwy 61 just north of Two Harbors. 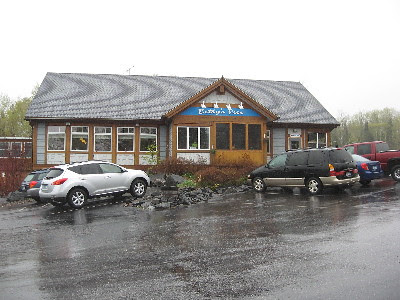 We had heard great things about Betty's Pies, and decided to try it out, at least for a snack. We ordered coffee and a slice of pie apiece, (blueberry for me, key lime for Dan -- his all-time favorite,) and waited patiently. A few moments later, our pie arrived: 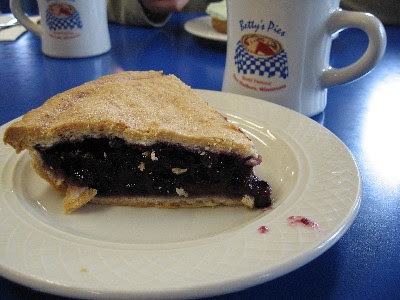 I hate to be so blunt, but we were sorely disappointed. Dan's pie looked sort of revolting, and not like any key lime pie either one of us had ever tried. It sort of reminded me of those fluffy green-jello salads you used to see at potlucks when you were a kid -- the kind with crushed pineapple and multi-colored mini-marshmallows? Dan said that was kind of what it tasted like . . . ick. My blueberry was okay -- a little overly sweet, and not nearly as good as the slice of strawberry-rhubarb I had had at the Angry Trout the night before. (I did split my slice with Dan, however, since his was so awful!)

In the end, despite the lousy pie, the coffee was very good.

We paid, and decided to officially cross Betty's Pies OFF our north shore mental list of places to visit. (Sheesh! Why is this place such a legend??) Heading south, we had one more hike planned before the conclusion of our trip.
around 8:25 AM
categorically speaking: North Shore, travel