We woke this morning to rain, cold (low 40s!), and wind. Ugh! After two days of reasonably beautiful weather, it was almost like a slap in the face. Phooey! As we packed up and checked out of our hotel, we hemmed and hawed over our plans for the day, realizing we were going to have to make some changes because of the weather.

Breakfast, however, was a no-brainer this morning -- how can one NOT try someplace claiming to make the "World's Best Donuts?" 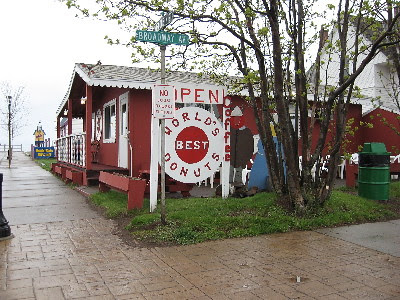 Dan ordered a jelly-filled, and I ordered two cake donuts, plus a coffee apiece. 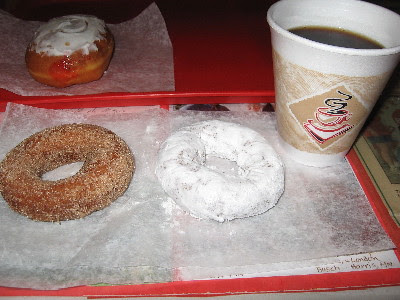 First, the coffee was delicious, especially considering it was served in a foam cup. The ambiance was spectacular -- the back room, or "coffee room," as it was referred to, was packed full of people, photos, trinkets, and other odds and ends. The booth we chose was decked out with photos of people with their "World's Best Donuts" mugs, travelling all over the world. So much to see and hear.

And the donuts? Definitely the best donuts I've ever tasted. Rich, moist, sugary, and downright delicious. (I could only eat one and a half, though -- I'm not used to rich food like that first thing in the morning. Dan helped out with my remaining uneaten half, though.) Once we finished our donuts and second cups of coffee, we decided to venture out into the weather and spend some time hanging out in Grand Marais.