The May Daring Bakers’ challenge was hosted by Linda of make life sweeter! and Courtney of Coco Cooks. They chose Apple Strudel from the recipe book Kaffeehaus: Exquisite Desserts from the Classic Cafés of Vienna, Budapest and Prague by Rick Rodgers. 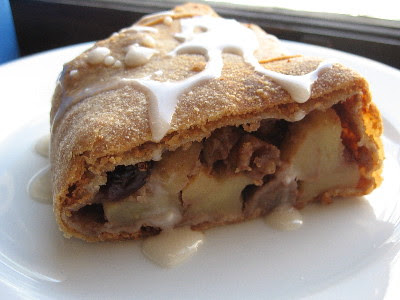 I followed the challenge recipe fairly closely this month. I made a half-recipe, added extra cinnamon (per some brilliant Daring Baker's suggestion,) and used dried cranberries instead of raisins. The only switch for veganizing was using Earth Balance instead of butter. Very delicious! This reminded me of "Racine Danish Kringle," which I've never seen outside of southeastern Wisconsin -- a great throwback to my childhood. (I'm sure I've had apple strudel before, too, but nothing nearly as delicious as this!)

The most challenging part of this month's challenge was making and working with the strudel dough. I found the dough relatively easy to work with, and was able to get it quite thin. (I did let my dough rest for nearly three hours . . . time got away from me!) However, I cut off nearly a third of the dough around the edges, even though I had the right-sized rectangle according to the directions . . . hmm. Perhaps I'll keep stretching next time, so I have more than two layers of flakiness around my filling!

Thanks for a fun challenge, Linda and Courtney!
around 6:59 AM
categorically speaking: apples, baking, Daring Baker's Challenge, vegan baking

My good girlfriend is from Racine. I'll have to ask her if she knows of the Racine Danish Kringle.

I've been meaning to do the Daring Cooks challenge, but haven't gotten to planning it yet.

Great job! I agree the dough as so easy to work with, though I didn't get mine extremely thin either.

Beautiful job! I should have made some lovely glaze to drizzle, too!

OMG--that looks and sounds SO good! Why didn't you tell me about this?! YUM! I am in love with all things apple :o)

Where could we find the recipe?

The icing is a good idea, I thought the apple filling needed a bit more sweet!

I made mine almost exactly as you made yours. Yours looks really nice with the glaze.

Beautiful strudel!! It's always so nice when you don't have to alter the recipe to drastically =D.