Cooking projects from the past few days . . . 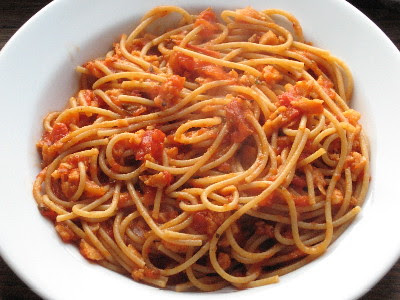 Sometimes, all you want for supper is a big bowl o' whole wheat pasta with a little rehydrated TVP and jarred marinara tossed in. The simplest foods are sometimes the best.

Next, pumpkin part I: 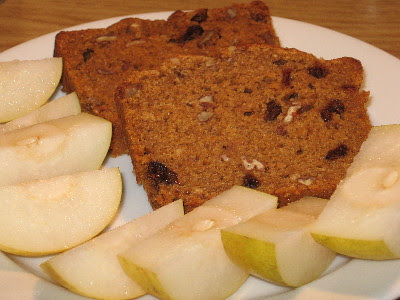 I used Vicki's pumpkin muffin recipe, altered it a little bit, added some pecans and dried cranberries, baked it in a loaf pan, and voila! Yummy vegan pumpkin bread. Mmmmm . . . (and that's an asian pear on the side -- breakfast yesterday morning. With coffee, of course. I'm trying french vanilla Silk creamer this week -- not as awesome as the hazelnut, but still yummy.) 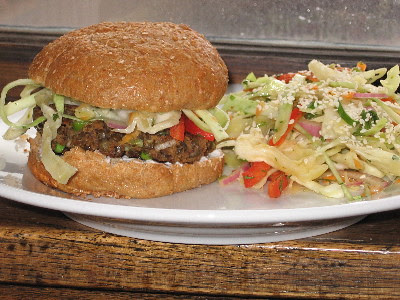 This is a recipe I've been thinking about for the cookbook for ages and ages, and just now got around to testing. I was pleasantly surprised this first time round! The seasonings seem to be spot-on, although the texture is ever so slightly mushy. I'll try baking them next time, instead of pan-frying!

Oh yeah -- and that asian style cole slaw on the side? Totally made-up, totally fabulous, and totally WAY too much cole slaw for one person. If you plan on stopping by my apartment sometime this week, prepare to take cole slaw with you when you leave! I don't want to turn into a giant cabbage! (Although, that would be a convenient Halloween costume . . . !)
around 1:12 PM
categorically speaking: pasta, produce, quick bread, vegan baking, veggie burger

All of that looks completely fabulous!! I know the last thing you probably need is another pumpkin dessert recipe, but I thought I'd share my family's fabulous Pumpkin Chocolate Chip cookies with you anyway, because they're my favorite thing ever! Here's a link to the recipe: http://community.livejournal.com/vegancooking/1818233.html

I will gladly take home some cole slaw with me! : ) The lentil patty sounds yummy! And the pumpkin bread looks fantastic(I can only imaging how your house smelled while it was cooking!), do you care to share your small modifications??

Congrats on your jobs! I know teaching is way more important and serious, but I'm so jealous of you working in a kitchenwares store- if it was me I'd spend all my income at the store...
And the food looks great. That cole slaw in the last picture looks especially satisfying.

congratulations, catherine on your teaching position & at the kitchenwares store -- both sound wonderful & complimentary to another! i'm excited for you. i'd love to come by & take some of that delicious looking asian cole slaw -- and way to go sprucing up the pumpkin muffin recipe. i totally love it! and that vegan concrete is pretty cool -- somebody has wet concrete & that's what they decide to make permanent. goood choice i say! :o)

I love coleslaw..I need to eat it more often. It's just a head of cabbage is so big, I never get through it.

Teriyaki lentil burger?!?!?! Where have you been all my life? :)

Coleslaw is one of the only ways I can tolerate cabbage.

Lindsey, thanks so much for the recipe offer, but I think I'm going to make a pumpkin pie, believe it or not! I finished the apple pie, and pumpkin pie sounds REALLY good right now . . . !!

RK, I would usually gleefully share my modifications, but with Vicki's permission, I'm going to include my modified version of her recipe in my cookbook . . . so, when I get to that stage, you're more than welcome to test it for me!

Bazu, thanks! The coleslaw was awesome, but I overdid it a little yesterday . . . I had quite the tummy ache last night! Ooops. :)

Megan, I picked the smallest head of cabbage I could find at the co-op, and it still made quite a bit, especially when I added all of those other yummy things to it. Sigh. Me = giant cabbage person.

Nikki, when I nail down the preparation instructions, you are more than welcome to test-drive the teriyaki lentil burger for me!!!