Thank God for friends with cars! Although I relish my car-free lifestyle 99% of the time, every once in a while, it's nice to have friends with cars. Like tonight, for example -- after I treated both of us to Chipotle for dinner, my friend Ann was kind enough to drive me to the co-op! See why? 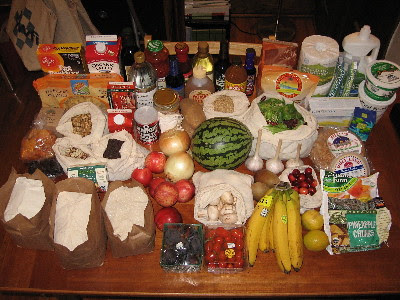 I needed a LOT of staples. How is it that I always seem to run out of EVERYTHING, at the SAME TIME??? Anyhow, here's what I bought:

You may notice that there are a few items in this list that disqualify me as a strict "five or fewer" follower . . . I needed a couple of special items for recipes, and no, there's nothing wrong with my soymilk maker. I need a large-ish quantity of soymilk for a secret baking project, and am worried about homemade milk curdling when heated. So there -- I broke down and bought commercial soymilk!

Obviously, there will be some cooking this weekend. Until then!
around 9:49 PM
categorically speaking: grocery shopping

Wow! Total supreme-o score at the Co-op! I'll be waiting to see what you made with all of this. Have a great weekend!

Wow, a ton of food. We don't have a car either, nor do we have generous friends, so we rely on taxis to get us home from the grocery store. Better than biking or busing!

Isn't it a great feeling to get home and put all that food away, knowing your house is stocked for whatever cooking emergency might come up?

I love not having a car either, but there are times when it is nice to really be able to stock up, so I also appreciate friends with cars who are willing to take me to make bulk purchases from time to time.

But wowsa, that's a lot of grub!

Yum--fresh figs! What a treat! They didn't have them last time I was there (and I have been checking for them constantly--I love them)...I will have to go get some soon!