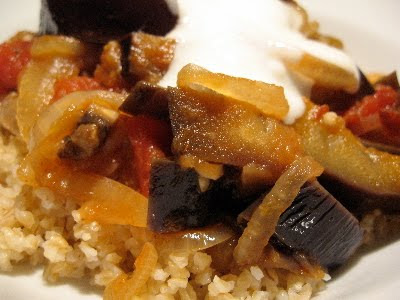 The recipe called to serve the eggplant over bulgur, (and suggested toasting the bulgur in olive oil first -- heavenly!) and then to top with plain yogurt. This was so fantastically delicious! Yum! Truthfully, I don't think I'd change a thing about this recipe -- it was quick, hearty, healthy, and delicious!

My first priority last night, however, was making another batch of zucchini cookies: 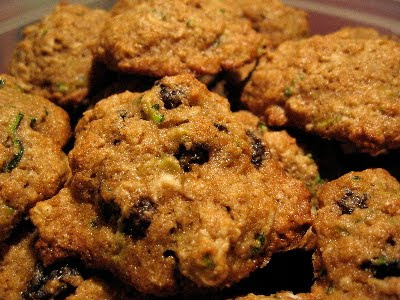 Last weekend's batch is already gone! The horror! The children had been asking me to bring some in, so I had to whip up another batch ASAP. Unfortunately, baking took up my yoga time last night -- I think the moral of the story is, I'm not very good at doing something EVERY DAY, besides, well, you know, sleeping, showering, and brushing my teeth. I'm too busy!

I'll keep trying with the yoga, though -- we'll see how the rest of the month goes.

Eggplant cookies?!?! Who do you think you are? ;) Those look amazing!

As much as I've tried, I am not a huge fan of eggplant...nevertheless I persevere to find a recipe that makes it shine!