It's eggplant season! Woo! Since we both love eggplant, I've been trying to cook with it once or twice a week, until we're no longer able to get local eggplants at the market. It's one of those veggies I just haven't figured out how to preserve yet, (given my limited space and ability with preservation,) so I figure, I better get my fill while the gettin' is good! 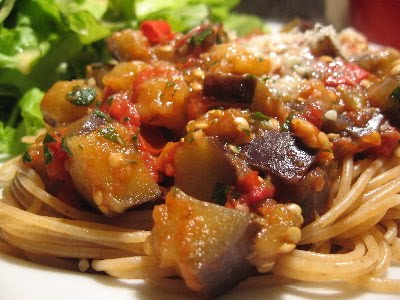 This was wonderful! I appreciated a quick and easy recipe on a dreary Friday night after a long and exhausting week, and the creaminess of the eggplant paired beautifully with the tangy tomatoes and hearty whole-wheat pasta. I pretty much followed the recipe as written, except for doubling the amount of chili flakes called for. (What can I say . . . we like spicy food!) I also put out the parm at the last second, since in Dan's world, it's not pasta without cheese. :)

What seasonal produce have you been gorging yourself on lately?

Any awesome eggplant recipes you care to share? I think we still have a few weeks left!?!?!
around 9:15 PM
categorically speaking: eggplant, pasta, tomatoes

I have not appreciated Eggplant much until recently. It has been in many of my dishes over the past week or two. I am really starting to enjoy it!

I am loving eggplant right now too. I have been making baba ganoush weekly, cutting it up and roasting it with zucchini and cauliflower, and using it in ratatouille! I have also been gorging on tomatoes, zucchini, WATERMELON, and apples! Yummmmm :-)