After being sorely disappointed because one of the stores we planned on visiting was CLOSED, (who's closed on a Sunday these days????), we ducked in to Kitchen Window, (my former employer,) for a quick browse, since we were in the 'hood and neither Liz nor Sarah had been there before!

Drooling over kitchenwares must make a person hungry, because by the time we arrived at our third destination of the afternoon, we were all seeing a little red . . . time to eat, NOW!

Thankfully, we were at just the right place to get an awesome snack!

Locally, the Holy Land is somewhat of a legend . . . I've been coming here to eat since college, you can buy their hummus all over the cities in co-ops and regular grocery stores alike, and they even had coverage in the New York Times not too terribly long ago! Owned by a local family originally from Kuwait, they use "Mama Fatima" recipies, handed down for generations, for many of their foods and products.

So, snack time! Liz, Sarah, and I ordered two appetizers to share -- the appetizer sampler platter, which included hummus, baba ganouj, stuffed grape leaves, and falafel, and also the fava bean puree. Loaded down with dips and pita, we went to town!

After refueling, it was time for more shopping! Dan and I frequently hit up the Holy Land for things like olive oil, dates, and our favorite -- the olive and feta bar! 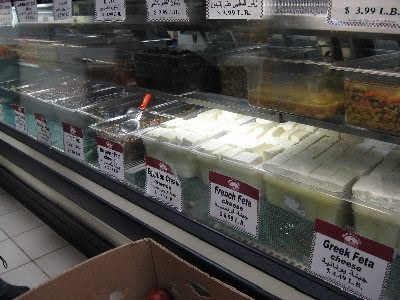 Although I didn't pick anything up here this week, (I just stocked up on olives when they went on sale at the co-op, and we don't really have a "need" for feta this week,) Liz and Sarah scored some beautiful olives and pickled veggies! Yum.

I did buy a "few" other things, though! 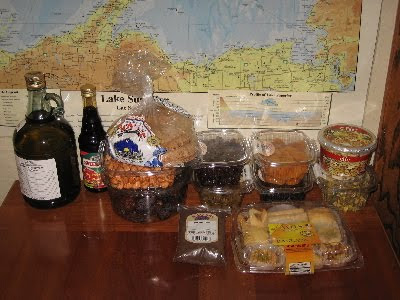 Don't forget to check out Liz's blog to read her review of the Holy Land Deli.

there is a great recipe for tofu with a pomegranate molasses bbq sauce in Vegan with a Vengence. We go crazy making that with roasted veggies & rice/quinoa every fall! We have put the sauce on chicken too, since we eat meat. It's so delish!