When you think about it, there aren't too terribly many gadgets out there that one would explicitly label "vegan." However, this guy is one of my favorite things in my kitchen and gets weekly (at least) use! 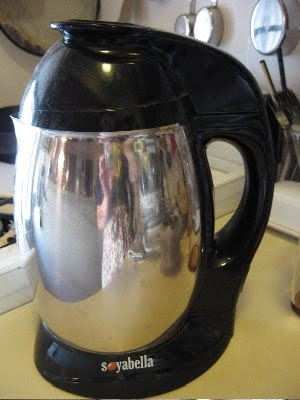 Yesssssssss . . . that is a Soyabella soy milk maker! Now, I know what Alton Brown says . . . "never own a unitasker." Well, this isn't a unitasker, people! You can also make nutmilks in the Soyabella, and that's actually my favorite thing to do with it! Although I enjoy homemade soy milk, I find nut milks, (specifically almond milk,) tastier and even faster than running the soy milk function.

How easy is homemade almond milk, really? Well, I soak about a half-cup of almonds in water for at least six hours, drain and rinse them, and put them in the "milk screen." I add water to the line, run the mill function five times, and, voila! 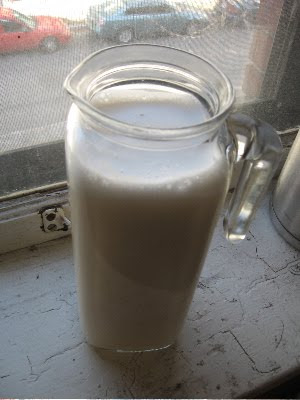 A quart of freshly-made almond milk, costing next to nothing, creating no packaging waste, and taking almost no time! (I like to add about a tablespoon of agave, a half-teaspoon of vanilla, and a pinch of salt to my milk, too, but it's pretty tasty on its own.)

The Soyabella is quite expensive, but I was able to score mine at a deep discount when I worked at the kitchenwares store . . . and it's been SO worth it! I definitely think it's paid for itself twice over in the years that I've owned it, and it's still kicking strong!

Now, as much as I love my Soyabella, you can make nut milks without one -- you just need a blender and some cheesecloth or a mesh bag to strain the milk through. Combine the soaked almonds with about a quart of water, blend away, and strain! Easy enough! I think soy milk would be a little harder, though, so if you prefer that, the Soyabella would totally be the way to go!

I want one of these! I am not too into gadgets, but I do want to start making my own tofu and I know a soymilk maker makes the process a bit faster and easier.
I have made pumpkin seed milk with my junky little blender.

While not "vegan", my favorite kitchen gadget is a tie between my salad spinner and the Vita-Mix...I love them both!

And yes, the hubs is a crust snob LOL! He didn't even eat his whole portion, figures... :)

I really love my soymilk maker.. but I'd say hands down my vita mix... and my food processor. I'd be so lost without them

Damn! We use a blender to make our almond milk, and I am *this* close to convincing my husband that we need a Vitamix. I really want this gadget, but not until I get my new mixer. ;)

ooh I wish I had one of those!

I wish I had one of those too!

Where do you buy your bulk soy beans to make the milk?