As a vegetarian, Thanksgiving has always been about the side dishes for me -- but when preparing a full-on veg Thanksgiving, I feel compelled to make some sort of "main dish" or "entree" portion of the meal. While I would be happy gorging myself on sides, others might miss something "meaty."

What to make? I have tried stuffed squash and pot-pie type entrees in the past, both of which I've found too filling, taking up way too much precious "side dish" space in my tummy! (Oh yeah . . . and don't forget about "pie space!") I thought about making some sort of seitan roast this year, but even though Dan looooooooves all things mock meat, I've never been a seitan fan. What to do? Chickpea Cutlets to the rescue! 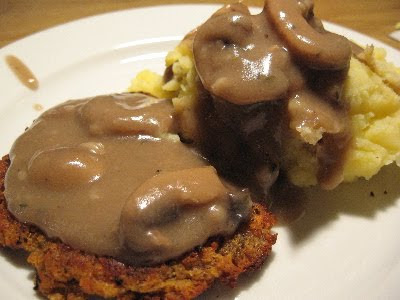 Pictured with the cutlets is a side of garlic-mashed potatoes, (no recipe necessary at my house -- just boil up a bunch of potatoes with many cloves of garlic, and mash with Earth Balance, salt, pepper, and homemade, unsweetened almond milk until creamy,) and my now go-to standby, Mushroom Gravy. While mashed potatoes aren't traditionally on my family's Thanksgiving table, they are a MUST for Dan, and as far as I'm concerned, it's another avenue for gravy, right? Yum!

I would make the Chickpea Cutlets again in a heartbeat -- the base is easy enough to whip up ahead of time, (and I've even pre-stretched the cutlets and stored them in the fridge between sheets of parchment,) and fry up in no time. I easily kept this double-batch warm under a foil tent while I finished mashing the potatoes and tying up other odds and ends. Dan's brother, Ryan, joined us for dinner, and this was one of the things Ryan went back for -- and when really hungry, Dan can take down two to three cutlets in one sitting.

Those cutlets look and sound great. My fave side dishes are anything to do with sweet potatoes and yams. Also maple glazed brussel sprouts are a fave.

That gravy looks like it should be on everything! Soooooooo goooood!