Flashback to 1997/1998 . . . my dorm buddies at the University of Minnesota and I had a thing for Campbell's "Chicken and Stars" soup . . . so much so, that I think one friend had at least ten cans stashed in her dorm room at one point! (No such thing as a "Chicken and Stars" emergency for us!) I remember slurping that soup fondly, late at night, maybe while studying, maybe while just staying up WAY too late, given I usually had a 9 AM class! :) Ah, college. Remember when?

Fast-forward to 2010 . . . I no longer eat chicken at all, and truthfully, I can't remember the last time I've had canned soup. (We do buy the boxed soups occasionally in a pinch, but canned soup is a whole 'nother species, if you ask me! Why? Don't know.) BUT, during Liz's and my "Blogger Ethnic Market Tour" a few weeks ago, I picked up a package of star-shaped pasta at El Burrito Mercado, and I've had Chicken and Stars on the brain ever since!

Tonight was the night! I didn't really use a recipe for this one, just threw a few things in the pot, and made some soup! 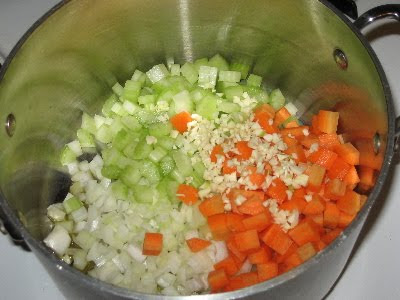 2. Add 2 quarts of good-quality vegetable broth; bring to a boil. 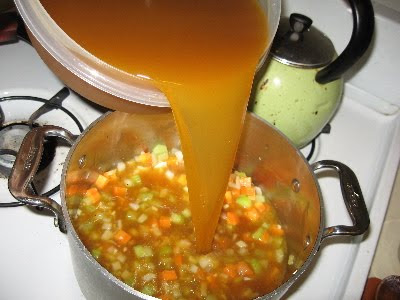 (I used a combination of some homemade broth, a quart of low-sodium organic broth, and water, simmered with a billion cloves of garlic, some extra thyme, and a little paprika.) 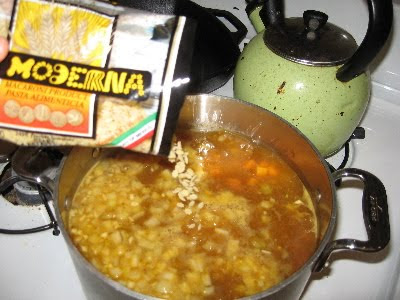 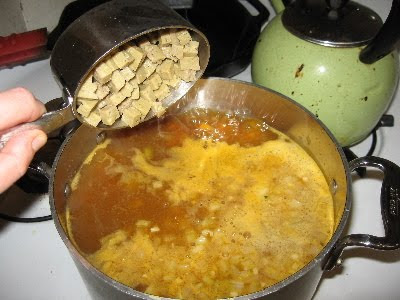 5. Simmer the soup for 15 minutes, covered, stirring at least every 5 minutes, (you don't want your starts to stick to the bottom of the pot!), or until the pasta is done. Finish with a tablespoon or two of lemon juice, and a few tablespoons of chopped fresh parsley! 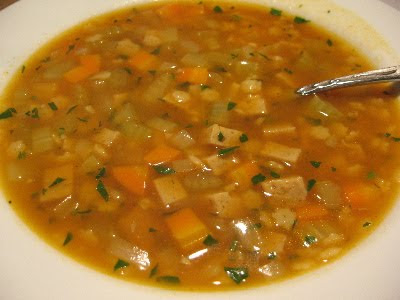 While my "Chicken" and Stars is much different than how I remember it, that's probably a good thing! :) Next time, I'll probably use more garlic and less lemon juice, (I actually used the juice from a whole lemon -- I adjusted the directions in this post accordingly!), but this first stab at recreating my "classic" hit the spot tonight!

What weird food were you into as a teenager/young adult? In addition to Chicken and Stars, I confess to eating so much "Easy Mac" that, to this day, I can't look at a box of it without gagging, and also totally OD-ed on Nutrigrain bars. Never really got into ramen, though! Weird.
around 8:44 PM
categorically speaking: faux meat, pasta, soup

Mmmm that soup looks yummy, I'm not much for canned soup, this looks much, much yummier!
Nice ad simple too!

While I've never had Chicken and Stars soup, I did live on Easy Mac for quite awhile. So much so that it was my trivia nickname for years.

Oh college!
I remember the first year living in a house I was obsessed with canned green beans (french-cut) I believe...? So random! I'm still obsessed with green beans, but not from a can!

I sometimes miss chicken soup, and this seems like a good substitution. When I was younger I overdid it with michelina frozen dinners. I haven't eaten one in years, and even thinking of it kinda turns my stomach. Thankfully I'm not missing out on much health-wise :)

When I was a little girl I used to eat canned chicken noodle.. I would pick out the chicken.. my grandparents were always trying to feed us meat!

"I didn't really use a recipe for this one, just threw a few things in the pot, and made some soup!"

I think that is the BEST recipe for soup, lol! At least, that is always how I make it :-) Your soup sounds great! When did you become a vegetarian, by the way?

Oh dude, I LOVE that brand of noodles! Their cut spaghetti-shaped ones are sweet.