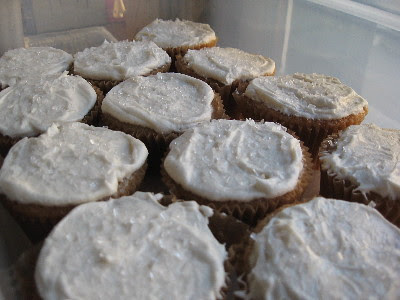 "Lemon Gem Cupcakes" from Vegan with a Vengeance. I didn't make Isa's lemon frosting, however -- my buttercream intuition kicked in, and her recipe seemed to call for way too much liquid, in my amateur opinion. So, I made a simple lemon buttercream out of Earth Balance, powdered organic sugar, vanilla, and lemon juice. Delicious!

Cupcake for breakfast, anyone?? 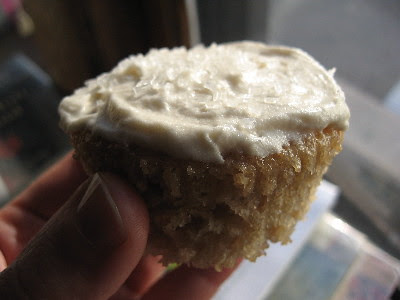 I made "Vanilla Ricotta Muffins" from Mollie Katzen's Sunlight Cafe this morning, just to have on hand . . . 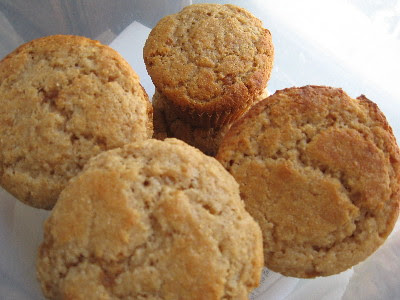 Not much to look at . . . but mighty tasty! Even though the recipe said the yield was 8 to 10 muffins, I ended up with 12 . . . could have been 13, actually, but I didn't want to waste all of that electricity just to cook one additional muffin!

And, I made kamikaze pancakes for brunch this afternoon: 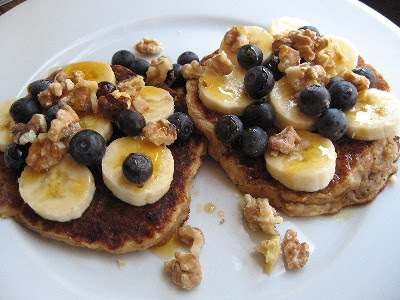 I used the recipe for Banana-Oatmeal Hotcakes with Spiced Maple Syrup from The New Mayo Clinic Cookbook, and topped the 'cakes with sliced bananas, fresh blueberries, and toasted, crushed walnuts. The pancakes were awesome, even though a bit labor-intensive to make -- the pancakes were strangely buttery-tasting, although there was no actual butter in them! I'd skip the spiced syrup next time -- I didn't get any cinnamon-clove flavor from the syrup, so in my opinion, it wasn't worth the extra effort (and extra dirty saucepan!)

oh my the cupcakes look delicious! thanks for posting!

I *just* bought the new Mayo Clinic Cookbook after a friend talked up these very pancakes! {and all the other awesome-sounding recipes}