My grocery shopping night is typically Thursdays, but I'm postponing the shop until the weekend this week -- Dan and I plan to go out for dinner tomorrow night, so I won't need anything until Saturday at the earliest! (And on Saturday, I can take Dan's car, instead of having to walk back with all of the food!) Plus, postponing left me time for a lengthier yoga practice this evening.

I did 45 minutes of "Yoga Conditioning for Weight Loss" tonight, which is probably the most physically challenging practice I have access to at this time. I really appreciate that the DVD offers a "combined practice," which follows four instructors simultaneously, each demonstrating increasing levels of difficulty, with appropriate modifications. I find that I can do many of the poses nearly fully, but it's nice to see modifications where I need them. I'm glad I had the time and energy to do this tonight -- it was great! My abs may be sore in the morning, but I'll recover, I'm sure. :)

In yoga-related news, I have been doing more yoga with the 2- and 3-year-olds that I teach, and they are loving it! I've taught them "turtle," tree, cobra, cat curls, downward dog, chair, and have started taking them through sun salutes. I'm amazed at how well they focus when we do yoga! I haven't pushed them past five minutes or so, but it's been fun. This is a little selfish of me, but hearing their little voices say "namaste!" is so cute!!!

The muffins were a HUGE hit last night, although I had way too many leftover -- we had a shorter-than-usual break, so folks didn't have much time for munching. The spiced cocoa muffins were especially popular! I was surprised, but pleasantly so. :) (Coworkers were pleased with the extras this morning, too!) 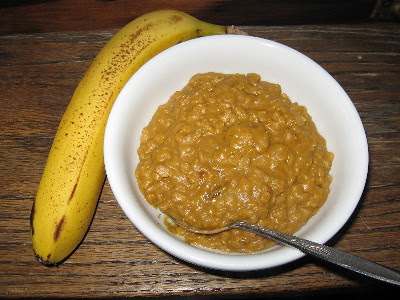 I gave oatmeal a try again this morning, and loaded the heck out of my bowl, in the hopes this traditionally "light" breakfast would stick with me longer than usual. The oatmeal contained almond milk, canned pumpkin, maple syrup, a pinch of salt, an eigth-teaspoon of pumpkin pie spice, and a spoonful of sunbutter. I had to sort of force the whole bowl down, not because the taste was poor, but I was getting pretty full nearing the end! I enjoyed the banana later at work, but somehow, I was STILL very hungry by lunchtime! What am I doing wrong, here??? 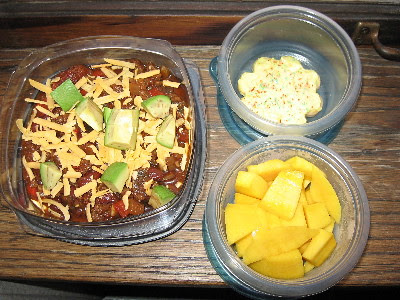 The last of the chili with shredded cheddar and avocado, some diced mango, and a cookie.

Mid-afternoon:
I had to go to the coffee shop to pick up a pound of beans, since I'm postponing the co-op until the weekend, and of COURSE you get a free beverage with beans! I enjoyed a medium soy latte. Nummy. 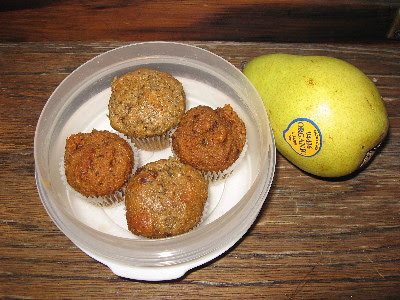 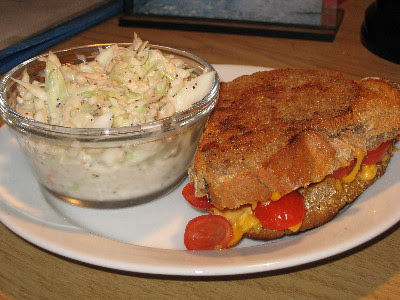 Dinner was sort of a train wreck tonight, although it tasted fantastic, in the end. I decided I wanted a grilled-cheese sandwich, then realized I'd have to bake some bread. No problem . . . Artisan Bread to the rescue, right? Well, that's where the problems began. My loaf shaped and rose just fine, but then I killed my oven when I threw the water on the bottom for steaming the crust, so I had to quickly mess around with getting the pilot light re-lit, then get the oven back up to temperature ASAP! Then, I checked on the bread ten minutes before it was supposed to be done, and it looked and "tapped" done, but it wasn't . . . by the time I hacked around the uncooked core, I had two haphazard, mismatched slices left with which to make my sandwich. Oh well -- grilled cheese is grilled cheese, no matter what it looks like, right? I added some tomatoes to my sandwich, too, and coleslaw on the side. And I'm going to go take my vitamin, and enjoy a cookie, too. :)

I'm SO glad tomorrow's Friday! And I have a three-day weekend, too!
around 8:35 PM
categorically speaking: exercise, FLOG, kids say the darndest, yoga

LOVE that you are doing yoga with the kids! When my kids were little, I used to be a yoga junkie... and during the summers, I'd "teach" a yoga class every day at 4pm in my living room.. it was awesome! All the neighborhood kids would show up, we'd light incense and put on cool music and do the poses.. the kids took to it sooo much... I had kids from 4-16 come over .. fortunately I had a HUGE living room at the time..